The Little. The robot class NanoSumo 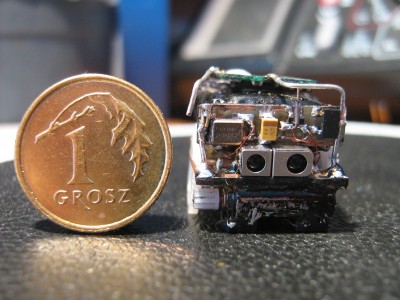 User dmega8 presents the smallest robot in the class of NanoSumo named the Little, which is designed to pass "maggic barrier" of 25 mm. The aim of the project was to build a robot with dimensions smaller than 25 mm x 25 mm 25 mm. Thanks to the use of miniature motors, sensors and power cells the dimensions 15 mm x 15 mm x 15 mm has been reached. Photo of the robot is shown in figure 1. By preserving the autonomy and other characteristics which the sumo-robot has to have, The Little can participate in NanoSumo class robot competitions.

The construction of the robot consists of four panels of laminate thickness from 0.4 mm to 1 mm. This is shown in figure 2. 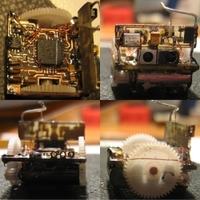 The motherboard contains ATmega8L in MLF case, the APDS-9700 chip made by Avago Technologies, which is used to support an optical rangefinder HSDL-9100 made by same manufacturer. In addition to the above-mentioned systems, there are several passive components and a socket for programming. On the botttom of the motherboard is located the axle which is made of copper wire with a diameter of 1 mm. You can see the motherboard in figure 3. 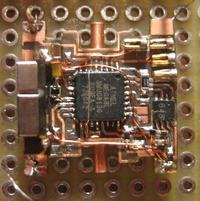 Reference voltage 2.56V, the reset switch and a 12 MHz quartz generator are placed on the front panel source. Using this kind of generator is required due to way of programming the robot. To limit the number of pins needed to connect the programmer use the bootloader with the possibility of programming the robot via USB. This solution allows to connect the computer to the robot using only three pins. Figure 4 shows the front panel.

On the bottom of the robot there is board which contains motor MPC17C724 drivers made by Freescale Semiconductor. This is a circuit named double H-bridge. It controls the two engines driving the left and the right wheel. Bottom view is shown by figure 5. 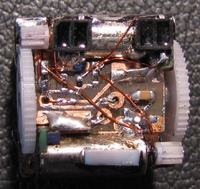 The upper plate is covered with a green soldermask and located above the cell. It contains protection of the cell (short-circuit or excessive discharge). This is the original plate purchased with the cell.

The lithium-polymer battery pack has a capacity of 50 mAh and 3.7V nominal voltage, which has been removed from PicooZ micro helicopter. A fully charged cell is enough for about 10 minutes of robot's life. The battery is located at motherboard, just behind the the front panel

The robot moves thanks to the vibration-mehcanism from Nokia-3310's. The gear has been taken out from the micro model airplane servos. Larger cogwheels are applied as robot wheels. The construction of the propulsion is shown at figure 2 and figure 5.

The Little has sensors and rangefinder line. The line is detected by two polished-up KTIR0711S sensors. It can be seen in figure 5. They are attached to the engine driving the right wheel. The adversary is detected by rangefinder's, which was described in section 2.1. Rangefinder 's range in the current configuration is about 30 mm.

The parameteres of the robot