I am pulling my hair out chasing what I thought was a battery issue but finally I found out that it wasnt. Here is my issue, I'm trying to run a blinking red 5 mm led i bought at Radioshack off of a 3 volt battery. The thing is I have got it working perfectly except for one annoying thing, and in just stumped and have no idea why. I have the blinking led soldered to a micro slide switch then wired to coin battery holder. The first time I turn it on it works fantastic, then I turn it off. Sometimes it will work again and again for a few minutes, but 100% of the time whether it is right after I turn it off, or after letting it sit in the off position for a few seconds when I switch it back on the light will not come on. Sometimes it will take about 10 or 15 seconds and then very faintly start blinking and gradually after about 10 seconds or so will flash at normal brightness, but most of the time it will just not flash at all. Then I pop the battery wait a few seconds and it will work again. I thought I just had a bad connection but after redoing it at least 10 times and my connections are perfect every time, I reLize something is just not right, maybe with the way I'm trying to do it? Why in the world will it work fine at first after installing the battery, but not after it sits until popping out the battery again???? Please help, Im embarrassed about how many hours I have in chAsing this problem, thanks guys.
H

check the battery voltage now?
lets say your led drop is about 2V. how many LED's are connected?
If your battery voltage is less than 2V, it wont work. Do you have series resistor to LED?

hemnath said:
check the battery voltage now?
lets say your led drop is about 2V. how many LED's are connected?
If your battery voltage is less than 2V, it wont work. Do you have series resistor to LED?

Thanks for your reply. Actually I know you are right, on a whim after I posted my thread I started thinking about voltage and found the package my led came in, bam, it said 5 volts :-x. So I put anothe battery in series and it worked like a champ, so my question now is do they make a 5 volt coin battery, or a 3 volt blinking led? If so can you tell me where, RadioShack doesn't have anything. Space is an issue in this design and I can only put 1 coin in there otherwise I'd wire 2 in series. I'd much rate just get smaller voltage led if possible. Also how is it a lot of people say an led that blinks will last months on a battery. All the blinking LEDs I see are 10 mah at the lowest which on a regular 200 mah coin battery would only last 20 hours right? Anyone have any ideas, can I get the voltage way down on a blinking led? I don't want to build a circuit board or anything, that is why I'm buying blinking LEDs because of my space issue. Thanks guys.

Oh and btw, no I don't have anything connected, just the led to the switch to the battery.
K

There is (or was) an IC called the 3909. It blinks an led powered from a 1.5V battery. It only needs a capacitor to be added.

This may be what you've heard about, that an led will flash for months from a single battery.

I believe it works by switching the capacitor to double the supply voltage. There are ways to do this without buying a 3909.

Similar projects can be found at this link:

kabeer02 said:
if you can upload the circuit diagram i can modified it to you
Click to expand...

Well, I'm really a newbie here at wiring things, so I don't reallly have a diagram. I can tell you I bought the blinking 5mm led from Radioshack, it blinks on its own, no circuitry or anything. It will do this if you just put the 2 wires off the led onto a button cell battery. I simply added a switch to turn it on and off, that is it, that simple.

I am having another problem though. I ran 5, 1.5 volt button batteries in series so it would have more than enough voltage for the 5 volt led and I'm still getting the same issue, I am truly stumped. It lights nice and bright the first time the batteries are installed but if you turn it off for a few seconds then back on you get the faint light that has to "spool up" again. If you let it sit a longer time, say 30 minutes or something and then turn it on, nothing, I'm sooooo frustrated, what am I doing wrong? I can take a picture or video if that would help? The strange thing is, if I run 2 3volt coin batteries in series it works fine but I don't have room for 2 of those, why are they working? 2 of the coins are 6 volts, and I have tried 4 and 5 (6volts and 7.5 volts respectively) of the smaller 1.5 volt button batteries and it won't work even thought it is the same voltage as the 2 bigger coins right? I thought electricity was logical but this is making no sense to me at all, please help!
B

I ran 5, 1.5 volt button batteries in series so it would have more than enough voltage for the 5 volt led and I'm still getting the same issue
Click to expand...

With all the tests you're doing, it's likely one of those batteries is declining (has high internal impedance). If so then it will prevent sufficient current from getting through to the led.

I was going to suggest a 'joule thief' type of step-up voltage converters. It can translate 1V from a half-good battery into several volts through a bright white led.

However as far as I can tell, it wastes 50 percent of the power while it delivers the other 50 percent to the led. This will quickly deplete a button cell.

I believe what you are looking for, is a way to extract 4 mA from a 1.5V battery for a long time, store the juice, then pump it at 25 mA into an led for a short time, lighting it for maybe a 10 percent duty cycle.

I concocted a simulation of something that might do the above. It has not yet been proven with real components. I started with a 'joule thief' schematic, then played with led placement and transformer ratios. 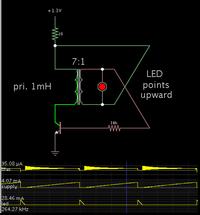 Notice the battery voltage is at 1.3V. The converter should work even lower than that.

How to wrap the windings is the question mark. The 7-to-1 ratio is not a mistake. The primary and secondary are placed correctly.