Hi, Interesting problem with an surely easy fix (I hope).

So I have breakout / riser that enables 2x PCIe x1 cards off a PCIx1 slot. Its been tested in x16 slot and is functional. The main PCB and daughter PCB (latter is what plugs into motherboard) are connected via USB 3.0. (USB 3.0 specificaiton = 8 wires inside (ignoring shield).

At the time of purchasing the riser, hereinafter named 'doubler' (image 1) I was unaware of the item in image 2 and believed it was possible to interchange the daughter board with a PCIe mini one. Only AFTER did I discover such an exchange wouldn't work, was I aware of 2nd product; which ftr has since sold out with slim chance of finding another. So I am stuck with item #1.. 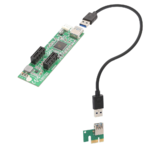 Now, I sourced a mini pcie daughter board (sold seperately) and connected it to that in image 1, with USB 3.0 cable only to find that mobo does not detect the doubler. Though the mobo does detect it when using the supplied PCIe x1 daughter board, this is not an option because the only slot for it, is curently taken.

So to troubleshoot I cut the USB 3.0 cable in half (the one in image 2), with each daughter board (a mini and a x1) on opposite ends. USB 3.0 has 8 colour coded wires inside, which simplified pin-to-wire 'map'. I used continuity function on multimeter to do this as well as info obtained from pinouts.ru website (which appears reliable). I mapped out respective wire colour to all the pins to on both boards (see below, fig A,B) once mapped, I proceeded to join the cable back together in order to
A) establish if all colours match up (where applicable, note/correct those that don't)
B) test doubler configured with mini PCIe once resoldered.

Observations:
1) All the colours match up accordingly end to end except for REFCLK +/- (green / white) which were wrong way round. I soldered them together according to pinouts.ru, the right way. In other words, white to green, green to white.
2) The x1 daughter board uses all 8 wires but PCIe mini daughter board only uses 7. Thus the Line Reactivation pin on the PCIe x1 board isn't connected as there isn't a spare (connected) pin on the mini board for it. All the other pins and respective wires match up to one another. I have triple checked everything.

So whats wrong? How can I get the doubler to work tiwh PCIe mini daughter board? Notice it is possible, as the one in Image 2, appears to use exact same daughter board, granted the main PCB does look significantly different.

I also wish to add that there is this product here which appears to adapt x1 to PCIe mini directly with no other addtional components (capacitors etc):

You probably know about installing drivers for new hardware, and looking at Device Manager to see if any device causes an alert.

Several connectors, brass tabs sliding against brass plates, etc. At times I had to clean newly purchased connectors because of tarnish. A pencil eraser is often recommended. Or an emery board. Steel wool is ideal although risky because slivers might drop on your circuit board and conduct current where it ought not.

Connectors mounted directly to circuit boards. Stress can lead to hairline fractures in the copper tracks. Use a magnifying glass to examine for breaks.
G

I get your point but I'm confident its related to pinout mismatch.
The red wire, connected to 'Link Reactivation' on the x1 daughter board does not have an eqiuvalent on the PCIe-mini board. It is the only orphaned conection.
The green and white wires had to be swapped ( REFCLK +/- resp. according with pinouts.ru website).As I say, I have also tried in 100% default config (before I cut cable) and it did not work either. 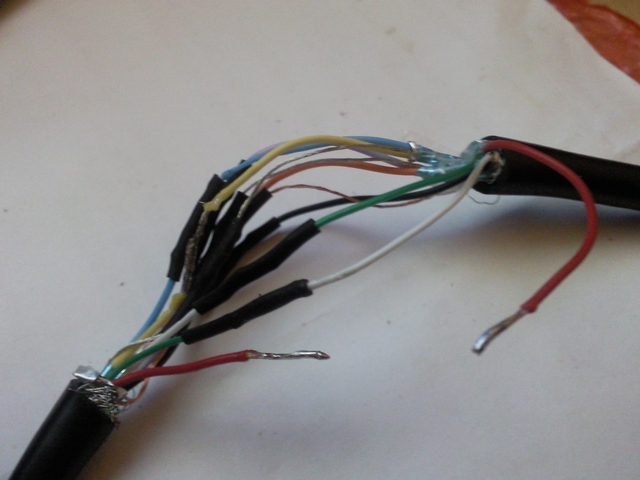 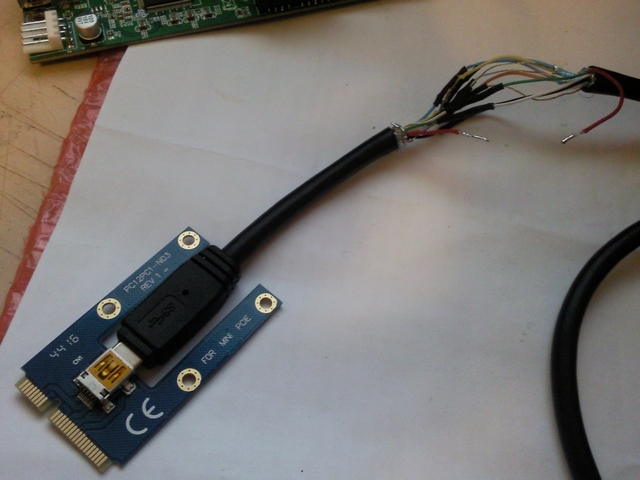 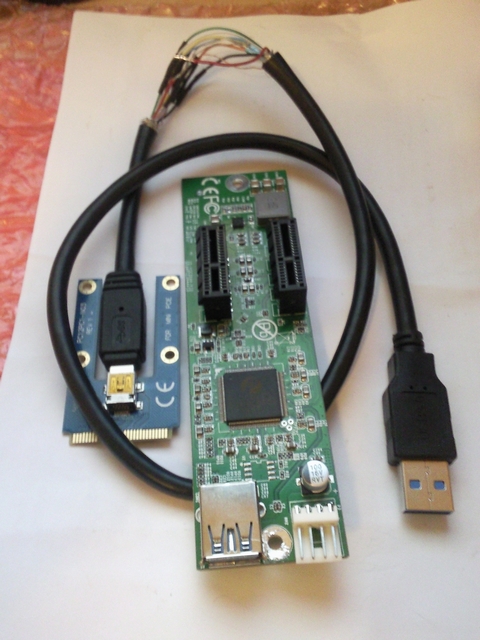 IF anyone with inclined in PCI Express connections can reccomend a more appopriate forum or indeed 'the' solution please let me know via PM or otherwie thanks
Last edited: Mar 31, 2020
B

Since 'Link reactivation' stands out...
Could it have to do with either:
performing startup process again,
or
to restore recognition of a device/ board/ module?

What is the normal volt level at Link reactivation?
Suppose you experiment with puling its volt level low (or high) momentarily ?

Does it need to be done prior (or after) the other device/ board/ module?
Etc.

Did he make a version 3 yet? There are hints he has trouble maintaining quality control. Isn't it very fishy if you had to correct the position of the green & white wires?
G

Hi
Thanks for reply
I will get back to you with necessary info re: status of red wire upon boot.
G

Disregard previous message.
To clarify, contrary to that indicated in the opening post, the product in the second image is now back in stock.
Delivery took a little longer due to the virus thing. Upon reciept of it, I plugged it in and it didnt work either, I got very angry, but then a miracle happened.
I interchanged the stock power cable supplied (which drew power from SATA connector) with one I had spare (which draws power from MOLEX connector).
The wiring of both cables are identical so its complete mystery why such a change enables ithe product to work.

I was never able to try to figure out why the IOCrest (product #1) product doesn't work (nor have the patience to probe it, in all honesty).

Glad at least SOMETHING works.

Really positive news. Huge change from your previous (erased) post, huh? That's how it is with these newfangled computerized devices... They act in cryptic ways, and sometimes even perform a miracle.
H

Giro said:
I interchanged the stock power cable supplied (which drew power from SATA connector) with one I had spare (which draws power from MOLEX connector).
The wiring of both cables are identical so its complete mystery why such a change enables ithe product to work.
Click to expand...

E
Would anyone happen to have a start board for MINI PCI III?

how to create green masking in pcb?

P
[SOLVED] What are the files required to the PCB manufacturer