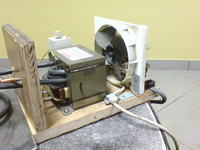 Transformer and ventilator used for building this device were taken from an old German microwave. The ventilator's aim is to cool the windings. The secondary welding was removed from the transformer. It is important not to affect the primary winding. Next step was adding the secondary winding of own production, which was made of cable fi 8mm in lagging of about 10. Transformer was then screwed to plywood, behind it the ventilator was screwed. In front of the transformer, plywood with two holes was mounted. Both ends of the secondary winding were dragged through the holes. The plywood makes a shield which stops cold air far away from the place of welding. Next to the transformer, like it is shown in the picture, there is a time switch with adjustable power off time.
The transformer can be switched on with use of a foot – then two hands are free to work with electrodes. The pedal was taken from a sewing machine. With a simple connector instead a wire, the pedal works well in this welding machine.
The electrodes were made of copper wire fi 8mm, part threaded. Bracket for the cable was made of cut copper heating cube. Rods bend themselves while tightening the nuts, but it is not problematic.

Work
The ventilator works immediately after inserting the plug into the socket (because the transformer strongly heats up). Two plates are set on each other in order to weld. Two electrodes are set in opposite. When the pedal is pressed, the voltage is enclosed at the time switch, which gives it further for a specific period of the transformer. Then the tension is cut off and the transformer isn't alive, despite the fact that the pedal is still pressed. Of course the pedal can be released in any time. The time switch is mounted only to prevent accidental prolonged pedal pressing or unwanted button blocking.
Cross section of the secondary winding and the number of coils was selected experimentally.
When used with 230V power supply, the device doesn't result in stamping out the fuses (even 10A) or cause 'waning light' at the time of starting.
While handing the electrodes, there is no current tickling feeling, but it is better to use safety gloves, because the electrodes heat up much.
There are some pictures: 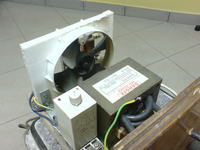 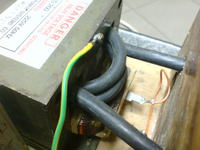 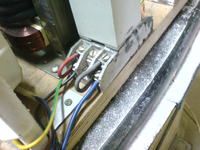 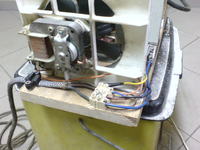 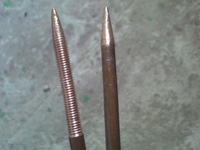 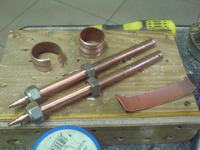 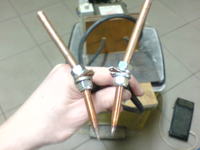 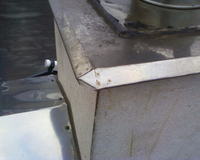 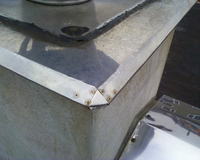 Link to original thread – Zgrzewarka do blach by smith. DIY