Does anyone with deep enough knowledge of, and long-running experience of using, the TL431A or even TL431C versions (TO-92) consider that this circuit adaptation idea to reduce dVref/dT across a wider temperature range than 0ºC to 60ºC (here 100ºC was chosen) is plausible and potentially effective as a temperature-compensation method?

And, therefore, credible and feasible in the real world on a PCB that is conscientiously laid out? I'm talking of a single board and selecting components (and with post-soldering trimming of R1, R3, R4, R5, as needed) not mass production. Bonding TL431 T0-92 case (bent leads) to NSS40300 SOIC case with that grey gunk seems very feasible in order to more or less match Tamb experience of both parts.

Do the simulation results seem sufficiently realistic or are they overly-idealistic?

I know TL431 drifts some 40mV to 60mV across its temperature range of use with a stable supply. Iref goes from 2uA to 4uA.
Resistors are 100ppm and making them 10ppm didn't alter the results at all. VF1a has somewhat nasty and 'slow' start-up behaviour... Also, the rise in Vref to ~3.3V seems irrelevant if 2.5Vref is not a vital 'must have'. I also see that from 0ºC to 60ºC such an addition would be completely unnecessary as the TL431 only theoretically changes by some 3mV across that range.

Previous attempts included e.g. subtracting or adding a temperature-dependent current to pin 3 (adjust) and that made no improvement at all. This version alleges it could. 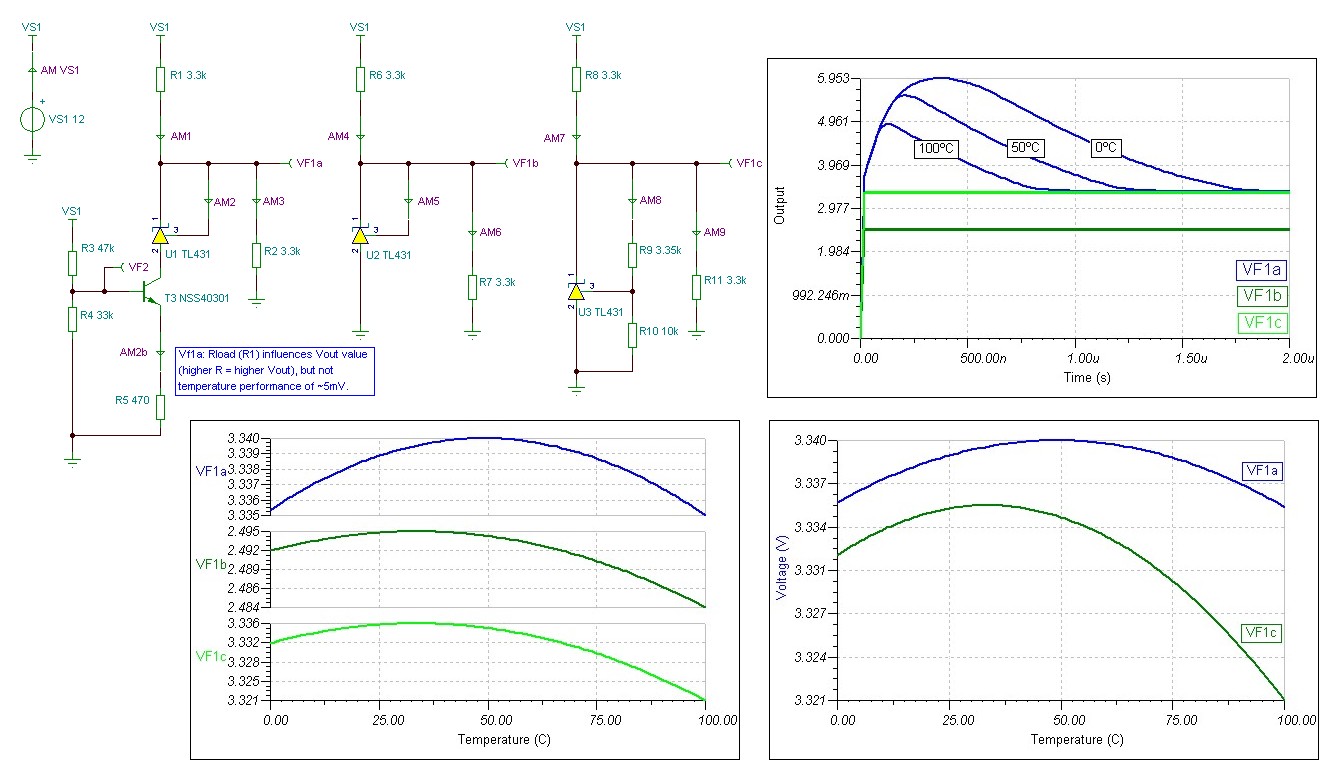 Sort by date Sort by votes

Tl431 is a simple Widlar bandgap combined with opamp ×2 configuration, so it has parabolic temperature dependence with 2.5V output.
Datasheet is showing ca 15mVpp drift across 0-100°C.
If you want to further compensate temperature drift, I would suggest to add small resistor (let's say 10-100Ohms between anode (pin 2) and ground and play with it temp-co.
I do not know whether it is proper way to do it with Tl431, however it is one approach of 2nd order curvature compensation in Brokaw bandgap and maybe will work here as well?
Upvote 0 Downvote

Is it working? Can you share some simulations?
Upvote 0 Downvote

I haven't tried yet. I am drowning in the genuine pleasures of 1uA x 1uF = 1V @ 1s from 0 to 60°C, i.e. basically a pulse, Isource, integrator, ADC... Aiming for 1% error in theory and sims, so as to realistically expect at least +-5% error in a pcb version. Am bogged down cleaning up signals (or attempting to), re-reading about op amp error sources info and noise floors, etc. but gather resistor and op amp noise will contribute trivial/negligible error compared to rest of expectable component non-ideality, V, T, skill-level of designer, etc. errors in my hands. TL431 tampering-with/temperature compensation used is sort of low on list of pressing concerns to correct or clean up so haven't tried yet. Only got an OA whose signal I hadn't looked at closely to rise with no ringing at the correct 2.5 Vout again yesterday evening as adding feedback cap (Cdiff + Ccm + Cstray) altered Vref_out by 167mV, couldn't work out why 167mV but got rid of it by trial and error... Am a bit overwhelmed with so many angles must understand about circuit stages in order to maximize hoped-for quality. AAAaaargh!

As you asked, I will certainly give your suggestion a sim over the next few days and post TINA results here. Hope you're not offended I haven't tried yet, it must be obvious from above that my circuit is quite complex for me, but I also want to use it to review concepts I half-understood a few years ago and hope to assimilate those concepts better now, you know..., op amps are a whole world, and electronics, all-consuming as need to consider so many things at once, learn new stuff to solve problems, and the numbers must add up or forget doing the pcb version, love it...
Upvote 0 Downvote

d123 said:
Hope you're not offended I haven't tried yet
Click to expand...

Of course not, I am simply curious ;-)
Upvote 0 Downvote

I would have thought that the more current there is out of the TL431, the greater the voltage on the anode resistor, so it would push Vref upwards by the same amount, and the higher Vref seems to the FB pin, the lower it would pull Vref to bring it back to what FB is expecting. You would think that as Vref droops with rising temperature, it would be of interest to subtract equivalent mV from FB pin to create a linear response across temperature, rather than parabolic. I couldn't get anything like that to work in previous attempts, if it can work at all as the simulation shows iFB is always 2.08uA down to 2.07uA...

So, if the BJT version produced comparable results in the real world, it would only be of use if Tamb is really expected to range from 0ºC to 100ºC. So it's more about knowing the temperature range of operation, and if that will be 0ºC to 60ºC it's of no benefit adding the 'Christmas Tree decorations', especially if the large tsunami at start-up is going to be problematic downstream.

It has been an interesting experiment to compare both methods and thank you very much for your suggestion. Below are simulation results. 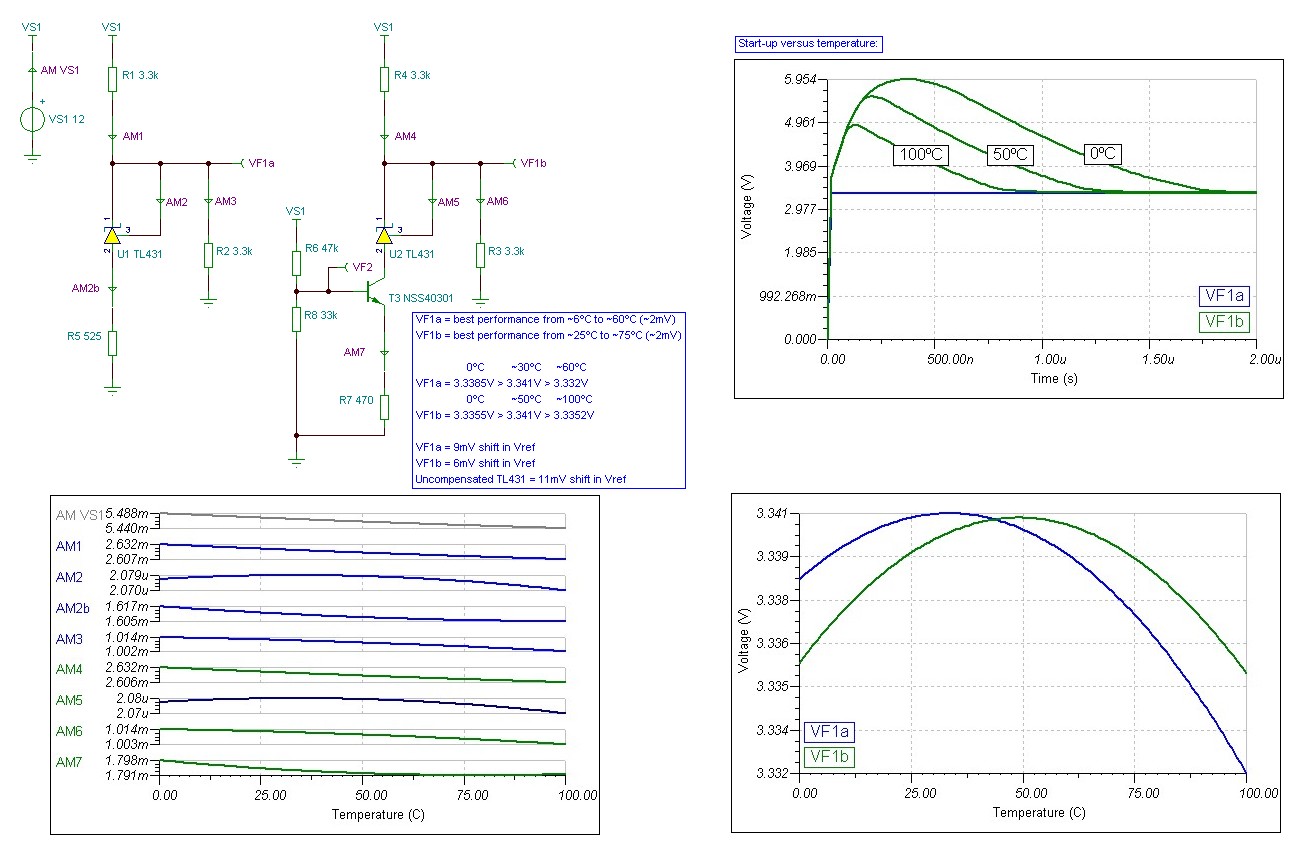 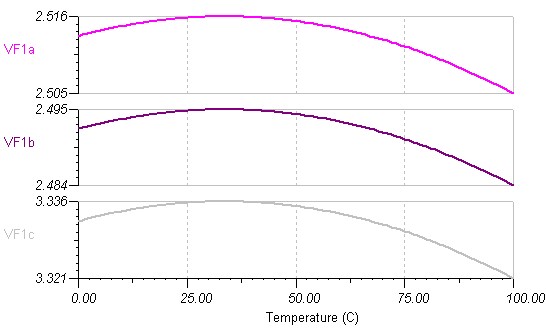 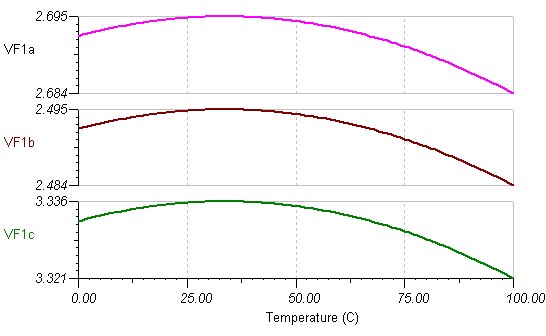 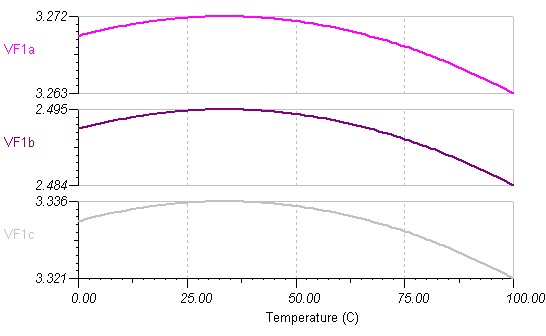 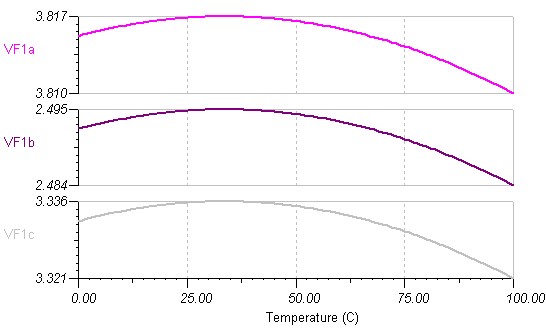 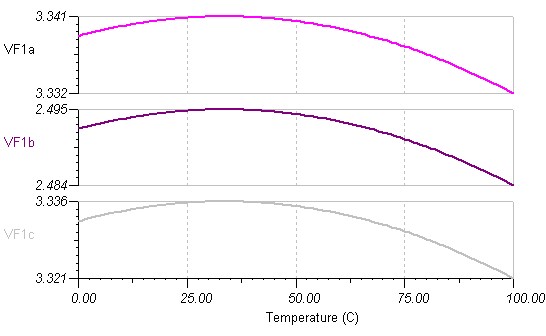