I'm building a board to control a three-phase PMSM motor. I believe I have most of the control code implemented and working, except that my SVPWM algorithm generates a DC offset of 8v. I'm not sure what causes this and would like to eliminate it. As a comparison, I also implemented a straight PWM implementation that generates sine waves based on a lookup table, and looking at its output on an oscilloscope, the three sine waves are 120 degrees out of phase (as expected) and go down to 0v and up to close to the DC rail voltage. The signals generated by my SVPWM implementation look like textbook examples of SVPWM when I look at them on a scope (see attached scope shot), except that the center of the signals sit right at 8v. If I increase of decrease or decrease Iq, the span of the waves increases or decreases, but it's always centered on 8v. I'm not sure why this is--I'm not an expert on control theory or motor control--and I assume I need to get rid of this offset.

My SVPWM code is below. Input parameters are:

The thing I'm most unsure about here is the calculation of the modulation index, which is used later to scale the PWM on times. Is my calculation of it correct?

Note: This code isn't optimized yet. 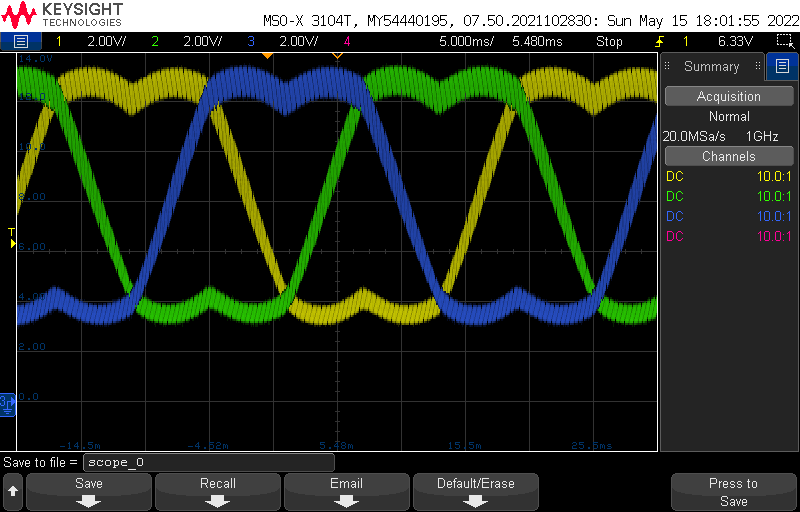 Here's how I'm measuring the SVPWM waveforms with a scope in my original post. I've disconnected the motor from the control board and substituted the simple test fixture shown in the diagram below and have the scope probes connected to the test points indicated. 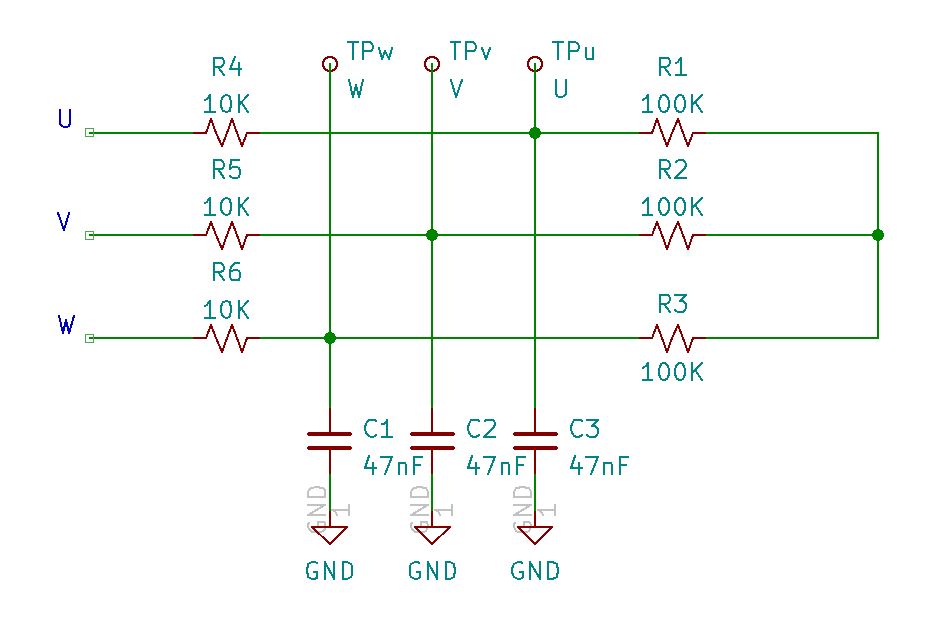 maybe the DC offset is caused by the hardware.
The wavefrom looks good, so far.

But indeed: as long as all three outputs have the same DC offset it won´t harm the motor. It won´t be able to see the offset.

I don´t know where exactly you measured the signal, nor do I know the true amplitude. A schematic or at least a sketch would be helpful.

Hi Klaus. Thanks for adding the code tags. I'll remember to use them the next time I post code.

The scope capture I posted was measured using a test fixture shown in the second photo in my post and the amplitudes can be read in the scope shot (all three phases are referenced to the same ground point on the scope). The scope's ground leads were connected to the same ground the capacitors in the diagram are connected, so I'm measuring phase voltages rather than line-to-line or line-to-neutral voltages.

Unfortunately, the DC offset does seem to have some negative effect as when I replace the test fixture with a motor, the motor doesn't spin. In an earlier version of the code, I generated sine waves directly using a sine lookup table to generate three sine waves at 0 degrees, +120 degrees, and -120 degrees. With this arrangement, the motor spins very smoothly, quietly, and coolly. Looking at the output on the scope, I don't see any DC offset at all. Using SVPWM, not only doesn't the motor spin, it also draws a lot more current and gets quite warm.

Another issue with the DC offset is that it doesn't allow using the full range of DC voltage.
Upvote 0 Downvote

I presume you have half bridge drivers with DC-=0 and DC+=12V. Respectively the DC bias should be 6 V. You have apparently 8 V DC bias, thus an unwanted DC offset of 2 V. Things would be clearer if you show phase voltage U, V or W relative to DC- (GND).

You also don't show the motor wiring. We expect that it has three phase lines and no external star point connection.

Do you apply a frequency/voltage ramp when starting the motor? Otherwise it will probably not run.
Upvote 0 Downvote

again: the DC offset won´t harm motor function. If the motor does not spin, then this is a different error.
again: I still miss informations that simply can be shown with a sketch.
For example: are we talking about 8V on a 12V rail or 8V on a 600V rail ...

FvM said:
I presume you have half bridge drivers with DC-=0 and DC+=12V. Respectively the DC bias should be 6 V. You have apparently 8 V DC bias, thus an unwanted DC offset of 2 V. Things would be clearer if you show phase voltage U, V or W relative to DC- (GND).

You also don't show the motor wiring. We expect that it has three phase lines and no external star point connection.

Do you apply a frequency/voltage ramp when starting the motor? Otherwise it will probably not run.
Click to expand...

The scope shot I posted shows the phase voltages U, V, and W relative to DC- (GND). What I'm having a hard time understanding is why the sine waves generated by SVPWM are offset by 8v. When I generate sine wave directly (e.g. not using SVPWM, but using lookup takes to generate sine waves independently for each motor phase, but 120 degrees out of phase with each other) there is no offset -- the bottom of the sine waves sit right at 0v. 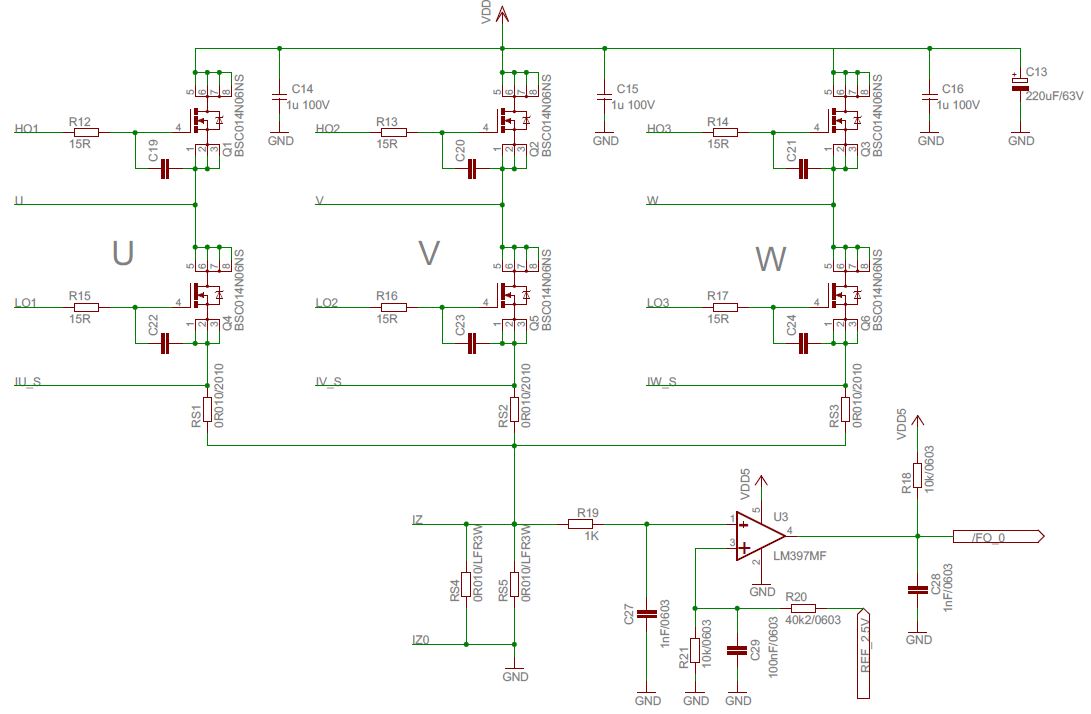 The MOSFETs are driven by gate drivers, which in turn are driven directly by the PWM outputs of a microcontroller.

again: the DC offset won´t harm motor function. If the motor does not spin, then this is a different error.
again: I still miss informations that simply can be shown with a sketch.
For example: are we talking about 8V on a 12V rail or 8V on a 600V rail ...

What are R19..R14 for. I´d rather expect a 10k resistor...Usually you want to reduce capacitance at this node than to add some.

Here are two scope shots showing what the waveforms look like when I generate sine waves using a lookup table rather than using SVPWM. As can been seen, the waveforms extend down to nearly 0V. The first is for a high value of Iq and the second is for a lower value. 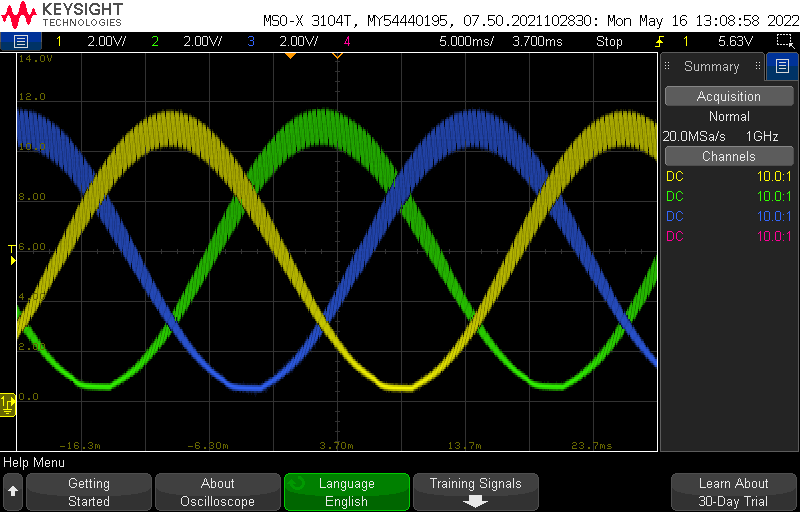 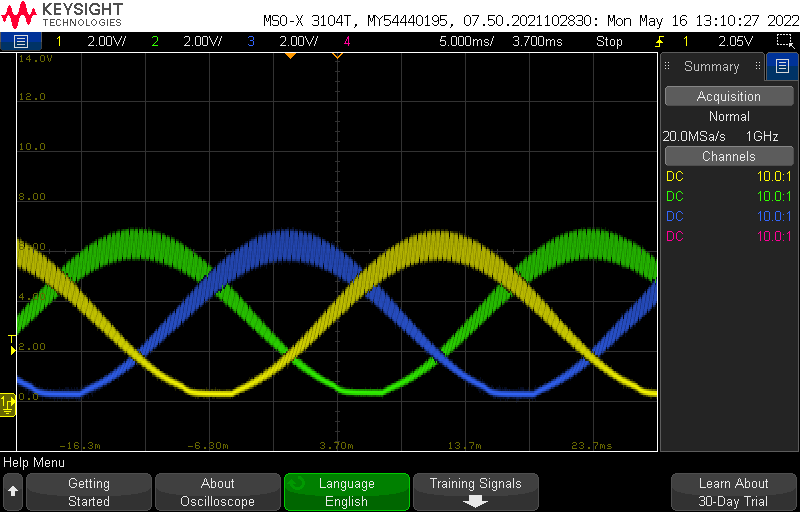 For the SVPWM case, if I decrease Iq, the peak-to-peak spread of the waveforms decreases, but they stay centered at an 8V DC offset. 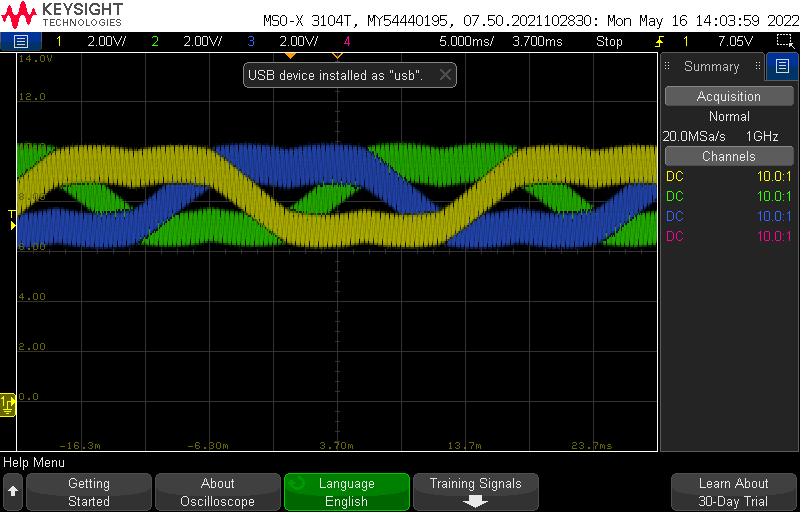 so I´d begin with what`s the difference in code between sine and the modfiied sine?

you said that with sin you used a table.
But here I see no table. Why do you do it differently here?

Honestly I don´t understand all your calculations. ... how you calculate the amplitude (in PWM values) and how the offset.

I solved the problem that was preventing the motor from starting to run. Here's the story...

The motor I'm working with has an incremental quadrature encoder. When I was working on the non-SVPWM implementation I wrote code that established the initial electrical position of the rotor by energizing the high-side U phase MOSFET and the V low-side MOSFET, waited until the rotor stopped moving, and then zeroed the position counter. That worked fine when starting the motor with the non-SVPWM implementation (which generates three sine waves via table lookup) in either the clockwise or anti-clockwise directions, but it didn't work with the SVPWM implementation (the rotor moved slightly and then stopped).

Jerryxm said:
I'm assuming this is due to either the 8V DC offset the SVPWM implementation generates or perhaps the rotor Iq axis isn't exactly 90 degrees ahead or behind the Id axis.
Click to expand...

I presume the latter. Bias voltage should have no effect on power consumption. For maximal undistorted output voltage, it would be however DC/2, 6V rather than 8V.
Upvote 0 Downvote
J

FvM said:
I presume the latter.
Click to expand...

I think you're probably correct.

What is the best way to establish the initial electrical rotor position on a motor with an incremental quadrature encoder? There's no absolute position reference, so finding the position of the poles of the rotor needs to be done when initializing the controller. I'm not sure the way that I'm doing it now is correct, or if yields a result anywhere near where the rotor magnetic poles really are.

Some help here would be appreciated.
Upvote 0 Downvote
E

Presumably if you measure the outputs with respect to half rail - the offset will be less - do you set where this is going ... ?
Upvote 0 Downvote