I have a faulty ultrasonic cleaner which I opened and attempted to study its circuit. The fuse, 1N4007 diode, and both transistors (BUX84) were blown. I attempted to replace the faulty parts and they blew again upon switching on. This drove me to wanting to understand the machine further and I hope I can learn from all of you.

I attempted to draw its schematics using LTSpice based on the PCB traces and hope that the simulation can help me understand the circuit better (see attached).

Some notes about the circuit:
1. The schematics is very much similar to this one --> http://jumperone.com/2012/02/ultrasonic-cleaner-re/, except that my machine does not have timer board nor displays. And instead of BU406, my machine is using BUX84. Furthermore, I can't find the model for BUX84 so I used BUX85 instead in the schematics.

2. The circuit uses a toroid core with 3 wires wound in parallel (trifilar winding ?) with different number of turns (see attached photo). As for the transformer, it looks like a barrel with two isolated windings (primary at the lower part and secondary at the upper part). There is a threaded (ferrite?) core at the top part of the transformer and the core is glued to prevent movement of the core. I noticed that the inductance of the secondary winding changes when the core is turned. The transformer is labeled with "p:240 / s:330", which I suppose the label refers to the number of windings and a step-up transformer. Is there a name of such transformer ? 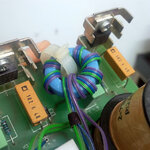 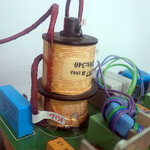 4. The transducer looks like piezoelectric transducer as I noticed a layer of insulation (dielectric material ?) in between the transducer terminals. I read in the internet that one can measure its capacitance, so I measured it to be around 1nF.

Observations in LTSpice :
1. When I simulate the circuit, the voltage at L5 (secondary winding) showed very very low voltage (in the range of nV). After researching extensively about LTSpice, it seems to be lack of ground in the circuit. The driver circuit looks similar to a totem-pole push-pull output circuit in which the emitter of the lower transistor is connected to ground. Similarly, the load at the output is also conected to ground. So I connect L4 and R11 to ground. I re-run the simulation and the voltage at L5 showed a stepped-up voltage from the input voltage. However, on the PCB, I can't see any traces connecting L4 and R11 to ground respectively. Any explanations on this ?

2. From the simulation, the collector current (Ic) swing beyond the maximum rating of the BUX84 (-10A to +4A), which does not make sense at all. The machine is rated 230V/0.5A only. Any explanation on this would be much appreciated.

3. Regarding the toroid with 3 wire windings, I use the K statement to couple the windings with k=1. Is this a correct / safe assumption for the simulation?

4. Regarding the transformer inductance, the relationship between the inductance is not according the ratio of the square of the windings, which means there is leakage inductance. I calculated the mutual inductance using the formula M = [L(total) - Lp - Ls]/2 and subsequently calculated the k = M/sqrt(Lp x Ls). With the values of the Lp and Ls, the k value is approx. 0.375. Plugging the k value into LTSpice, I got a step-down transformer effect instead. Is there anything wrong in my approach ?

Regarding troubleshooting the machine fault :
1. What would be the likely culprit of the huge current draw which caused the diode, the transistors, and the fuses to blow ?
2. I checked the winding resistance of the inductors and transformer and they are all in the range of 1-2 ohms, which corresponds to the resistance of the entire length of the wires.
3. All the other diodes and resistors checked out OK. For the caps, I only verified the capacitance values.

Thank you for reading and I appreciate any constructive comments / feedback on this.

The base transformer should output opposite polarity for high- and low-side transistor.
J

FvM said:
The base transformer should output opposite polarity for high- and low-side transistor.
Click to expand...

I don't quite understand on the phrase "base transformer" --- are you referring to the step-up transformer ? If so, how can it output opposite polarity for the transistors ?

On further thoughts, I think I know what you mean by "base transformer". Upon closer look at the circuit, I may have made a mistake with the placement of one of the toroid winding. I changed the phase of the inductor in the high-side and simulation showed more desirable result (i.e. result within expected operating parameters).

I reattached the corrected version of the schematics. Thanks for the hint -- it is very helpful in my understanding.

On the machine fault, do you have any view on the possible causes of the blown fuses, diode and transistors ?

Hi,
what model/Mfg is your cleaner?
I have a similar problem with one I just purchased (but non-functional).
I made a youTube of it. https://www.youtube.com/watch?v=wyJFc7CaTDE

if you get any replies to your questions, please let me know, maybe those will help me fix mine.

I corrected your schematic.

I wonder lack of diodes D1 and D5. Any break in the feedback circuit will result in burnout of the diode D2 and the transistors Q3 and Q4. Check feedback and D3, D4, R4, R5, C4, C5. Connect serial your device and 20-40W light bulb. Check oscillation by oscilloscope.