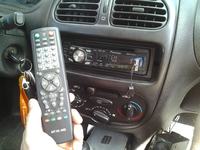 This is an idea how to create and use control over a car radio with use of a remote control. To make this device, you will need the IR remote control which is compatible with RC5, soldering iron and a programmer. It can be done in only a few hours.

Presented here radio-cassette player controller uses wireless IR remote control. If you want, you can write a program in C that supports for example a smaller remote which uses another encoding than RC5.

The whole device is really simple and it consists of voltage stabilizer 7805, microcontroller Attiny2313 from Atmel, 10 transistors BC547 and some resistors.

Control is implemented via connecting a cable with mini-jack to the back of the radio-cassette player, and attaching resistors of the proper value to the wires. Every function should have another resistance. In this construction, attaching of the resistor is made by a corresponding transistor. Each of them is connected by the base through a resistor to the pin of microcontroller. This microcontroller, in turn, after decoding and interpreting the RC5 signal form the remote, sets a logic “1” for 30ms and thus the control takes place.

Listing of the code written in Bascom can be found in the attachment to the original thread. 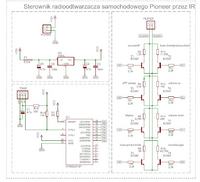 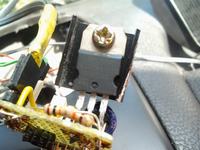 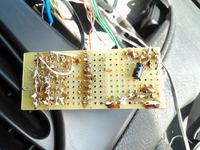 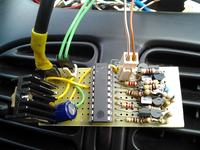 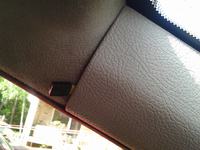