Electronics Quiz... Concerned with how accurately things were marked

I am writing on this forum because I'm extremely troubled... I recently had a quiz in my "Project Lab" for which I just received my results.

...The entire course revolved around building a variable power supply. There was no theory class to support the lab.

...Before receiving the marked test back, I had learned that half our class (it's broken up into two sections because of size) was allowed to use the internet/google as a resource! The first half of the class which I was in was only allowed to use our notes. ...I was quite frustrated by this and brought my concerns to the teacher... to which he responded "their test was harder".... My response was "I guess we'll see when we get our results back, won't we".... Because I did not feel comfortable with my answers at all after writing it, and I believe that half the class had an unfair advantage, no matter how much harder their test was.... With a resource like Google and the internet you can do quite a lot in 2 hours! ...while our only resources were what we brought to class with us.

....Enough students complained... The teacher told us today that there was a 2% higher average for the part of the class which was allowed to use Google to find answers on the test, so that 2% was added to the first half of the classes total marks.

Well... I received my test back today, and am extremely disappointed with the results.... I have attached a copy of the entire test for people to review... I am actually quite concerned that some of the questions were WAY too vague, and in some cases marked incorrectly.

Here is the Quiz (which is actually worth 15% of our course mark!) ....it's horribly written but it looks like my final mark was 9/17 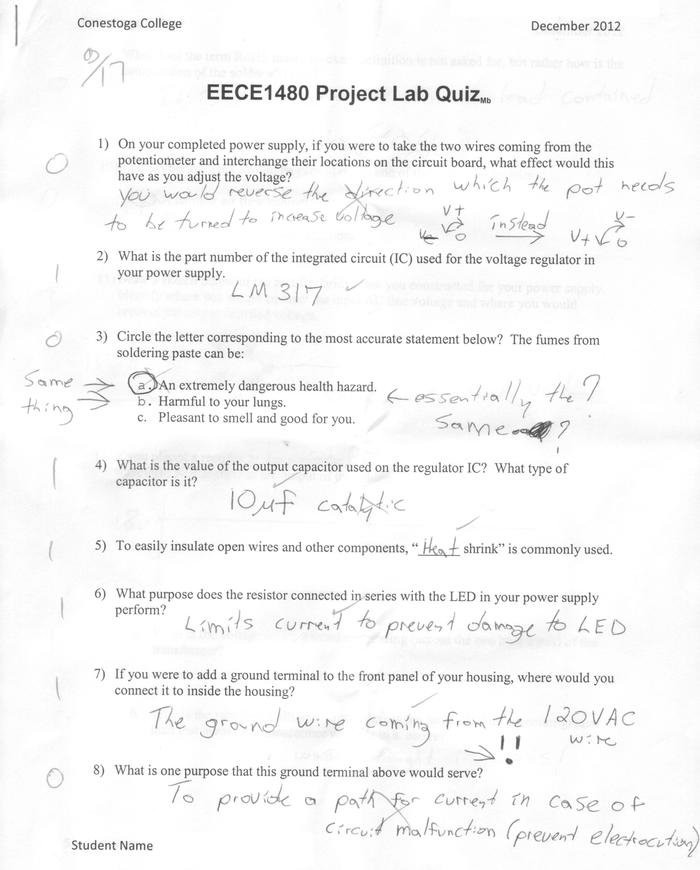 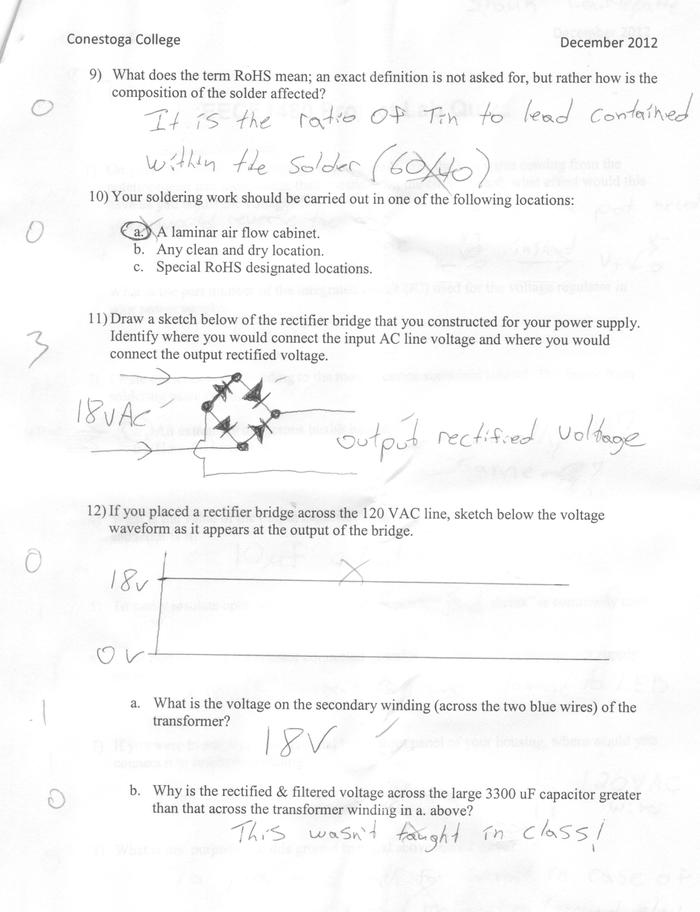 I realize that I made some legitimate errors... However without a resource like the INTERNET it was the best I could do.... And I do have some concerns with the questions and the way that they were marked, and would like a second opinion (or many).

Question 1.... If you reverse the leads on a potentiometer (the one that controls voltage on the variable power supply) ...you would change the direction in which it needs to be turned to increase or decrease voltage.... Am I not correct?... can anyone see why I got that wrong?!

Question 3.... This question pertains to Soldering paste. It asks to circle the most correct answer. (which A and B are very similar) .... My reasoning for picking "A" was because I have the understanding that the danger with solder is the cumulative effect of lead in the human body... (which is much more serious than temporary harm to your lungs) ...here is an example of Solder Paste MSDS proving my point http://www.frymetals.com/pdf_uploads/rma0933hdsolderpaste.PDF

Question 8.... It simply asks to state ONE purpose of the ground terminal in a power supply...(as described in question 7) .... HOW is my answer incorrect?!

...the rest of the questions/errors are probably legitimate... Although questionable as to whether it was ever taught in class... I do have a particular issue with Question 12) b. ....HOW does a capacitor INCREASE voltage in a circuit!? WHY would the voltage ever be greater than it's input!?

Q1 is tricky. "THE two wires" implies there are only 2 wires going to a potentiometer. It that case it doesn't matter if you switch the wires on the circuit board.

Q3 doesn't say the paste is being heated. I don't mind the smell of soldering paste. So I don't know what the correct answer is.

Q8. I believe it's best to isolate your low voltage power supply from all mains wiring.

Q12. Here is a screenshot of 120 VAC going through a full wave diode bridge: 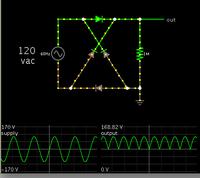 This only works if the diodes are rated to handle it. It's not clear why this question was included.

Q12b. The 18V sine wave rises to 24.4V at its peak. The capacitor charges to this level (minus voltage drops through the diodes). 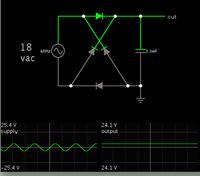 And yes, I think you would have gotten more than 2% improvement if you had been allowed to have internet access while taking the test.
G

Q1: I agree with your answer, assuming there's only 2 wires going from the pot to the PCB.

Q3: Who knows. These days everything from aluminium cooking pots to fluorescent lighting is supposed to be bad for you, so probably solder fumes are too. Isn't this a bit of a trick question though? Doesn't the answer depend on the type of solder? e.g. lead based solder is more harmful than lead-free.

Q4: Looks like you wrote "catalytic" instead of "electrolytic".

Q8: Your answer looks at least 1/2 right - it is for safety, to prevent electrocution. The danger would be from 120V AC getting connected to the front panel. That's more likely to be caused by a loose wire than a circuit malfunction though.

Q10: Probably B, but I'd want good ventilation too.

Quarta said:
I am writing on this forum because I'm extremely troubled...

There was no theory class to support the lab.
Click to expand...

Yes, anyone would be troubled. For a start, I find it incredible that no theory class preceded the laboratory work.

It seems to me that whoever marked your paper knew rather less about his subject than he thought he did and is a liability to the college.

The college has the ultimate responsibility to its students and I think that you and any other students who have concerns about this matter should take them to the board of govenors.
Q

Thank you all for your responses/help/direction... A lot of what was said makes sense.

As I mentioned previously NONE of this was covered in class... and I'm sure I would have done much better if I had access to the same resources as I do now... and as the second half of the class did... (the internet)

To be completely honest we learned more from the graduate who substituted for 2 weeks while the professor was away than the entire rest of the semester.

I'll be taking my concerns to the program coordinator of my college.
B

Quarta said:
I'll be taking my concerns to the program coordinator of my college.
Click to expand...

You'll have more influence if other students join you. Did any others voice an objection?

Have in mind what you want. Do you wish to retake the test?
Do you wish to have a different professor?
Can you be certain you'll get a better one?
Do you (or others) have grounds to get action taken against the professor?
Etc.
C

The essence of learning is to commit facts into your memory, just repeating Google found facts into an examination is no good at all. You would be very upset if during a Hospital operation the Surgeon had to refer to Google before he could finish your operation. :-(
Frank
Q

I believe the reason why google was allowed at all was because none of the material had actually been covered, and he was receiving many complaints after our class completed the test....

...The professor allowed google for the second half of the class because he realized he never actually taught us any of the things that were being tested....

I have a 97% average in DC Theory which is a much harder course (and wasn't allowed to use google during the exam)... however the teacher actually taught in the class.


...I totally agree with you otherwise