Easy WiFi scanning and connecting using MicroPython on the RTL8722

Microcontrollers are known for its low power usage and limited resources thus often deemed unable to understand Python script as Python need interpretor to translate script into machine langauge and intepretor are usaully quite resource-consuming. However, MicroPython has arisen as a lean and efficiant Python 3 interpretor that can be run on ARM Cortex-M series microcontrollers.

Ameba RTL8722 is an ARM Cortex-M33 microcontroller that has dual-band WiFi and BLE 5.0, other than that it is fully capable of running MicroPython and controls WiFi using Python script. In addition, its requirement for developing platform is also quite minimal-- only needs a serial port terminal like Tera term. Here is an example of RTL8722 controlling WiFi using just a few lines of Python code on Tera Term,

Right after the last line, you will be able to see the result printed on the Tera term almost immediately, 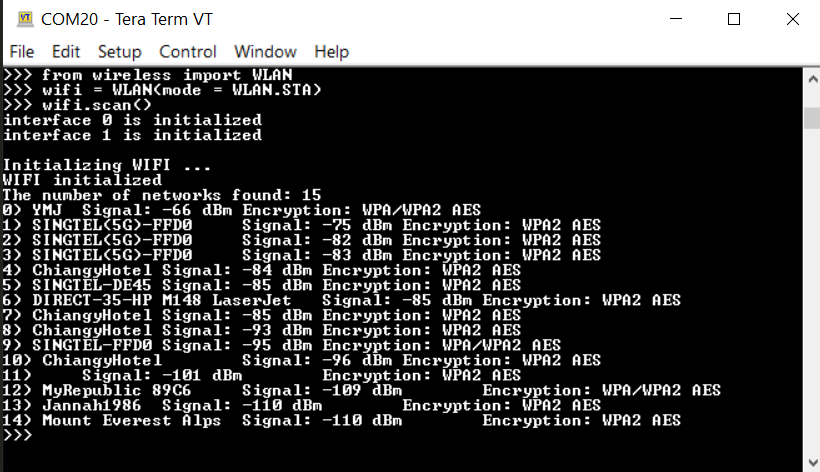 More details on getting started with MicroPython on the RTL8722DM can be found at:
Ameba MicroPython: Getting Started with RTL8722 – Realtek IoT/Wi-Fi MCU Solutions

Purchase links for the various Realtek development boards can be found at:
Buy Ameba Boards – Realtek IoT/Wi-Fi MCU Solutions
You must log in or register to reply here.