I want to know the exact and fine line diffrences between a bandpass filter and a practical differentiator. Are both analogous?
Sort by date Sort by votes
E

No. - they are not analogs of each other, a differentiator is essentially a high pass filter, a band pass filter is a high pass followed by a low pass.
Upvote 0 Downvote
C

They are OPAMP circuits ... thus they are analogous.
(Me thinking: What is the opposite? A digital differentiator? With one input? What's the expected function?)

A true "differentiator" has
* zero gain at zero frequency
* low gain at low frequency
* high gain at high frequency
* infinite gain at infinite frequency
But infinite gain is impossible in reality. Thus there are limits. Here the limiting part is the OPAMP.
It has limited open loop gain. So if you build the "simple differentiator circuit" your circuit behaviour depends on Opamp parameters which may vary device by device.
Additionally ... going to the Opamp limits you may get additional artefacts like
* internal saturation (out of regulation)
* increased time to get back to regulated operation
* phase reversal
Thus one tries to avoid the situation by external components.

Noise: is wide bandwidth, unknown frequency, random...
Thus - if differentiated - you get amplified noise at high frequencies. The output is not "clean".
The "practical differentiator" circuit improves the behaviour by filtering out unwanted frequencies.

But ... with this modifications it is no "true ideal differentiator" anymore. It takes care about the physical limitations.
It focusses the differentiator on the frequency range of interest.
It is how it is: more practical.

but if we look at the bode plot, it looks similar to BPF , the difference is that BW of a differentiator is limited compared to BPF.
Upvote 0 Downvote

I agreee there isn`t a huge difference.

The difference is that you may design a bandpass with cut off frequency far from the Opamp´s limits.

You are free to choose the circuit you like.
If you don´t care about OPAMP´s limits and noise then just use the "bare differentiator".

I am a bit surprised that the term "stability" was not mentioned up to now.
The problem with the "idealized" differentiator (sRfC) is that at zero loop gain the phase is very close (or even beyond) the 180deg limit.
This is, of course, caused by the opamps frequency-dependent open-loop gain Ao .
Therefore the desired slope of +20dB/dec (and, hence, the differentiating property) must be reduced at a suitable upper frequency.
For this reason, a resistor Ro is added in series to the capacitor which flattens out the gain increase.

Yes - the Bode plot for such a "real" differentiator and a 2nd-order bandpass looks similar - however, nobody will use the diff. circuit for bandpass filtering.
Upvote 0 Downvote
D

Convinced. Could anybody tell me why non inverting differentiators are not so common? Could not find them on the web.
Upvote 0 Downvote

curious_mind said:
Convinced. Could anybody tell me why non inverting differentiators are not so common? Could not find them on the web.
Click to expand...

Very often, differentiators are used in control systems (e.g. part of PID or PD controllers), which need negative feedback for DC.
Hence, at least one single phase inversion (or 3, 5...) is required.

From the circuit design aspect, we need (for stability reasons) negative DC feedback for the simple diff. block. This is, of course, accomplished using resistive feedback to the inverting opamp terminal.
(Remember the classic Miller integrator, which also needs resistive fedback for operational point stability).
In case you want a non-inverting diff. block there are two solutions:
1.) Use a simple unity-gain inverter in series with the inverting diff. circuit,
2.) Use a unity-gain inverter in the feedback loop (in series withe feedback resistor) and connect the feedback path to the non-inv. opamp terminal (ground the inverting input terminal).
Upvote 0 Downvote
C

Found a classical paper from 1974. Circuit is given below. Wanted to understand the role of resistors and why they are connected in that fashion. 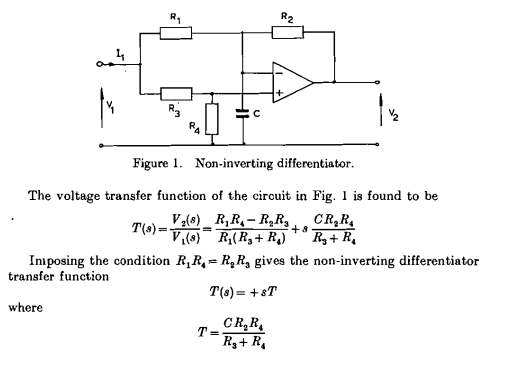 curious_mind said:
Found a classical paper from 1974. Circuit is given below. Wanted to understand the role of resistors and why they are connected in that fashion.

curious_mind said:
Found a classical paper from 1974. Circuit is given below. Wanted to understand the role of resistors and why they are connected in that fashion.
Click to expand...

Well, I thnk the transfer function can explain why the rersistors "are connected in that fashion".
However, it must be mentioned that the shown circuit suffers from the same stability properties as the simple inverting differentiator with an RC-lowpass in the feedback loop.
Upvote 1 Downvote

LvW said:
However, it must be mentioned that the shown circuit suffers from the same stability properties as the simple inverting differentiator with an RC-lowpass in the feedback loop.
Click to expand...

Yes, it has to be supplemented with compensation R and C to form a stable "practical" differentiator, similar to the post #3 link.
Upvote 0 Downvote
D 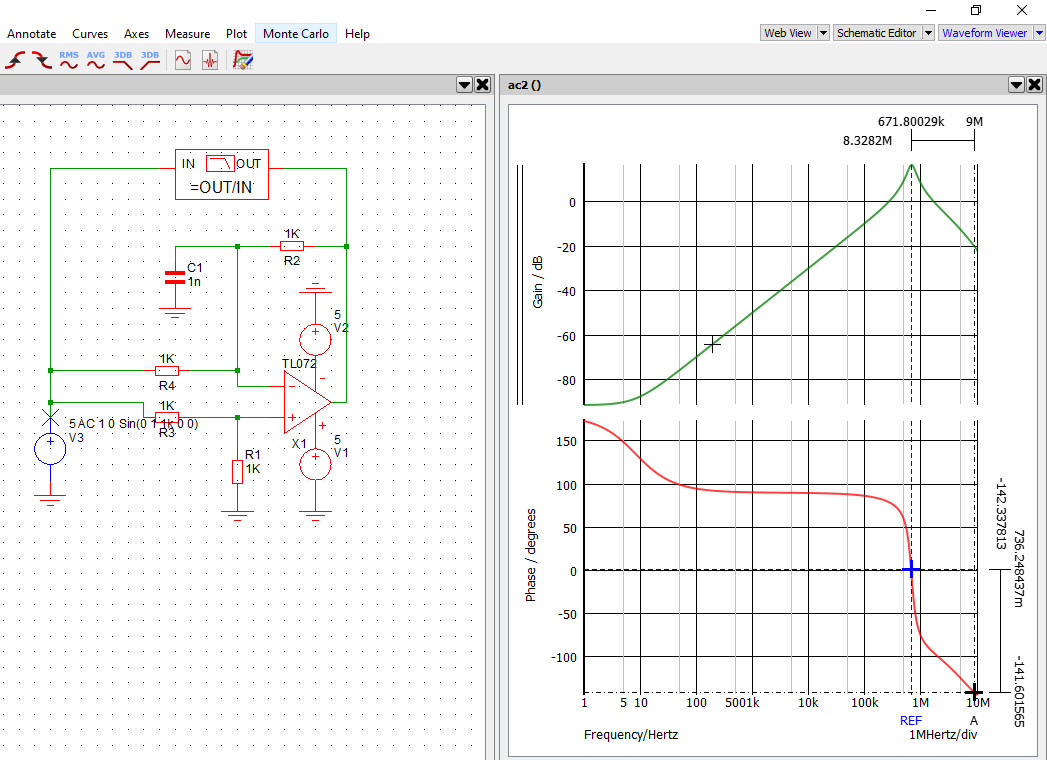 LvW said:
Hi Dana, the relatively steep phase response at f=1MHz shows that the circuit has a rather small phase margin (but itis still stable).
Nice picture.
Click to expand...

Agree. About 40 degrees. For this specific OpAmp.

Trying to understand this circuit from first principles. What is the role of voltage divider at non inverting input? and what is R4 doing there ( referring to post #16 diagram)?
Upvote 0 Downvote

with in inverting OPAMP circuit:

For an inverting differentiator R_IN is replaced by a C.
The impedance of C is infinite at DC and it is zero at infinte frequency.

Thus (for an ideal OPAMP) gain indeed goes from zero to -infinite.
And this is hao a differentiator should do.

*****
Now with an noniverting OPAMP circuit:

One can say that one connects the C with a R to GND to the noninverting input...so at DC the "gain" of this RC is zero, so the overall gain becomes zero. This is correct so far. But then you just have an RC circuit followed by a fixed gain OPAMP circuit. Basically you get the function of a simple RC, which is not exactly the same as an differentiator.
An ideal differentaitor has linear gain vs frequency ... and has no cutoff frequency like an RC: f_c = 1 / (2 * Pi * R * C)

Now the additional circuitry simply overcomes this drawback. It makes a true differentiator ... until the limits of the OPAMP itself.