What is electromigration? What are its effects?

What is electromigration? What are its effects?
Z

Electromigration is generally considered to be the result of momentum transfer from the electrons, which move in the applied electric field, to the ions which make up the lattice of the interconnect material.

As integrated circuits become progressively more complex, the individual components must become increasingly more reliable if the reliability of the whole is to be acceptable. However, due to continuing miniaturization of very large scale integrated (VLSI) circuits, thin-film metallic conductors or interconnects are subject to increasingly high current densities. Under these conditions, electromigration can lead to the electrical failure of interconnects in relatively short times, reducing the circuit lifetime to an unacceptable level . It is therefore of great technological importance to understand and control electromigration failure in thin film interconnects. 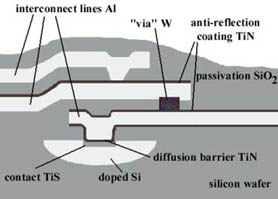 In conventional metal wires like those used in house wiring, joule heating limits the allowable current to about 104 A.cm-2. At current densities higher than this the wire will heat up and fuse. Because they are deposited onto large efficient single crystal silicon heat sinks, thin film interconnects in integrated circuits can sustain current densities up to 1010 A.cm-2 without immediate damage.

Electromigration causes several different kinds of failure in narrow interconnect. The most familiar are void failures along the length of the line (called internal failures) and diffusive displacements at the terminals of the line that destroy electrical contact. Recent research has shown that both of these failure modes are strongly affected by the microstructure of the line and can, therefore be delayed or overcome by metallurgical changes that alter the microstructure.

Electromigration is generally considered to be the result of momentum transfer from the electrons, which move in the applied electric field, to the ions which make up the lattice of the interconnect material.

When electrons are conducted through a metal, they interact with imperfections in the lattice and scatter. Scattering occurs whenever an atom is out of place for any reason. Thermal energy produces scattering by causing atoms to vibrate. This is the source of resistance of metals. The higher the temperature, the more out of place the atom is, the greater the scattering and the greater the resistivity.

For electromigration we need a lot of electrons, and also we need electron scattering Electromigration does not occur in semiconductors, but may in some semiconductor materials if they are so heavily doped that they exhibit metallic conduction.
DRIVING FORCES

a) Direct Force : Direct action of the external field on the charge of the migrating ion.

b) Wind Force : Scattering of the conduction electrons by the metal atom under consideration.

For simplicity, the term “electron wind force” often refers to the net effect of these two electrical forces. This simplification will also be used throughout the following discussion. The schematic picture of these forces can be seen in figure .

S
What is an eddy current and its effects?

Apr 5, 2010
anujsantro
A
J
What is an insulator and what are its functions?

What is electromigration and how does it occur ?