Hi,
I have an Intel Pentium 4 and i want to design minimum circuit that is require for read instruction for example blinking LED.
please guide me

The Pentium IV is a processor, not a microcontroller or SoC.

The minimum circuit is referred to as a "motherboard" which provides the required RAM, ROM, bridge and interface chipsets, along with other required components.

You will also need an ATX power supply or equivalent.

Combining them together, constructs what is commonly referred to as a Personal Computer (PC).

If would you like to experiment around with the x86 core as an embedded platform, I would suggest using the Intel Galileo series of SoCs.

I want to design it myself.

Be specific. You're being too vague again. Design what, a motherboard for a Pentium 4 or a Galileo Development board?

Well then, rather than inquiring as to how to blink an LED with a Pentium IV, you first task would be designing a motherboard from the ground up.

A truly complex and arduous task indeed, one which I do not believe you have fully come to grips with its complexity.

On the other hand, if you are set on blinking an LED with x86 architecture by designing and constructing a functional circuit from the chip up, you would be far better off finding an Intel 8086 and start from there. It would still require some time an effort finding the necessary parts and assembling a minimal circuit, but is is certainly doable.

Or you if are in the mood for a bit more of a challenge, obtain a Quark SoC X1000 processor of which the Intel Galileo is based and attempt to design and construct a minimal circuit. Intel has plenty of documentation and benchmark designs available for just such a challenge.

However, designing a functional motherboard for a Pentium IV, with memory, flash ROM, BIOS, etc., is a lofty goal indeed. As you certainly will not be building it on a breadboard or prototyping board, the PCB design and fabrication skills required alone will probably make your hair turn gray or fall out before its time.

Of course, you could always attempt to wire wrap it. :lol: Sorry, inside joke.

Swimming the English Channel has never been a goal of mine, neither is the challenge of designing and fabricating a Pentium IV class motherboard. :wink:

I'm be able to design PCB in 4 or 6 layers can you help me for design it's schematic?

I'm afraid PCB design and fabrication is far from my area of expertise.

However, we do have several active members and a few moderators whom are very knowledgeable in those regards. I would suggest posting any PCB design question in the following section:

Of course, PCB design and fabrication is only one hurdle of many you will encounter if you proceed with this task.

It's likely you will need to incorporate an appropriate bridge chipset, memory, flash ROM, clock source(s) and write a BIOS to boot the processor into some usable state.

And I suspect, I've omitted one or two other required items to fully implement the design to a useful functionality.

You can review an Intel Pentium 4 design guide to get an idea about the project complexity, e.g. for the 845 chipset **broken link removed**

B.t.w. you didn't tell which Pentium 4 type you have.

The Pentium 4 system achitecture stands against designing a simple "minimum circuit". You'll need always both support chips to connect e.g. a BIOS flash. You don't need external RAM for a blinking LED application, but the system is still rather unhandy. I don't expect that other Intel or third party chipsets are much better in this regard. 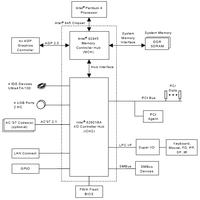 The task is a bit like swimming the English Channel to have lunch in France.

Certainly possible, but why?

If it's a challenge you seek, you would benefit more by developing your own Galileo development board.

If properly planned and executed, at least you would have a viable platform based on a current device, which you then could use to develop embedded applications.

Reviewing the original question, I'm guessing that he wants just to draw the circuit and layout of a flash-LED, being the Pentium4 the PC platform where will run a CAD tool. Seriously speaking, he needs to elaborate more the need.


panda1234 said:
I have an Intel Pentium 4 and i want to design minimum circuit that is require for read instruction for example blinking LED
Click to expand...