How not to switch DC converters

Hello, this is my sad post. I've designed a motion sensor alarm and soldered it part by part, it is mostly burned now including the Arduino. I want to know why is it a terrible idea to switch Boost converters with low side MOSFETs.

My most terrific mistake was to connect the boost converter directly to power without trying it separately, thus it gave 30V output, I immediately turned the switch off but it kept on 30V until I plugged the USB cable off the Arduino. The Arduino was connected to pc from a different source but I didn't think it had anything to do with it. After some time 555 timer got hot as expected as its maximum voltage rating is 18V. Interestingly Arduino's voltage regulator is also damaged because it gets really hot from now on even when it is just connected to PC. Even though the boost converters are connected parallel they divided the 9V adapter input to each other as 4.5, I didn't understand why, maybe current? I think Voltage x Current is similar in input and output of converters, considering the Al2 and D1 wasn't connected at the test, there was no power abusive device, it was only the timer IC, I don't think boost converter's failure to raise the voltage is caused by low current limit. The 24V boost converter can't sustain 24V at output but it can only raise to 4 volts (lower than input) on the contrary the 12V boost converter was successful.

Okay so many unknowns are here, the thing I am asking is, what terrible design do you see in this such simple circuit. Is the high voltage at converters finding an alternative way to ground through Arduino when IRLZ44 is off? Can current flow backwards from boost converters? Is it better to do P side switching instead of N here? Should I use P MOSFET with optocouplers?

There are usually shutdown pins in converters but this was a module with inductor and capacitor, I want to learn how to shut them down as well.

I know the post is mixed up but I hoped the mistakes are obvious, thanks.

plus: raw pin was missing on the model so I drew VCC and Raw the same, in real life ofc that's not the case also batteries wasn't connected at the test. 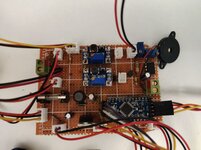 why have you got 1uF on a data line ?

Many problems in there, not only the one Easy peasy pointed out but:

R24 & ZD2 do nothing at all,
9V 'Sine' (= AC!) feeding two Li-ion batteries and with no charge control,
The 9V 'sine' input has no power return yet you expect it to conduct through Q6. (is a ground missing?)
Check the 'boost' devices have isolated outputs, my guess is they don't.
You probably shouldn't be driving a piezoelectric buzzer directly from an Arduino pin.
Pin 1 of U3 seems to be a power source but connects directly across B1 so what does L1 & D8 do?

I would strongly advise you check whether those boost converters have isolation first. I don't recognize the modules but from the photograph they don't seem to have transformers on them so it is likely that pins 3 & 4 are internally linked together.

Easy peasy said:
D1, an LED - has no limiting resistor
Click to expand...

It surprises me too, they sell LEDs with voltage ratings around here and as far as I know the current increases when led turns on. Still they don't burn so I use them this way.

No no, it is ana adapter, it outputs DC

betwixt said:
V 'sine' input has no power return yet you expect it to conduct through Q6.
Click to expand...

Yes that's the whole plan, I don't want the converters to be on for power saving reasons, that's why I disconnect their ground with a mosfet when unused. So is this a problem?


betwixt said:
You probably shouldn't be driving a piezoelectric buzzer directly from an Arduino pin.
Click to expand...

But current rating was 10 mA still?

Most of the time yeah, they are there if I ever want to discharge the batteries. I think it extends their life to keep them not fully charged.

betwixt said:
Check the 'boost' devices have isolated outputs, my guess is they don't.
Click to expand...

I've just checked and they don't, is it a problem?

betwixt said:
Pin 1 of U3 seems to be a power source
Click to expand...

No, the model might be misleading, it is the Vin of the sensor. You can only call Data line as power source. The data line is always 0V and immediately rises to 3.3V when sensor detects. The cap is there as a filter.

I'm surprised that you didn't directly point out my ground preventing Mosfet switching was wrong hmmm.
Click to expand...

... because it isn't wrong as shown but your schematic has no ground connection except 'G' on the Arduino!
For example, if the NE555 GND pin is connected to the Arduino 'G' pin, the MOSFET will be shorted out through the boost module.

In principle, there is no problem with disconnecting power using low side switching but you have to remember that in the 'off' state there is still power available on the load and you have to avoid any connections that might leak current to the 'ground'.

Check the buzzer, if it runs on DC you might be OK but the one shown looks like a piezo element that needs AC drive. If it is, they are highly capacitive and the load on the Arduino could be much higher than you expect. Think in terms of I = V/Xc where Xc is the capacitive reactance 1/(2 * pi * frequency * C). At very least, add a series resistor to limit the drive current.

betwixt said:
if it runs on DC you might be OK but the one shown looks like a piezo element that needs AC drive.
Click to expand...

It is AC, I control it with PWM signal. Well, I understood the concern of yours about capacitance and I'll power it through a BJT next time.

betwixt said:
your schematic has no ground connection except 'G' on the Arduino!
Click to expand...

G on the Arduino is connected to the ground of 9V adapter ground (or the battery ground). The raw output on the upper side (J3) is the same thing as raw battery (B1) so B1=J3 and their + and - sides are connected. The only things that has no ground are boost converters when the MOSFET is cutting.


betwixt said:
because it isn't wrong
Click to expand...

Omg, well I am happy that I designed a correct circuit (the only problem was the buzzer and the led resistor) but now I' am confused, why did the Arduino got damaged because of the 30 volts that occurred at boost converter? Maybe the high current flew through my USB and damaged the USB as well, I'm very confused. Should I redesign with some protections and hope it won't happen again?
Upvote 0 Downvote