Deterioration of LCD display on a digital watch

11 years ago I bought cheap digital watch and somewhat surprisingly for a 5$ watch it has worked ever since. It has even withstood fair share of knocks and bumps, once I hit it against the wall so hard that it scraped some concrete off. The only problem with it is that display deteriorated a lot over the years. Even when it was new, the heat would make the display illegible. At first all the segments would appear to be on and if it was heated even further (direct sunshine for example) the whole surface of the display would turn black. When it was cooled back down it would return to normal, but over time it became hardly legible even at room temperature. You can only see digits when looking slightly from above, if you look straight at it all the segments are on. The deterioration started during one extremely hot summer, I was spending a lot of time outside at 45-50° C (110-120F). When the battery is out all the segments are off, but the background still appears dark, darker than what it used to be when the watch was new.

I'm just want to know what happened here. I know that lcd displays have problems at high temperatures - is that because of the heat excites liquid crystal or because of something else? Why would this become permanent and could it be reversed? 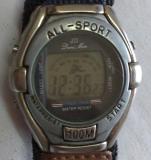 Typical life of LCDs is 80000 hours, that translates to 9.13 years. Yours is pretty much performing well going by this norm.

Normal operating temp. is from 30-75C. But we do get close to high heat sources (may be a gas stove) or a fridge twice thrice a day. That may impact the LCD performance.

jeffrey samuel said:
in real world and 11 years for a LCD watch is far too much
Click to expand...

That may be so, but the digital clock in my 26 year old car (Renault 11) is working just fine and it is on all the time, except when the battery is taken out for water refill or replacement. Also, two of my uncles have Casio watches that are probably 30 years old. I guess that depends on the quality of materials.
J

not only that the usage by the user depends