I know some basics of how to put together a circuit, but no idea how to create it. I'm trying to create a circuit that would take an audio signal (Lows 20 Hz to high 10,000 Hz or more) to actuate a solenoid. I'm hoping to be able to have the solenoid operate at the frequency (including varying wave shapes) inputted. Is that possible?

I really appreciate the help with this!

A solenoid is a slow moving thing. It probably cannot produce a frequency above a few hundred Hz. Varying waveshapes of a few hundred Hz are produced by harmonics that go into the thousands of Hz.
Why not use a loudspeaker or vibration transducer as an audio solenoid? But its motion is not far.
M

If I can only achieve low frequencies, that's something I can live with. How would I go about creating that circuit? I want to build it and experiment with the limitations once I see how it works.

Is my understanding correct: with one frequency you want to control one solenoid, with another frequency another solenoid?
If so, how many solenoids?

I read it as one solenoid moving in sympathy with the audio signal. Essentially a 'voice coil' actuator mechanism. It will work up to a few hundred Hz with reduced motion but to get full opeational range the top frequency will probably be no more than maybe 10Hz. To expect 10KHz is unreasonable, the mass of the mechanism alone would restrict the highest frequency and the inductance of the coil would make it technically difficult to do.

Makework - it would help if you gave us some idea of the size of solenoid and what work it has to do.

I have worked with G-force (not the video cards!) testing where the 'solenoid' pulled weights of about 2Kg but the audio amplifiers driving it were rated at 5KW!

It sounds like he already has the solenoid and needs an amplifier circuit to drive it.
Of course he has no idea about its impedance nor how much power he needs.
M

Basically I'm trying to create a mechanical 'wood pecker' that 'pecks' at the inputted audio frequency. This is the best way I can describe it. It needs enough force to strike a material and make an audible sound.

Once I have the solenoid doing this, I will be experimenting with different surfaces.

If it sounds like art project, it's because it is.

Obviously you are talking about an "electromechanical" solenoid, a transducer that converts an electrical quantity into a mechanical (way, velocity or acceleration).

An electromagnet needs a DC bias to achieve the intended action, otherwise the generate force would be proportional only to the absolute value of the electrical signal. It also needs a restoring force, e.g. a spring, to move back and forth.

By working of inertia force, it will be also difficult to achieve the intended action at higher frequencies.

An electrodynamic transducer like the voicecoil used in a speaker would give performance.
B

If you look closely at a large speaker, you can see it moving visibly, particularly in response to loud bass frequencies. That is the action of the voicecoil. It may be able to drive a lightweight mechanism.

If you want an electronic circuit to move the solenoid, here is a simple transistor amplifier. It turns a load on and off with rapid DC pulses, in response to an AC signal input.

The two transistors form a darlington pair, which greatly amplifies a weak audio signal. It makes a square-ish output waveform. The output transistor must be able to carry sufficient current. 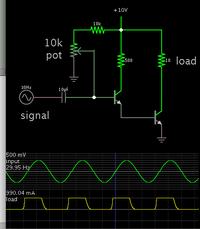 Something like this? Would this be able to take an audio signal?

Try the test yourself - take a big loudpeaker, face it upwards and place a house brick gently on the cone. Hook it up to your stereo and turn the volume up. If the brick moves you have proven it will work.

The principle of voice coil actuators is used widely, in fact the hard disk in your computer uses one to position the heads, it's that you might hear as a rattling inside your computer when you access a file. What matters is the scale, the coil requires more power to move a greater mass. In a solenoid, the mass is usually a metalic rod, block or ring which in relative terms is quite heavy and therefore needs a lot of 'push'. The power has to come from your audio signal so depending on size, it could need a considerable sized amplifier, possibly several hundred Watts. The power needed is dependant on the mass and the speed you move it, the faster it moves the more power it needs.

If all you want to do is tap "woody woodpecker" on a surface, it is fairly easy, if you want to reproduce the audio you have to consider that above maybe 10 taps per second, you either need a very low mass solenoid, a very short movement or a very high power. Even in the video you will notice the amount of movement is considerably less as the speed increases. It is possible to maintain the 'stroke' length at higher frequencies but only by dramatically increasing the power levels. In the one shown, to get full stroke at the highest frequency they use (~500Hz at a guess) would need forced air cooling, maybe even liquid cooling due to the high temperatures the losses and air friction would create.

The other point mentioned earlier is a solenoid moves according to absolute current through it, in other words it moves the same way regardless of the polarity of voltage you place across it. Your audio will almost certainly be AC which means it's polarity reverses during each cycle of sound. If you want to hear some semblance of the audio quality, by that I mean the audio should be recognizable if it was voice or music, you have to apply a bias to it. It means instead of the audio directly driving the solenoid, you use it to modulate a fixed 'push' already on it. That allows you to increase or reduce the effect of the fixed 'push' and gives a more linear movement relative to the audio you apply. The fixed bias can be mechanical, using a spring mechanism, magnetic, using a fixed attraction or repulsion of magnets or by passing a fixed current through the solenoid as well as the audio.