Hello everyone. I am working on a project which a lot of people including people from some elctronic engineering communities have found very interesting but don't have the knowledge to help.

In the early 2000s an interesting display was created. It used 3 DLP chipsets from Texas Instruments projecting few thousand binary (1 bit) frames each second, custom video projection light engines and optics, mirrors and a rapidly rotating projection surface to create a 3d volumetric display relying on our persistence of vision. 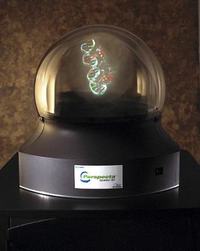 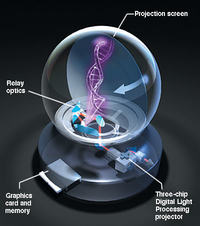 Here's are video of this product in action:


Unfortunately only about 25 of these displays were sold from what I've read, the company has been shut down and the patents sold. However, similar but noncommercial projects have appeared later, mostly done my researchers or university students (

I have written about this elsewhere asking for help with controlling the DLP chips without luck:

The problem is there are kits for doing fast projections my Texas Instruments, but they include everything, not just the board and are too expensive for a non-commercial project.

Normal off-the-shelf DLP video projectors can do 1000 Hz+ binary projections too and some refurbished can be had for very cheap, but do not allow to use them like that by default and need to be modded to work that way.

I have the knowledge to build such a display using the kits which are sold by Texas Instruments, but I can't afford them.

I have written a tool for converting video frames or images into dithered (both general types of dithering) 3 bit (8 color) images, actually 1 bit Red, 1 bit Green and 1 bit Blue channel images. This allows to use 3 DLP fast binary (1 bit) projections and combine their outputs with a dichroic mirror cube to fake full colored projections and volumes.
The resulting videos look very good.

Here is a frame from a 3d animation converted with both dithering methods: 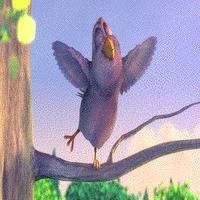 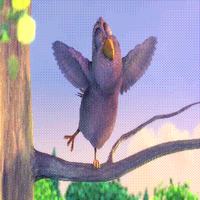 The 608x608 resolution is the native resolution of the DMD3000 DLP chip. Using the better chips we can get better resolution and quality.
Unfortunately Youtube destroyed the quality of video files I had prepared to show how it looks in motion.

Now imagine turning your head around the display and seeing the same 3d scene from different angles.

I am also writing a plugin for Blender (which is a free 3d program) for rendering volumes (2d slices of the scene) instead of a single 2d frame and then doing the same as my previous standalone program by reducing colors with dithering.

These tools will help creating content for such a device easier. I am a 3d modeller and I had written these tools for myself but I will be happy to share them when the display is built and tested.

While I understand why the product I mentioned was discontinued, why these displays aren't in everyones homes yet and not even used much in some professional fields I think such displays have a great artistic value and just too cool to not have for someone like me.
Just 3d abstract animations played on such a device is enough to make me want to have one.

So if anyone is interested in helping me build a board to control DLP chips which is the only thing keeping me from building this display, and have an open source project with tutorials, designs and the tools I've written available then please post here. Or you can also send me an email or contact via Skype/etc and we can communicate more directly if you wish.

The budget for this project is about $2000. It is enough to get 3 “DLP Lightcrafters” (the cheapest ones) from Texas Instruments but the refresh rate and frame rate I believe is too slow for those. I cannot offer a good payment for creating a board as this is and had to be a noncommercial project, but if we can build the controller boards or modify off-the-shelf projectors I can donate the remainder of my budget for all the help. I hope having such a display yourself is going to be enough of motivation for anyone interested itself.

BTW, DLP chips (DMDs) can be found for very cheap as replacement components for video projectors* or rear-projection TVs, much cheaper than from Texas Instruments.
Last edited by a moderator: May 26, 2015