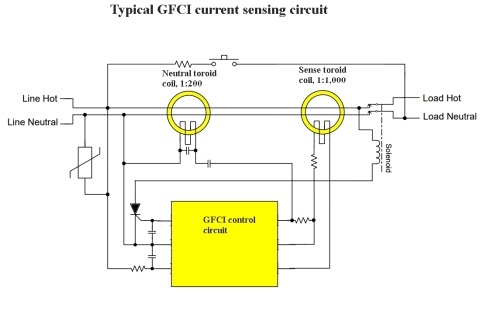 A typical way of detecting ground fault currents is through the use of a core-balance protection device. Here hot (sometimes called phase) and neutral wires pass through a toroidal (differential) current transformer. Normally, the vector sum of the currents in the live and neutral conductors will equal zero. If some of the current flows to ground through a conductor other than the neutral wire, the toroidal transformer detects this problem. The transformer then generates a signal that goes to a highly sensitive electromagnetic relay. The relay mechanically actuates a tripping mechanism to instantaneously isolate the supply.

In actuality, most ground-fault sensors actually contain two toroids, one for detecting hazardous currents to ground, the second for detecting ground-to-neutral faults. The second toroid sensor detects faults from ground to neutral. This toroid is typically wired together with the sensing toroid to form a feedback network that kicks in and breaks contacts when there’s a current between ground and neutral.

The National Electrical Code dictates that GFCIs designed to protect people (rather than electrical infrastructure) interrupt the circuit within 25 msec if the leakage current exceeds a range of 4 to 6 mA. (The GFCI manufacturer chooses the exact setting.) The limit of current imbalance for GFCIs designed to protect only equipment (not people) can be as high as 30 mA.

The need for GFCIs arises from the fact that current levels high enough to electrocute people are too low to actuate conventional circuit breakers. GFCI response times are designed to cut power before the heart goes into ventricular fibrillation, the most common cause of death through electric shock. 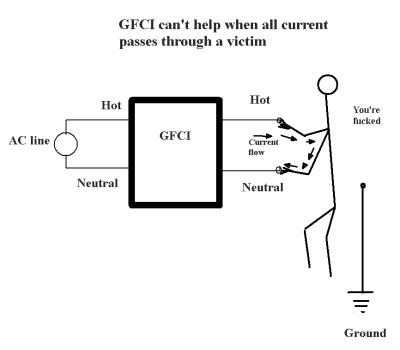 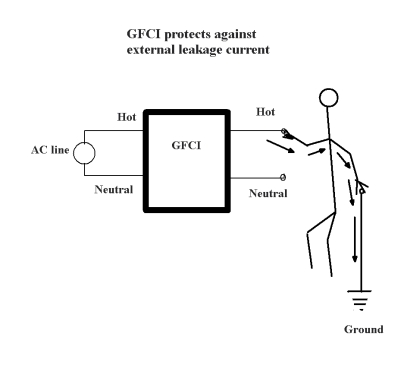 However, GFCIs can't protect against faults which do not involve an external leakage current, as when current passes directly from one side of the circuit through a victim to the neutral wire. Thus they don't protect against overloads or short circuits between the live conductor and neutral, nor against phase-to-phase shorts in three-phase circuits.

Finally, the term earth-leakage circuit breaker (ELCB) is sometimes used interchangeably with GFCI, though strictly speaking, the two aren't the same. ELCBs are generally used only with what are called TT earthing systems, where the earth connection protecting the consumer is through a local connection to earth (often near the receptacle), independent of any earth connection at the ac source. TT earthing systems have largely been replaced but the ELCB moniker for protective devices has remained.

Voltage ELCBs were first introduced about 60 years ago and current-sensing ELCBs (called residual current circuit breakers or RCCBs) about 20 years later. For simplicity, IEC decided to apply the term residual current device (RCD) to differential-current-operated ELCBs. Residual current refers to any current over and above the load current.

Do u got any circuit for this application??
https://www.electricalsafetyfirst.org.uk/guides-and-advice/around-the-home/rcds-explained/

Is there any technique that can be detected by hardware.??