Why does Setup time of a flipflop depend on frequency ??

Hi,
Can someone please explain why setup time of a flipflop depends on frequency....of the clock....??

Thanks!
Satish
Sort by date Sort by votes

I'm unsure what you are talking about. Maybe it's the other way round.

--> please give some context, best a link to an according document.

sara1983 said:
Can someone please explain why setup time of a flipflop depends on frequency....of the clock....??
Click to expand...

Normally it doesn't.
Why do you think it does?
Upvote 0 Downvote
S

Let me reframe the question....

When setup time occurs we remove it by reducing the frequency or increasing the time period...
Why is that the case ??
Upvote 0 Downvote
D

There could be a correlation between setup time
and max toggle across technologies.

As you approach the max clock capability there's
a good chance that some nodes are not fully
settled and so setup time might change slightly.
But I'd expect this only to apply to "edgy"
ranges, not a proportionality across decades
of clock frequency.

When setup time occurs we remove it by reducing the frequency or increasing the time period...
Why is that the case ??
Click to expand...

Sorry for the confusion.... it's not setup time but setup violation.
Let me reframe the question....

When setup violation occurs we remove it by reducing the frequency or increasing the time period...
Why is that the case ??
Upvote 0 Downvote

In Figure 1-1, the dashed arrow represents a timing path. The change in signal data caused by a clock transition at flip-flop FF1 must be propagated to flip-flop FF2 before the following clock edge arrives at FF2, so that the logically processed data can be reliably latched into FF2. The change at FF1.Q might affect the output of the combinational logic cloud at FF2.D, depending on the logic itself, the data value, and the values of any side inputs feeding into the logic. The change at FF2.D, if any, must occur before the next clock edge arriving at FF2.
Click to expand... 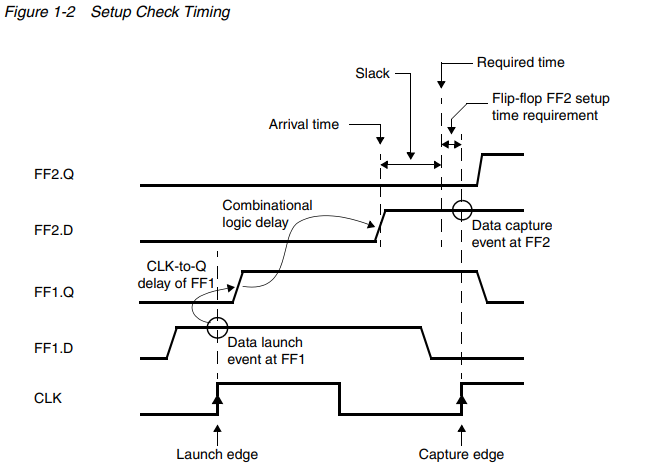 Figure 1-2 shows the timing for this path. The arrival of a clock edge at FF1 latches the data at the input FF1.D into the flip-flop. It also places that data on the flip-flop output, FF1.Q, after the clock-to-Q delay of the flip-flop. This is called the launch event for the timing path.

The change in value at FF2.D must occur before the arrival of the clock edge arriving at FF2, by at least an amount equal to the setup time requirement for the flip-flop. This latest allowable arrival time is called the required time for the path. The latching of data at FF2 is called the capture event for the timing path. In this example, the capture event occurs one whole clock cycle after the launch event.

The preceding timing check is called a setup check, which verifies that a change in data arrives soon enough before each clock edge at the sequential device. This is the most common type of timing check that drives synthesis and optimization. However, other types of timing checks can be performed as well.
Click to expand...

It's got to do with the active edge..... why are hold checks done at the same edge...while setup checks done at consecutive edges... ?? Can someone please explain ??
Upvote 0 Downvote

I could continue with retelling respective documents, e.g. said Synopsys Timing Constraints and Optimization User Guide. However, that's basic logic design stuff, why not read the documents yourself? You can come back if you have additional questions.
Upvote 0 Downvote
T

sara1983 said:
It's got to do with the active edge..... why are hold checks done at the same edge...while setup checks done at consecutive edges... ?? Can someone please explain ??
Click to expand...

because that is the definition of a hold problem.
Upvote 0 Downvote

@sara1983
Yet another question re-frame suggestion for you from my side:
"Please point me to freely available documents/atricles where I can read about and understand about setup and hold time violations".
Upvote 0 Downvote