Hey, I have a dilemma about a low-voltage circuit.

I have a hi-Z 5V DC source with a capacitor on its output. When this source is enabled the voltage on the capacitor starts to rise slowly from 0V towards 5V. I would like to implement a low-power Schmitt trigger to detect when the voltage has reached a certain threshold (Vth) or fell below the minimum (Vtl) to enable or disable power to a small follow-up load. This voltage detection circuit should output a high or a low signal with the default being low. That catch is that the circuit must also be powered from this same voltage source. How would I implement such circuit?


I tried to do it with a classic non-inverting Schmitt trigger by using an opamp like most webistes and tutorials suggest (see posted schematics). The issue is that it doesn't seem to be working with slowly rising voltages because it apparently outputs a high signal from the start. I need a circuit that works with a slowly rising/falling voltages between 0V and 5V and output a LOW signal until the voltage rises past Vth. My guess what happens here is that the opamp isn't able to drive the output line low in time because most opamps have a minimum supply voltage of 1.6 to 1.8V. So when Vcc starts to ramp up some voltage will appear on the opamp output via the resistors R1 and R5 which will pull the initial state HIGH once the opamp finally powers on. I can't reduce R6 to a lower value because it's supposed to be a low-power circuit and would drain too much current.

Is there a (better) solution to this? 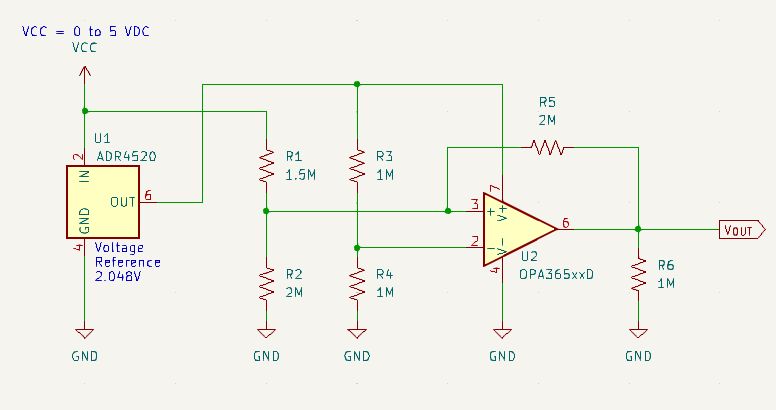 Complex components often have peculiar power -up behaviors that they don't discuss. Simple is good. Imagine a zener feeding a resistor divider and base of a PNP, collector load to GND. This satisfies low current during charging until near threshold and a default low output. Add hysteresis as you like (like opening or closing a shunt within the base network).
Upvote 0 Downvote

At a guess, you could try adding a capacitor around the reference divider to slow down the OA sensing that Vref is the same as Vin from T = 0.

If you're powering the OA from the reference, which is in turn powered from the slowly-rising 0V to 5V input, the reference should/will have an inescapable start-up delay compared to a resistive divider only that should be considered.
Upvote 0 Downvote

On simulating your circuit and looking for solutions, I found the principal issue was: connecting the op amp V+ power pin to the voltage reference output, when I connected it to Vin, the horrible non-zero Vout signal went away, that applies with or without Cdelay in-circuit - the issue seems to stem from which node the OA is powered from (in the simulations I just did, at least). Not sure what you would do if it is vital that the OA output not exceed 2.048V, besides e.g. clamping the output one way or another to ~2V...

I simulated with both the LMC6464A and with the OPA322 as the OPA365 is not in the models in the simulation tool, I'm sure you'll appreciate the time it takes to locate and build models, and I suspect OPA365 and OPA322 are very similar parts (OPA322 gives a much cleaner/tidier Vout signal than the LMC6464, btw).

Cdelay as 100nF was equally valid as the 1uF in the schematic because Vthr had reached its 1.024V level by the time Vin also reached 1.024V, so Cdelay value is a matter of choice/requirements, presumably whatever minimum amount of time it takes for Vref and Vthr to get to where they need to before the Vin signal reaches the OA.

Let's ignore AM VS1 as the 330mA spike is due to the 10R*1,000uF inrush current at power-up. I removed the 2M R5 hysteresis resistor for no other reason than just because I wanted to, it works the same with or without it (with minor differences, obviously). 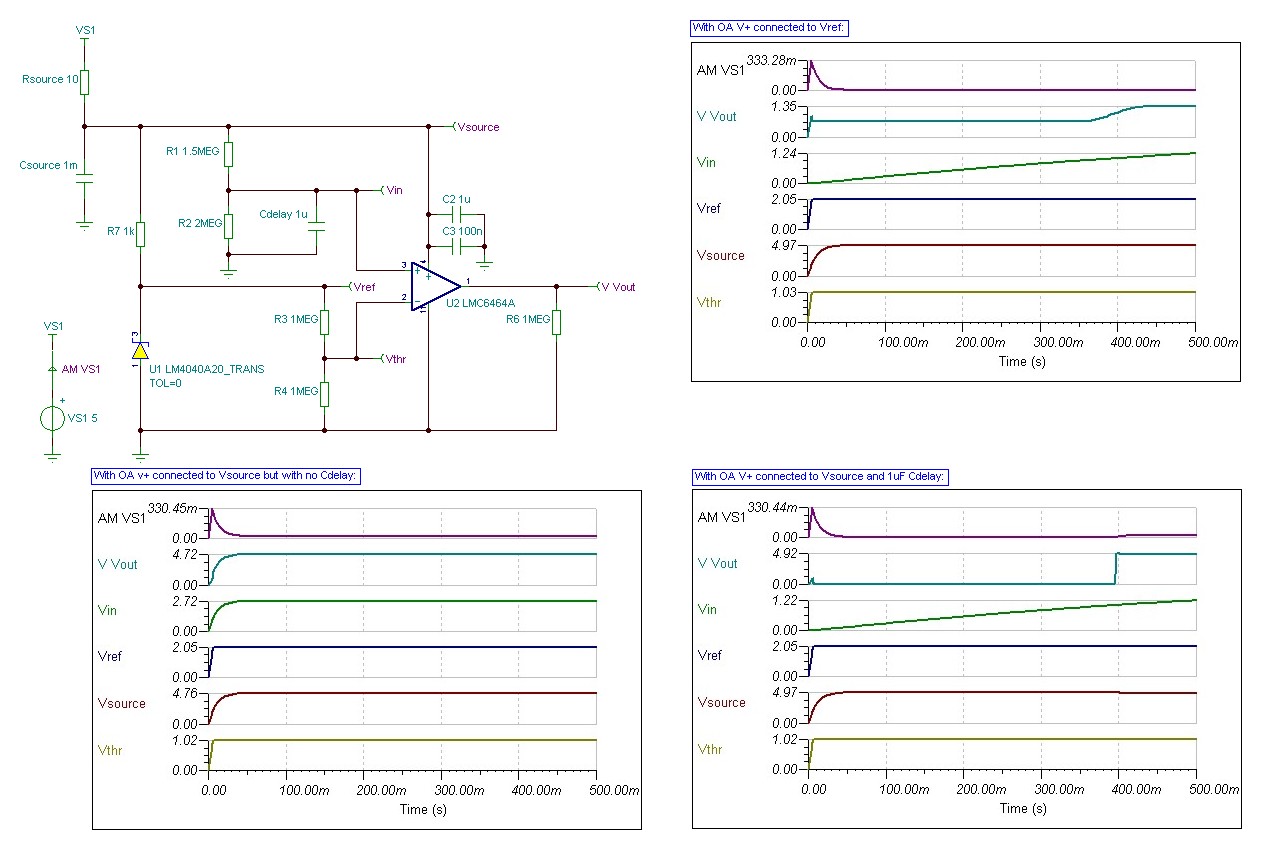 A programmable unijunction transistor might interest you. NPN & PNP arranged to form a thyristor (SCR).
Load current snaps on when voltage rises to a set level.
Current dwindles as voltage goes down.

The simulation below is untested. Performance may improve with experimentation. 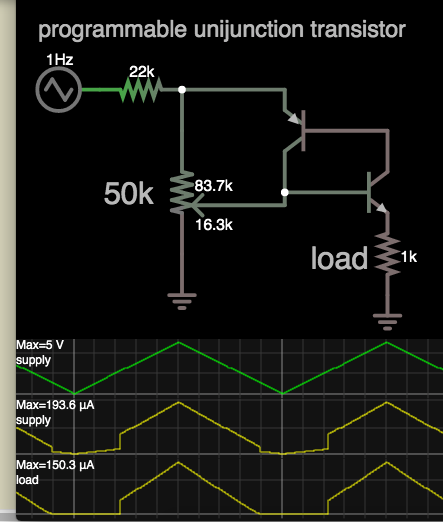 I think your fundamental problem is that you're expecting a device with a specified minimum VCC of 2.2 V to work below 2.2V.
Upvote 1 Downvote

I would check micropower supervisory chips like TPS3803. They have probably most of the features you need. Status output is open drain which can be converted to the intended signaling with a few external components.
Upvote 0 Downvote
E

I can't get the opamp schmitt trigger circuit to work no matter what. Always overshoots upon powerup and ends up in the HIGH state. I think the main issue here really is the fact that I'm trying to run the device under its minimum specified voltage like barry suggested. I've also tried that PUT circuit suggested by BradtheRad without satisfactory results.

I think my best bet would be to use a dedicated IC for this task i.e. a voltage detector/supervisor.

Gonna give it a try.

Also I tend to say: a circuit without a capacitor is no reliably working circuit. I know this is not 100% true, but in times with so much HF noise (Wifi, cellular phones, bluetooth around ... combined with faster and faster devices .. it calls for trouble. This is also why we need a more properly designed PCB layout than in the past.

--> either you need an additional power supply or you need to change to a meaningful "lower supply voltage requirement".

I agree with choosing a dedicated IC for that situation. Usually they are optimized for this situation and have additional features you can´t get easily with your own design. And if you take the "development" cost into account ... it makes it pointless to invent what others aready did.

The circuit does have decoupling caps on the power pins, I just haven't drawn them in for brevity.
I wasn't expecting the opamp circuit to work anyway, so I was looking for replacements.
Upvote 0 Downvote

Look at the ap circuits, some threshold circuits on battery monitoring might
be adaptable. 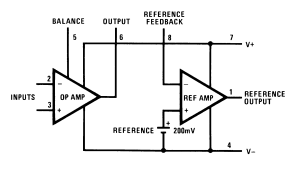