Hi,
Do you know pri and sec resistance of this?

You'd have to measure the resistance or get it from the manufacturer.
T

Hi,
Does anyone know of the datasheet for the well known Clairtronic Mains autotransformer?

It has no part number on it, just a hand written Type number of "10555". And a hand-written serial number of "360/022006"
I believe many will know the one that i mean, as this particular one is massively common in many electronics co's that i have been to. It has a light grey paint work on its cylindrical type enclosure, with black dial on top so you can rotate it to your desired voltage.
All else it says on it is 240VAC in, 0-240VAC out, and a little split coil diagram with connections 1,3 and 5. The dial markings go from "0" to "270". From the coil diagram, its obvious that Vac input is always >= VAC output.
I am trying to find out the coil resistance. Officially. I am not allowed to take it too much apart. I took off the cover which covers the input/output lead entrance points, and measured the primary and secondary resistances with the wiper at max......so the readings should have been the same, but were not....
The primary resistance was 0.8R. However, the secondary resistance came out as 2.3R, so i am guessing the wiper is making up the deficit in resistance. Presumably this means its damaged?
Does anyone have the datasheet?

How do you measure primary and secondary resistance of your autotransformer? Do you understand which winding resistances form the effective transformer output impedance?
C

What is actually need to measure, and that is a difficult task, is the impedance of the winding. It is difficult because it varies with the load (current) and the wiper position (voltage output).

For all practical purposes, model it as a "regular" transformer with the primary and secondary in series. Adjust input and output as per taste.

When everything fails, just simulate.

I own three autotransformers. Here's the 3000W unit. Bidirectional, fixed ratio, 120V-240V. I measured ohmic resistance using my DMM on the lowest range. Every reading was under 1 ohm. I tested between taps and commons, red, black, all. 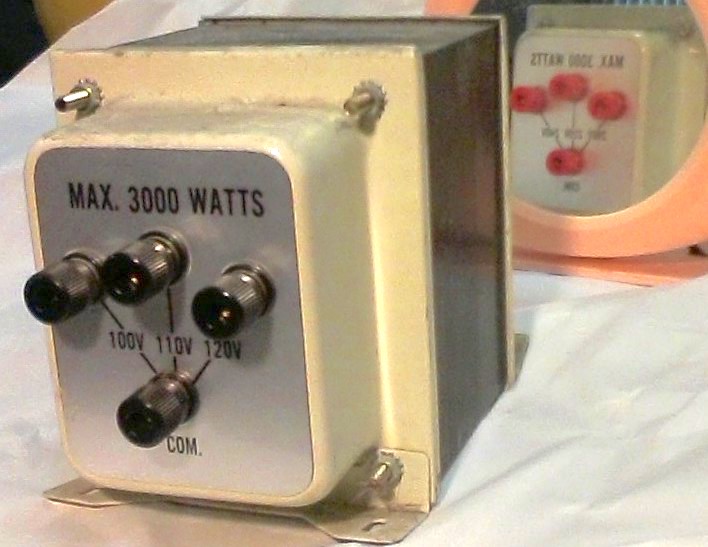 It occurs to me that you might be better off with
a plurality of different-ratio transformers, than
a Variac. For one, you'd get isolation. For another,
as much copper and iron as you like, at cheapest.
Surplus, even. Rather than fiddling about on the
Web, buy a brace of fat isolation xfmrs and start
removing primary windings, in a series that nets
you a "good enough" step resolution for whatever
experiment you think you're going to do.

Sure, it's select-plug rather than "turn the knob".
You could probably step through smartly if you
had a high power contactor matrix under logic
control.