Using a Micro controller as a pwm regulator in a SMPS

Instead of using a PWM regulator like a SG3525 or a Tl494 is it possible to use a microcontroller like Atmega?
D

It's possible but what's the point? It will be less reactive, less reliable, more expensive.
Well, I don't know the price of Atmega, but e TL494 costs less than 1 USD even if you
buy a single piece.

It's possible but what's the point? It will be less reactive, less reliable, more expensive.
Well, I don't know the price of Atmega, but e TL494 costs less than 1 USD even if you
buy a single piece.

and take up more space, and have a higher parts count, and take more time to construct and debug
S

Yes its possible. I have used an MCU as PWM regulator with voltage and current feedback loops and other interface as well. If you do it right you might be able to increase the overall efficiency. ATMEGA is relatively more expensive than other MCUs I used. Microchip's PIC16F18xx series can be considered and if are able you can use NXP's LPC11xx which are US$1 or less.
D

possible that is more interesting than tl494 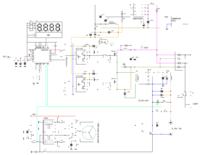 I would like to use a microcontroller so I can get a better understanding of how the rest of the power supply circuit works. With a microcontroller I can control all of the variables and if something is not working like I can change the code and see what changes without having to physically alter the circuit. Right now i am having hung up on really basic problems like why the two output pins on my tl494 are only outputing DC with no pulses, i cant figure out if the rest of the circuit is working because the driver isn't working. Being able to bypass this problem for a moment would be worth a few dollars.
N

With an improper designed SMPS will make you dance, RFI, EMI will often reset your controller. If you still insists on using UC than use it for display and mesurement in your system.
A

I would suggest the following pathway if you are dead set on doing it with an MCU:

-Spend a few hours trying to find app notes or example schematics of an MCU based SMPS. This will give you a little insight into what had to be done and what problems there might be that are special to using an MCU for an SMPS controller.

-See if you can get your hands on an evaluation kit of an SMPS that is very close to what you want to make as far as topology, voltage, current, etc. Its okay if it uses a controller IC. The idea here is that you will have a working example you can analyze with a scope and compare to whatever you end up making. This will help you troubleshoot your thinking and design.

-Modern cheap MCU's can sample and react to signals an order of magnitude faster than even a fast SMPS operates at. But there are some things, like the compensation network, which are not trivial to implement purely in code. You will have to have a solid grasp of exactly how those work before you could start to attempt that.

I would suggest that using an MCU because you can make changes faster is probably not going to enhance your learning as much as you might think. Depending on what sort of power conversion you are after, changing the transistors, diode, inductors, and passives may be just as important or more important than the fairly simple logic that actually generates the switching waveforms.