Please I need help from the programmers in the house. I am not a programmer myself but if a code is generated, I can dump it into PIC or AVR and place the device into my circuit. This is all I can do in this MCU of a thing.
The diagram above is only pictorial representation of the Project. It does not necessarily means that the wires must run as they do here.
I have used CD4060 to do this but it makes things complex and the accuracy is somehow poor. Dam me! I am not a programmer!!
THE PROJECT:
To design a delay off timer
When the SW1 is closed, power is applied to the system but the system will remain inactive.
If the SW2 is pressed (push & Release button), the system will come on and the LED1 will be lit, consequently LED2 will also come on, showing that the system has entered 30 minutes delay off mode which if it remains in this mode, the relay RL1 will be activated if the 30 minutes elapsed.
The system will enter any timer mode from SW3 through SW7 if their respective button is pressed.
If the SW2 is pressed again while on, the system will go off and also reset itself.
Please I will appreciate any help from the programmers here, thanks all.
P

Here is a PIC12F683 code. I have used mikroC PRO PIC compiler to write the code. I have compiled the code for Internal Oscillator 4 MHz. See image for circuit.

Thanks my man, I am sorry for my late response. Please let me study what you sent me. I will get back to you.
Thanks.
D

Thanks Deep One
M 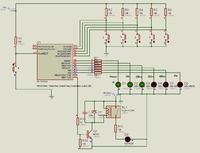 @ Deep One,
For Atmega8, I have also simulated it. It kept quiet at power on which is good. But pressing on/off button does not work, the pressing other buttons make their respective LEDs come all on without disabling the previous ones. Please see my post above.
Last edited: Aug 20, 2015
P

I have fixed the code. there were two problems. Now it is working fine. Check the attached project. I have tested for 30 minutes and it works fine. In the proteus file I have added labels so that the schematic is easier to understand.

Ok, please take a look on next revision

@ Pic Programmer and Deep One, I thank you. You are very useful here. I will check them out in Proteus.
Thanks.
P

In the rev1 code I have fixed two things. One is PORTB was not cleared during initialization and hence some LEDs were ON at startup. The second thing was in timer interrupt code instead of checking for 30 minutes, 60 minutes, etc... delays it was checking for 30, 60, 120, 180 seconds.
M

@ pic-programmer,
Thanks for the new edition ‘Time Switch rev1’
I have tested it and see the improvements. The problem in this new code is that if you select 30mins and then select another timer, the 30mins you previously selected will not deactivate. It remained on while the other selected timer will also be on. Pressing all the timers will bring all the timers all on. Then pressing the on/off button will reset all, this one is ok.
When any time is selected, selecting another timer should deactivate the one previously selected and so on.
Your relay action during power on is ok, only that I have left the time to elapse in Proteus but the relay did not activate after the expiration of 30mins!
@ Deep One,
Thanks for the new atmega8 _c&hex rev1 edition.
I have also tested your new code and it is 99% ok.
I have run the timer in Proteus and it works at the elapse timer (30mins tested, but I hope other will also work).
The only fault, but I hope it will be corrected, is that the relay comes on at power on.
Please, at power on the relay should not move at all. The PD7 Pin 13 of the ATMEGA8 should only be = ‘1’, at the elapse of the time selected.
At power on;
Relay = off. (PD7 Pin 13 = ‘0’)
After timer elapse;
Relay = on (PD7 Pin 13 = ‘1’)
This is the only thing that remains to be fixed in the code.

Thanks DEEP One and PIC-Programmer! I thank you very much for your times you spend to help me, I appreciate your good work.
D

DeepOne I thank you for your fast and dedicated responds.
I have tested your last file and it just work the same as the previous one.
As you can see, I have used the Q2 to force the Q1 go into off state until the end of timer elapse when the port PD7 Pin 13 will be "0", then Q1 will be on and then the relay will be activated. I can still use it like this if it cannot be corrected in the code. You have tried already.

See the attached file for the modification, if the fix can be done in the code then the Q2 will be removed.
P

This is the picture of the modification
D

it just work the same as the previous one.
Click to expand...

In my test that rev.2 version is work as - when power supply is on the Q1 is in off state, relay off, all LED off. First pressing the on/off button actuate 30 min countdown and also power led and 30min led, in this mode relay remain off and is possible switching between 30/60/120/еtc. time delays. If delay is expired relay is go to on state, time led is go off. If power button was pressed the system will return to initial state (relay off, all led off)
P

I have also made ATMega8 version of the project. Please have a look at it. I have tested it in Proteus and it works fine. I have used mikroC PRO AVR Compiler for writing the code but if you want it to be written in Atmel Studio or other compiler then mention it and if I have that compiler then I will make a code using that compiler.

You two are the best. I will check and see the best one that serves me.
E

DeepOne said:
In my test that rev.2 version is work as - when power supply is on the Q1 is in off state, relay off, all LED off. First pressing the on/off button actuate 30 min countdown and also power led and 30min led, in this mode relay remain off and is possible switching between 30/60/120/еtc. time delays. If delay is expired relay is go to on state, time led is go off. If power button was pressed the system will return to initial state (relay off, all led off)
Click to expand...

Hello DeepOne,
I am a newbie, just learning the microcontroller, I am using mikroC AVR.

Look at your coding above, that the function is very smooth and great for me, so
Could you please convert your code to compiler MikroC PRO for AVR.

Do you want the time delay LEDs to turn OFF when the delay expires and relay turns ON ?