This is my first Raspberry Pi project where I had to face HDMI layout guidelines, so my question is, if anyone has issues with my design (I would call myself quite a PCB design beginner anyway). As you can see, the HDMI connector is mounted onto the same layer as the RPi CM3, so if I want to avoid crossing 8 traces on 8 layers, I have to wrap around traces to connect from the other side of the contacts. I‘ve recently learned about matching signal lengths, therefor 3/5 and 8/10 rules for chamfers and avoided 90° degree angles when doing so. I took into account the minimum spaces between the differential pairs and a short and continuous return current path on the GND layer (I plan to do them even shorter by milling the orange vias to GND in the picture). My suspected problems though:

-Is there any chance, that my meandering trace matching pattern works as an antenna? Because it looks just like one (I don‘t think so, because for a maximum HDMI clock rate of 165 MHz it would need an antenna with a length of about 1,8m, right?).

-Some online guideline said something about 7,8mm clerance to surrounding traces and parts, so what about the 5V trace, the LEDs and my screen interface?

-I want to avoid buried and blind vias. So there are some vias which I have to guide from top to bottom layer just between the differential pairs. Any issues with that?

-I somewhere read, that whenever line-to-line-spacing changes, there will be unwanted impedance changes as well. When you look onto the red lined box, over a quite great distance this spacing changes unsymmetrically and skew. Any problems with that?

-Does the general rule count, the wider the trace, the better? Traces are 0,2mm and vias 0,3mm and quite big compared to other projects. Any negative effects on impedance as well?

-I'm stitching through the GND layer twice per trace, any issues with that?

A lot of questions, but it will gain a lot of knowledge for me if answered. Thanks in advance! 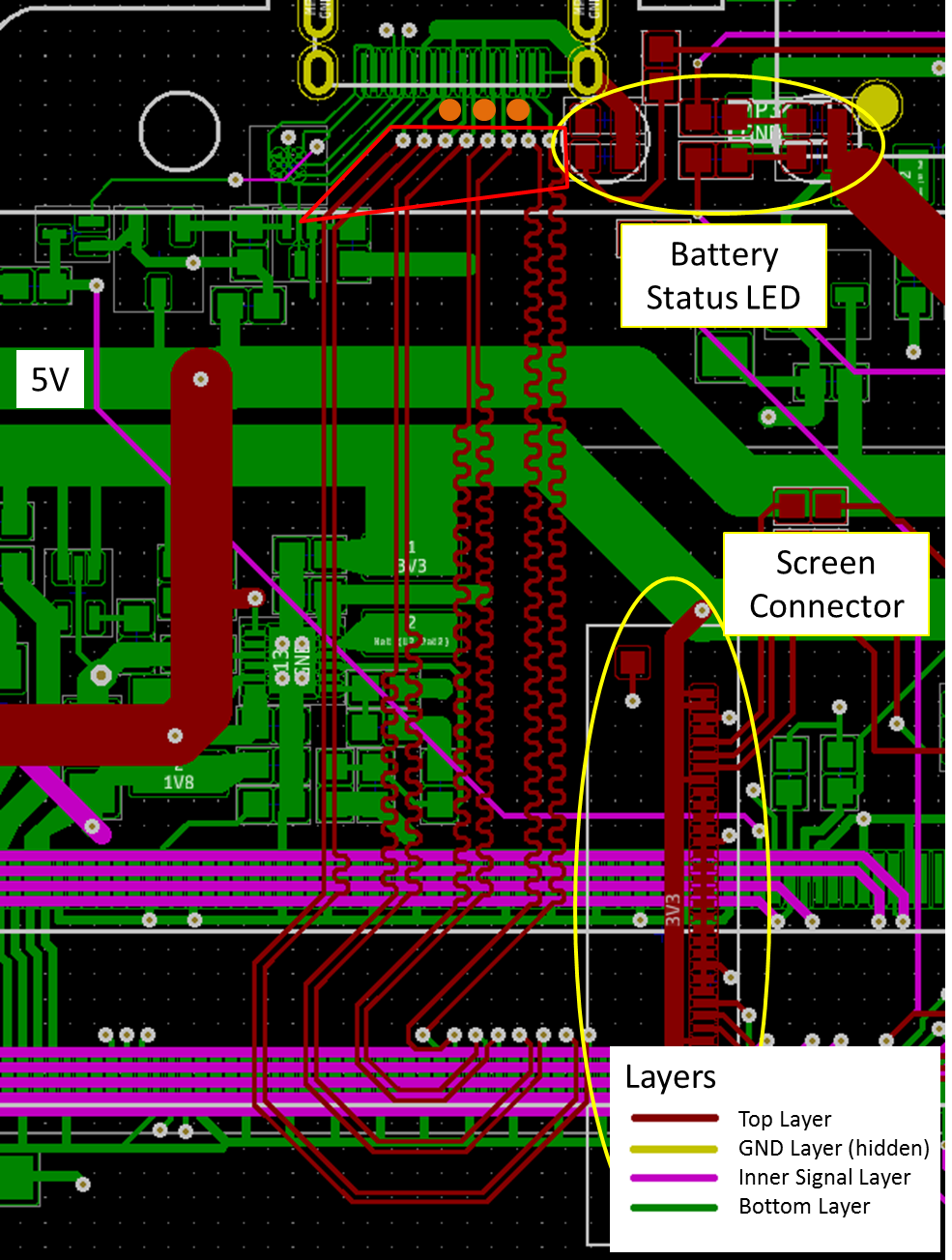 Before you start advanced stuff like delay matching, you would design a correct differential pair impedance of 100 ohm. What's the exact stackup?

HDMI allows for 0.2*tchar of inter pair skew, which relates to 10 cm trace length, no actual problem here.
A

O, thanks so far. That'll be something I didn't thought about. I will look this up. So the differential pair impedance depends on how thick the board layers are (for example the prepreg layer, as it defines the distance between two conductive layers)? If so, then I would have to calculate and match trace thickness to this boundary conditions of my PCB, as it surely will affect the impedance, right?

Trace width and spacing can be varied to tune the impedance. You can use Saturn PCB toolkit for the calculation.
N

The routing /length matching of HDMI differential traces does not look good.
1. Maintain differential impedance
2. Recommended to have a continuous ref. plane below the traces
3. You may adjust the breakout in the connector region to have a better routing
A

Yeah, I know. I just recently learned, that I have to keep distances constant between the two transmission lines of one differential pair. I started too reckless with designing my first differential pair. But I'm just gaining knowledge reading a book about signal integrity. which I should have done before. Another question just came up:
When ordering your PCB, do you rely on the specifications the manufacturer gives you in his datasheets on his homepage (e_r, thickness of the layers) and start designing/calculating your differential pairs on your own? Or do you request a specific and unique close consultation for impedance control?
N

alextie said:
Yeah, I know. I just recently learned, that I have to keep distances constant between the two transmission lines of one differential pair. I started too reckless with designing my first differential pair. But I'm just gaining knowledge reading a book about signal integrity. which I should have done before. Another question just came up:
When ordering your PCB, do you rely on the specifications the manufacturer gives you in his datasheets on his homepage (e_r, thickness of the layers) and start designing/calculating your differential pairs on your own? Or do you request a specific and unique close consultation for impedance control?
Click to expand...

My suggestion is to get a stack up from the PCB vendor if you are in touch with a vendor, or you can use a generic stack up also where the vendor can adjust the trace geometries to meet the impedances.
A

So, now I improved my design. As you can see in a), traces at the RPi and the connector are much more regular and symmetric, hence much closer. In b), the GND plane is displayed. There are two vias between two differential pairs, I hope, they will not disturb my return current path too much? Do you see any problems with my return path at all?
Further, I don't worried about inter-pair skew anymore, as Tchar=888ps, and with a delay for FR4 of about 7ps/mm, a skew of about 126mm would be tolerable (maximum inter-pair skew here is about 17mm), right?
In c), you can see my exact stackup, as taken from the manufacturers homepage. my H would be therefore 2 times prepreg thickness=2*0,116mm=0,232mm (so to say distance between top and GND layer would be 2 times prepreg, if I understand c) correct). I fitted W and S within the specification limits of the manufacturer (mostly 0,15mm for W and S), so Saturn PCB gives me 100 Ohm. Inter-pair clerance is about 1mm.
Then, I redesigned my length matching layout to be sawtooth-like in e), where H=2s.
I'm a bit unsure about my vias. I sized them to be 0,4mm with a drilling diameter of 0,2mm and an anti-pad that has 0,15mm clearance to the copper. Is this properly-sized for wenting from top to bottom through the whole PCB? Because especially the anti-pads size should have a big influence on the vias inductance?

Again, thanks a lot for your advice in advance! 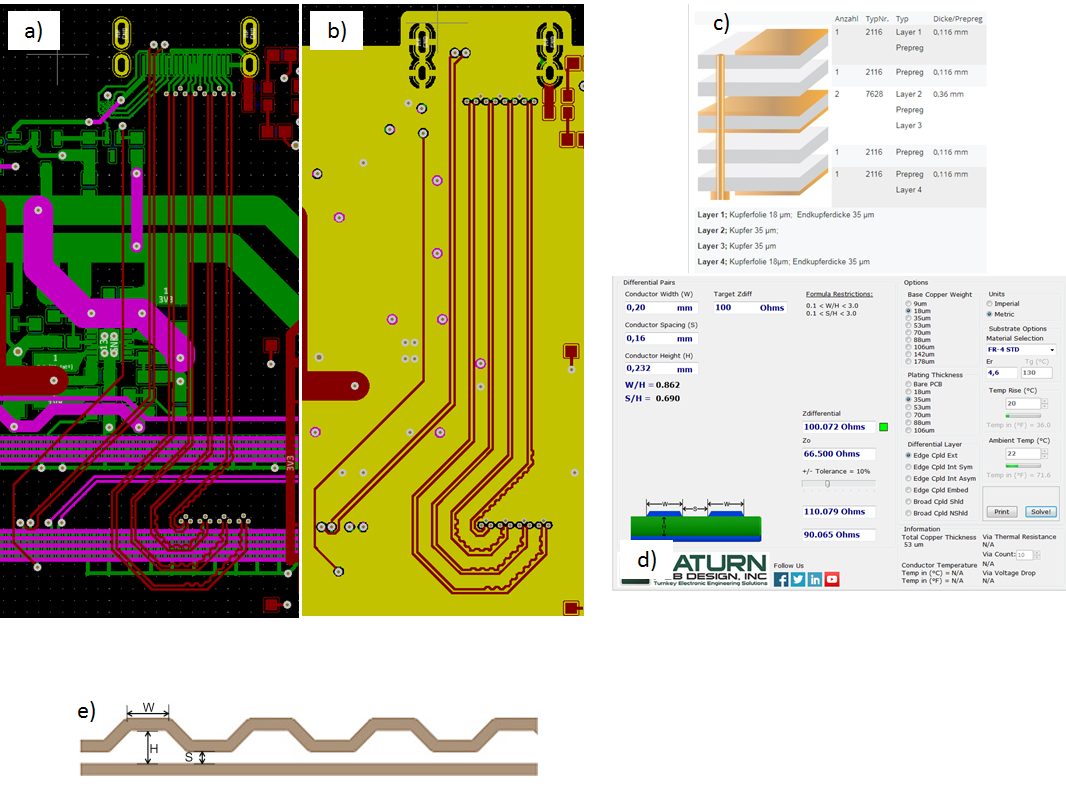