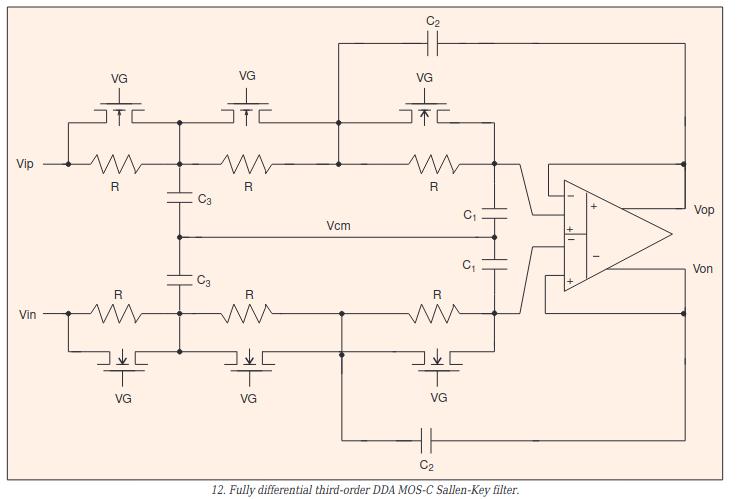 In my opinion, if i want to cancel the non linearity if the NMOS then I must connect a device with opposite charasteritcis, while the poly resistor is linear, I am not sure how it is working


thanks
Sort by date Sort by votes
D

Switched poly resistor segments FTW. Granular enough
to control by code, not by MOS parallel resistance
"analog style", as those would still be nonlinear (even
if second-order scale)

To linearize MOS you'd need to keep each segment in
its linear region (Vds << Vgs) and also deal with body effect
if that varies along the stack (love SOI, problem for JI).
Upvote 0 Downvote

Such construction is less linear for sure. I can imagine that mosfets are used here for trimming cut off frequency in limited range.

Thank you dear friends for your answer,

your answer was useful, the non-linearity can be reduced but not canceled, also depends on which of the resistors are dominating

I have one issue, I usually rated your answer 'helped me' but when I open the post again it looks like I didn't rate it. I am surprised to see that with all of my history post. I don't want to look like non grateful man who only take an answer and leave no rate, so please tell me if you are not receiving my rating

Don't worry. I guess we are not here for the rating. But yes, your helpful rating id there, I can see it.

What were the results of your THD simulations?
Upvote 0 Downvote
J

sutapanaki said:
Don't worry. I guess we are not here for the rating. But yes, your helpful rating id there, I can see it.

What were the results of your THD simulations?
Click to expand...

I am fedup of using CMOS filters, I think Gm-C filter is better
Upvote 0 Downvote
S

OK, 7dB difference. Not bad, but higher power consumption.
I am not sure if Gm-C would be better. It depends on the frequency of operation and how much degeneration you can have. Gm-C can reach higher frequencies, with maybe -40dB or -50dB of linearity. Opam-RC are supposed to work with better than that distortion.
Upvote 0 Downvote

These numbers doesn't look good. The most probably because of use mosfets as resistors.
If we consider opamp with 60dB OL gain, 3V output swing (so 3mV directly at input), differential pair in moderate inversion generate -95dB of HD3, so if we add 20dB of other sources in opamp, it is still 20dB above.
Upvote 0 Downvote
J

I am seriously thinking iof using the gm-C filter
I will tell you my experience,

I went for MOSFET -C filters because the tunning range is very wide from low 50 Hz to 5 MHz, and I was not sure if you can stress the gm to cover this band.
So for me linearity was not expected to be good when I used the MOSFET-C, it is comparable to the Gm-C ... but here I could tune it for the required bandwidth.

If you think that still gm-C filter can afford such tunning range, then I am keen to start working on it

You need to tune current by 5 orders of magnitude. If you make such bias circuit working than Gm-C cut off frequency tuning be also working.
Upvote 0 Downvote
J

By the way friends, my filter circuits work fine until I layout the feedback capacitors, then performance start to degrade, and some times too much. my circuit is similar to the one in post one.

I am using poly1-2 CAPs.
I extracted the design with only R and no problem.

My minimum C unit is 0.9 pF, which I was thinking that is far away to be affected by parasatics,

I am using symetrical output routing

Junus2012 said:
then performance start to degrade, and some times too much
Click to expand...

What does it mean? Your cut off freq is lower or something else?
Upvote 0 Downvote
J

Dominik Przyborowski said:
What does it mean? Your cut off freq is lower or something else?
Click to expand...

The cutoff frequency and the transfer function as well,
so the simulation before cap layout was showing me roll off = -76/decade, but after layouting the caps it becames -68 dB/ decade.. which means my filter is no more butterworth.
Upvote 0 Downvote

Ok, so nothing special.
Annotate parasitic, add them to schematic and compare results.
If the same, then trim your poly caps to get proper results. Redraw, reextract, resimulate.
Upvote 0 Downvote
J

Dominik Przyborowski said:
Ok, so nothing special.
Annotate parasitic, add them to schematic and compare results.
If the same, then trim your poly caps to get proper results. Redraw, reextract, resimulate.
Click to expand...

That is what I am right now doing, I am tunning Q by trimming the Caps to correct the filter response

For this values I am using

The matching array is

and I am changing the capacitors to metal cap instead of poly cap, may be it has less parasatics,
Upvote 0 Downvote
S

This is normal. After layout it is expected to have your filter characteristic all screwed up. That's why you should simulate with parasitc caps extracted. But this should not degrade your DC performance.
One other way of fixing the characteristic after layout could be using the cadence optimizer. I think it used to be in ADE GXL, but with Maestro, I heard they pushed it back into the assembler, not sure.
You can create a filter characteristic mask, then put analogLib caps in the filter nodes and run the optimizer so that it can change those analogLib caps in a way that the filter characteristic stays into the mask. After that you know how much you need to increase or decrease your real caps to account for the parasitics. Maybe a couple of iterations will be needed.
Upvote 0 Downvote
J

Thank you friends for your help

I am giving you feedback based on this discussion,

your answer helped me to improve the filter response. the cap and Q are iterated until I recovered the response. In the filter design, it is preferable not to use unit capacitor less than 1 pF, otherwise the parasatic can be dominating.

I prooved by simulation that metal cap has less parasatic than poly cap and less parasatic does not only means less deviation to the cutoff frequency, but the parasatics can creates a new feedback topology that change severely the filter response
Upvote 0 Downvote
D

I think a fundamental problem will be small signal vs
large signal behavior. Large signal will expose the FET
nonlinearity as a loss / distortion component, more
clearly than AC small signal analysis, unless the
"forward" and "feedback" resistors are kept to
identical operating points (incl Vbs, which is difficult
for NMOS on junction isolated technology). You might
see sensible-looking operation when VIN=VOUT=0
but not when VIN=1, VOUT=-1 (or whatever).

A transient analysis with upper-bound signal levels
might be informative? Particularly if the "effective
resistance" deviates from small signal resistance
significantly as you traverse the signal range.
Upvote 0 Downvote