what is the rule to use either the poly poly cap or the metal metal metal cap in the analog IC design, is there any rule regarding the range of frequency ?

POP caps are not routing barriers, MOM / MIM
caps are.

POP caps and MIM / MOM caps will have
different electrode-roughness characteristics
which bend the relation between capacitance
density and reliability / breakdown. I once used
to work in a technology where they chose
molybdenum as metal1 and metal1.5 (top plate
for caps, only) all due to the lovely low surface
roughness, enabling a superior density*reliability.
But that's extinct and unlikely to be seen again.
J

Thank you for your reply

The both capacitors types are available in my technology,

I am using the capacitor as miller compensation capacitor so I don't think I will have breakdown voltage issue, and by the way the MIM give more capacitive per area (almost 1.4 higher than poly Cap) which should be benefit to save area although the temperature coefficient for cap poly is better.

below is the snap of the Poly Cap parameters 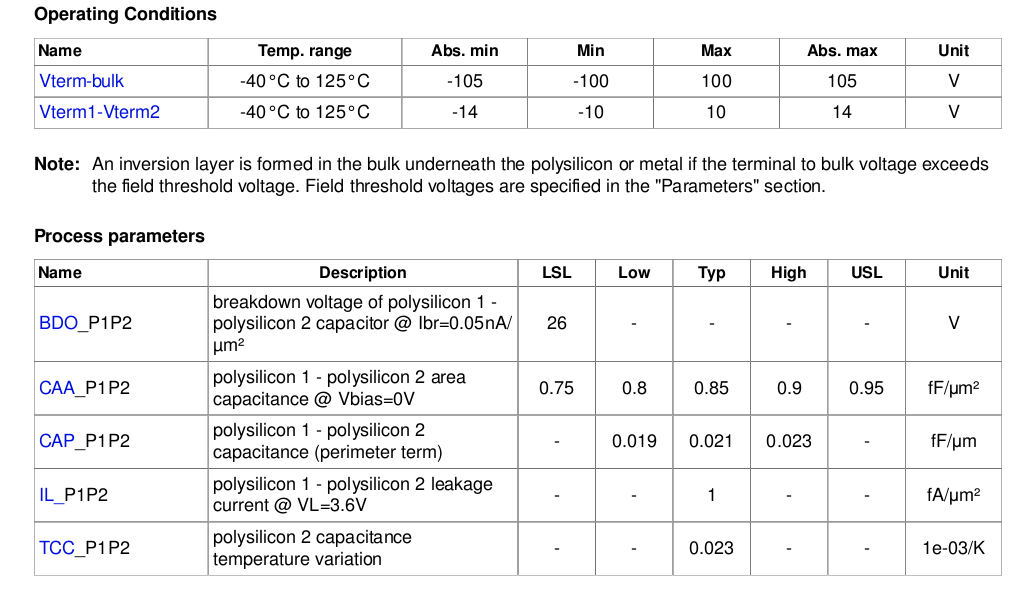 and below is the snap of the MIM Cap parameters 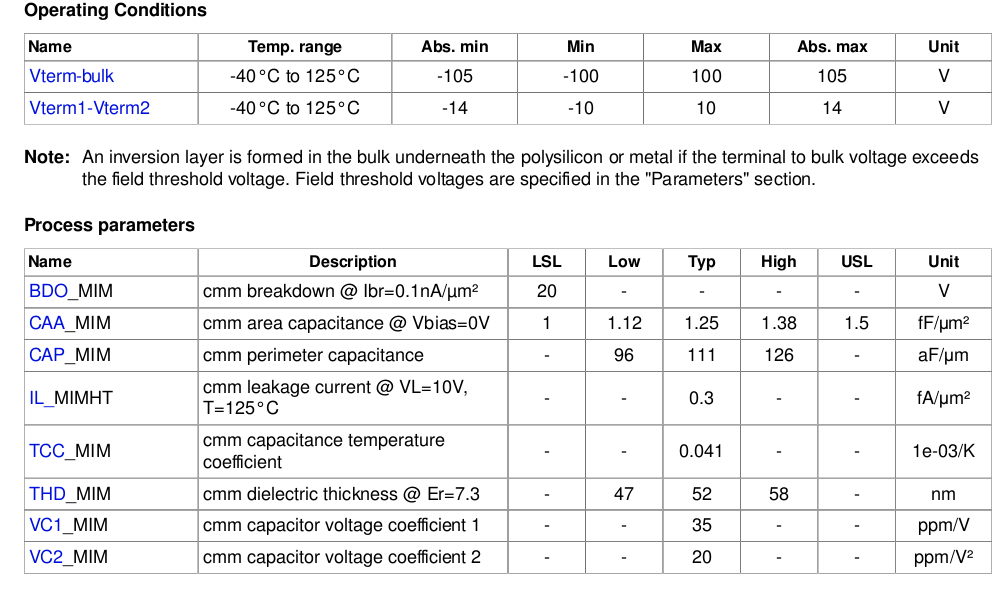 Is there any preferences that one should think about the used material, for example the MIM cap is using Met 2 and Met 3 while poly Cap is using poly one and poly 2

Thank you once again
D

If the object is a low-level cell for a library, then
cell design rules might include a requirement
(or emphatic suggestion at least) to not throw
routing barriers, constraining the layout to lower
metal layers. Perhaps less of a thing today, but
back when you had only 2-3 layers of metal it
was common to insist that standard logic cells
used only metal1; in 6LM technology I saw this
relax to allow metal2 as well.

Kind of surprising that a MIM cap dielectric
would show a strong tempco. Is it perhaps not
a SiO2, but something more polar (like Si3N4)?
The Er (relative permittivity) of 7.5 is neither
SiO2 nor Si3N4. It is close to alumina, indicating
the dielectric may be formed by oxidation of
the bottom plate (in which case you care a lot
about how that etch process before the MIM
oxidation, leaves the surface condition).

A paper on Al2O3 dielectrics indicates a pretty
low TC at sensible IC application temperatures
(albeit it's about polycrystalline Al2O3, which
may deviate from single-crystal alumina, and
who's to say which the MIM dielectric most
resembles)?


Anybody know how to strip Google search
embedded link garbage back to a direct URL?
J

dick_freebird said:
If the object is a low-level cell for a library, then
cell design rules might include a requirement
(or emphatic suggestion at least)
Click to expand...

That was a usefull point, since in my technology I can use three metals only.

Thank you very much