LED batteries and set up

I wonder if someone would be kind enough to help me? I have recently decided to fit a LED single bulb into my products. But im having a few problems, and i dont want to guess, beings that it involves customers. [which i respect]

My requirements is for the LED battery[ies] to last approximately 12 months[?] before changing. And i assume the the actual bulb can last 10yrs+.

Could anyone suggest what type of battery[ies], or 'set up' i would need to achieve this?

With a 5mm LED that consumes 10mA a good quality car battery will last about 140 days.
V

Vbase said:
With a 5mm LED that consumes 10mA a good quality car battery will last about 140 days.
Click to expand...

Thanks for your reply Vbase. Sorry i should have mentioned a usage of 1.400 hrs [approx]. before changing the batteries.

Am i 'barking up the wrong tree', and needing something far larger than 'coin' or 'AAA' batteries? ... [can i do this without 'transformers' or any external wiring?].

There are tiny fairly dim LEDs and there are big very bright LEDs. The tiny dim LED uses low current and the big bright one uses lots of current.
But you did not say what the LED will do. Is it simply an indicator that can be fairly dim or is it for brightly lighting a room or yard at night?

If you use a circuit to briefly blink the LED a couple times per second then it is turned off for most of the time but is still fairly bright and its battery can be much smaller or last much longer than if the LED was turned on continuously.
As the battery runs down then the LED brightness also runs down unless you use a circuit to keep the current constant.
B

High capacity batteries will be useful, but can you use them? How much available space do you have? You might get the energy from other sources than the battery, for example, solar light during the day. If you can achieve that then you could reduce the battery capacity (and size too).

The mathematics is not difficult.

If LED current is 10mA (i don´t know) and you you draw this current from a battery over 1400 hours, then

Mind that batteries (especially lead car batteries) have self discharge.
Battery manufacturers have datasheets of their batteries. Read them.

Thank you for the replies, your very kind.

The item i intend to fit it into, is a cast polyester pyramid. [shown in my website https://www.orgoneuk.com/] I intend to drill out a hole from the bottom, to the base of the crystals, and insert the bulb, thus illuminating the crystals.

My only specifications is to keep the battery as small as possible, [which i will fit to the base]. And for the customer not to be changing the battery every month. I think the minimum of 3 months would suffice, equaling approximately 110 hours.

If someone could tell me exactly what i would need, it would be greatly appreciated.

Thanks again, Vince .. [PS im sorry about not uploading a picture, but it was telling me 'bad email address']

110 hours at 20mA is 2200mAh. You need two Name Brand AA alkaline cells to light a little red LED or 3 or 4 AA cells for white, blue or bright green. The LED will gradually dim during the 110 hours. It will probably not be visible after 110 hours.
Most LEDs have a very narrow beam of light but some produce wide angle light that you need.
A series current-limiting resistor is needed.

I think any expectations for bright, long hours of storage and fit into a small space are not realistic.

Even the smallest I would consider is too big for your application and too short a runtime.

60mW would only radiate ~ 6 lumens from a great choice LED +/-50% and would be attenuated from your plastic transmission losses by 99% and thus end up being at best a gentle glow in the dark.

I have tried not quite similar clear crystal pyramids or photo laser etched monoliths and found I needed at least 10W to compete with ambient twilight.

can you get away with tiny magnet wire and remote power for just a base?

how many do you need?
V

In reply [SunnySkyguy]. So you have tried [almost] the same thing then? ... In regards to the lumens, i am with not concerned with using it as a lamp, but *only to illuminate the 'crystals'. I have done a test on one of my pyramids, using parts i got from a novelty 'LED torch cigarette lighter', and i did have good results. But as discussed, it probably wouldn't last too long.

Regarding "can you get away with tiny magnet wire and remote power for just a base?"... Unfortunately i really dont want to do any kind of plug-in devices ... Hmm ... And just to answer your other question [SunnySkyguy] .. "how many would i want?". I would need at least 50 [having tested one]

... Again, many thanks for the replies. Much appreciated! Thank you!

CR-123A Primary Lithium 3.0V is not a coin cell. It is more the size of 2/3 one AA battery with 3.9Wh. capacity but perfectly matched to LED voltage for white with slightly more capacity than the best AA Alkaline battery at 1 to 1.7V

It also has a more fixed voltage during discharge, hence more constant current discharge and brightness than Alkaline.
The battery voltage of Alkaline will drop 10% then >33% to get most of its life, while Lithium stays at 3.0V for most of its life.

Many Thx 'SunnySkyguy' ..... I think i may now be ready to buy the materials :-D ... Would there be any chance of informing me of the 'run time', and resisters needed, with these two types of batteries :

[i will be using a 5mm white, and blue LED bulb]

Since White LED is actually a Blue LED substrate, both have the same threshold voltage of around 2.85V at <10% of rated current and both 3.0-3.2 at rated current depending on chip size. Batteries will drop V with rising current according size too but these types are best for low effective series resistance.

If the beam is too sharp, sand the lens tip to dull/diffuse it. But sharp angle may look better in the right position. You can solder with AWG 30 magnet wire to LEDs, but not to batteries. This needs a tinned spring loaded contacts. Most coated wire can be burned off with solder but 5mm LED can handle 3 seconds only to cathode, never >5.

there is more to this than meets the eye.

A white or blue LED needs about 3.0V to 3.8V so the batteries probably WILL NOT WORK, especially since their 1.5V or 3V will drop as they are used. That is why I kept mentioning a 1.8V to 2V red LED.
My projects that use blue LEDs are powered from four AA alkaline cells in series that make 6.4V when new and the blue LEDs are still visible when the voltage has dropped to 4.0V. My Chinese flashlight with 24 white LEDs is powered by three AAA alkaline cells that do not last long and I can see the light dimming as the voltage runs down. I am timing it right now powered by cheap Ni-MH AAA rechargeable cells.

Will each pyramid use TWO LEDs? A white one plus a blue one? Then the current is doubled and the running time is halved unless each LED is dimmed.

Next:
- Nickoli Tesla should be Nikola Tesla
and
- place a button on your web site to turn the music off,please

Audioguru, if you use your assumptions on battery chemistry and LED experience. You are correct, it wont work everytime.

If you follow me with the correct choice of HB white and Blue LED's , it will work, since Vth is <=2.85 and these primary Lithium batteries stay at 3.0 for most of their useful life.

All my white LEDs are from cheap Chinese solar garden lights and my blue LEDs are from Agilent (formerly Hewlett Packard but they have another new name now) and are over 3.0V when fairly bright with 10mA or more.
I have never seen a CR123A battery but Varta and Energizer rate its capacity when its voltage has dropped to 2.0V which will not light a white or blue LED.
Energizer's datasheet shows its voltage is less than 3.0V when it new with a 28.5mA load so it will also not light my white and blue LEDs even when it is brand new.

Audioguru said:
All my white LEDs are from cheap Chinese solar garden lights and my blue LEDs are from Agilent (formerly Hewlett Packard but they have another new name now) and are over 3.0V when fairly bright with 10mA or more.
I have never seen a CR123A battery but Varta and Energizer rate its capacity when its voltage has dropped to 2.0V which will not light a white or blue LED.
Energizer's datasheet shows its voltage is less than 3.0V when it new with a 28.5mA load so it will also not light my white and blue LEDs even when it is brand new.
Click to expand...

You should state your assumptions then, worst case cheap garden LEDs are not recommended but may work.

(A white or blue LED needs about 3.0V to 3.8V so the batteries probably WILL NOT WORK,)
Click to expand...

White or Blue high bright (HB) LEDs have a threshold is near 2.5 but ESR linear asymptote is around 2.85 and actual Vf forward voltage depends on W capacity * ESR of LED {[ W*Ω ~1 ]}, which you ought to know from my many blogs in the past.

Choice of battery and LED require skill and experience I outlined. Both high efficacy LEDs and the chemistry of Lithium I mentioned are very stable and tight tolerance at low LEDs current. Often within a few mV at threshold, so the current is predictable.

The key is these Lithium battery types have much lower ESR than the LEDs at this current, so there is minimal voltage drop from 3V. As you know the termination voltage is often rated for 0.1C or higher and not <0.01C like this application. The lower the current drain the higher the EoC voltage which may be around 2.85 V where these LEDs grow dim. So in essence not regulated but lit dimly for the life of the battery. Any regulation may drop efficiency or life time a lot from the power lost in the series resistor.

As I predicted below; 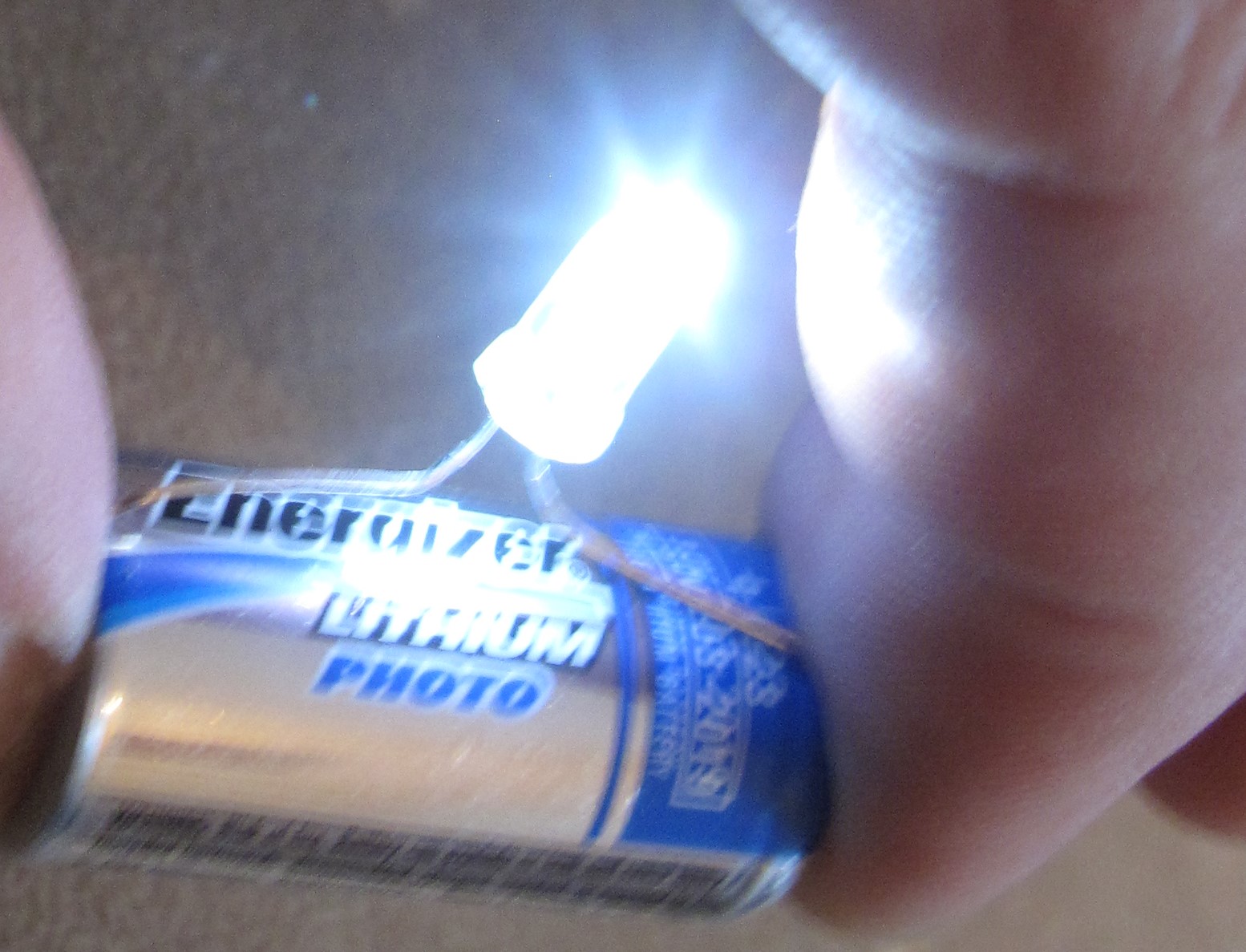 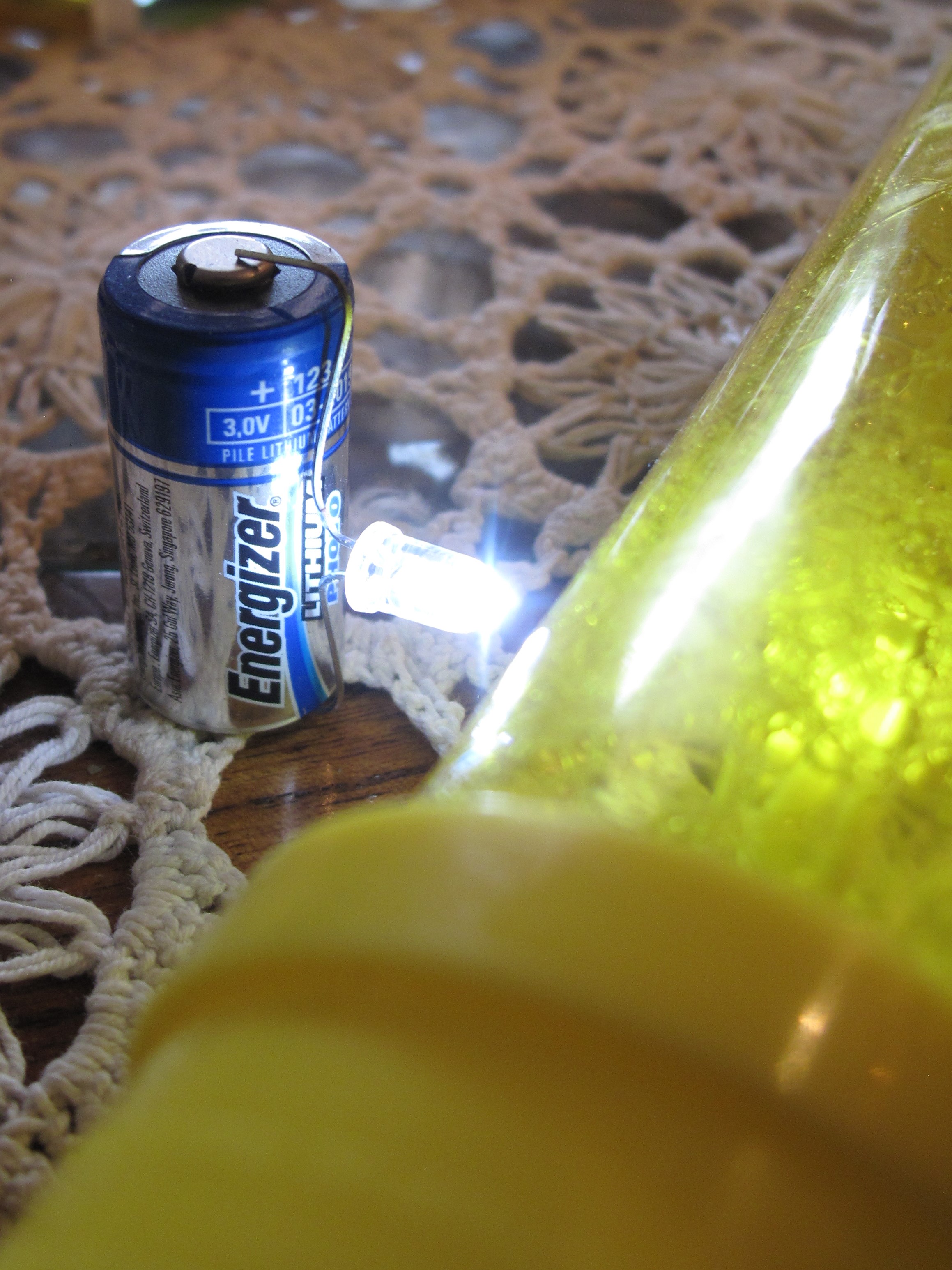 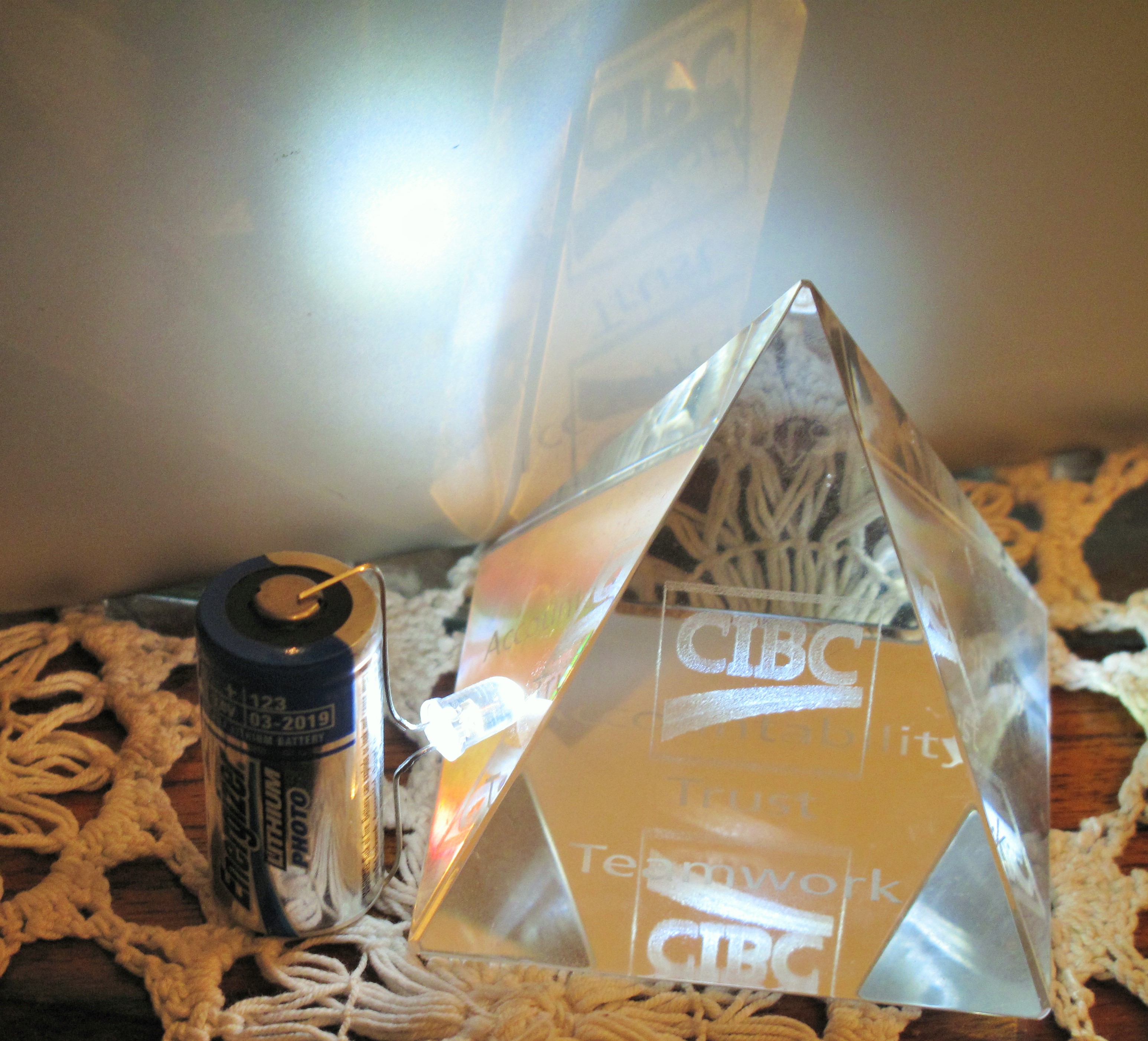 The CR123A battery was lying around in the drawer for a long time unused and Mfr dated 0509A and I have probably shipped over 1m white LEDs that would all work in the method using less than rated current for small size parts with over 10Cd or >10,000 mcd. ( although I have some 3x that in 5mm)

SunnySkyGuy, you have some very bright fairly wide angle white LEDs but you say you also have some that are 5mm. Then what size are the white LEDs in your photos? 10mm?