Is it good to have many, few turns in an inductor?

I'm selecting ferrite core to create a resonant inductor in an LLC converter.

I'm only now dealing closely with the construction of inductors.

After studying some information, I realized:
- The ferrite parameters indicate the value of the inductance per turn (AL), through it you can find out the final inductance: L = AL * N^2.

Since the inductor must be designed for high power and I have not yet quite accurately determined the method for calculating the overall power - I chose the PQ5050 (N87) ferrite, where the inductance of one turn is 6500nH. Based on the formula above and the required inductance, I got a value of 1.67 turns.

This confused me, since powerful inductors usually have many turns.

Ok, I thought it was due to the high cost of such ferrite and started looking for ferrites with lower AL values already having an air gap.

Something is closer, but still it seems to me that something is wrong.

I found a similar powerful inductor. The diagram shows that it is big dimensional and there are many turns.


Question: Would a large number of turns on an inductor be better than a smaller number?
Or am I doing something wrong?

I have not seen powerful inductors with 1-2 turns.

If you want a larger number of turns, then you'll need a different core. You've got three things you can control, pick two.

" Would a large number of turns on an inductor be better than a smaller number?" How do you define "better"?

barry said:
How do you define "better"?
Click to expand...

It is 13A..thus one kind of "better" may be low loss. Shorter wires have less power dissipation at same diameter.

For an AC inductor of given core cross section, frequency, voltage and maximal core flux determine the minimal number of turns. The air gap is varied to adjust the inductance.

For > 100 kHz, the core flux has to be reduced according to the loss characteristic. You should also consider winding skin effect and e.g. use litz wire.
E

at 100kHz you can come up to 80mT, so if the applied volts / current to the inductor go down with freq you can incorporate this into the design ( as the flux will also drop with freq in that case )

Thank you for the answers!

Sorry to answer a little late. During this time, I additionally studied everything about inductors and began to better understand some of the details.

300mT @ 400 or even 100kHz will cook your core and the fringing B field near the air gap will cook your wire - build, test and try not to burn your fingers too much - happy designing ...

At the moment, I was planning to use only one inductor.

Approximately 9.8 turns and a maximum saturation current of 48A.

The only thing is that in its datasheet the AL and ue values are indicated only for half of the core (this is visible due to the g parameter in the dimensional drawing). It turns out that as soon as I connect the two parts of the core, the gap will double, and the resulting values AL, ue will change accordingly.

I searched for more details but couldn't find it.
As the gap increases - AL and ue has fall, there will be more turns.


At the same time, RM14, which I chose earlier - the datasheet indicates AL and ue, calculated for the final gap of the assembled core.

Is it possible to calculate the final values of AL and ue from the data of this core?
E

Glebiys said:
I have not seen powerful inductors with 1-2 turns.
Click to expand...

Let us begin at the beginning.

Inductance depends on the core (permeability) and the number of turns. Not on the current or size. Basically a geometry effect.

When you specify the current, you need to ensure that the core does not saturate. In other words, higher current means higher core size (to keep the flux density low or within limits).

When you specify the frequency, you are concerned about the losses. Both core losses and winding losses. The loss is related to the area of the hysteresis loop. Higher frequency gets you proportionately higher losses. Also skin effect on the winding wires contribute to the losses.

So where we begin?

Select the core according to the power required.

Gapped core provides higher reluctance. Reduces chances of saturation of the core. But comes at a cost. manufactured cores comes with fixed gaps and they provide reliability and reproducibility.

Estimate losses. . Calculations may become iterative. So repeat the same calculations for lower losses with a new core.

Glebiys said:
Approximately 9.8 turns and a maximum saturation current of 48A.

The only thing is that in its datasheet the AL and ue values are indicated only for half of the core (this is visible due to the g parameter in the dimensional drawing). It turns out that as soon as I connect the two parts of the core, the gap will double, and the resulting values AL, ue will change accordingly.

I searched for more details but couldn't find it.
As the gap increases - AL and ue has fall, there will be more turns.
Click to expand...

The datasheet values are for a total air gap of 2 mm. If you want Al of 188 nH/n², you can either use two B66367G1000X187 parts or a combination of B66367G0000X187 and B66367G2000X187. If you want a lower Al value, the air gap has to be recalculated considering fringing fields. There are calculation tools like Ferroxcube SFDT or Epcos/TDK MDT. MDT claims to get correct values up to 3.5 mm air gap. A large air gap causes however excessive winding losses, even with litz wire.
Z

By the way...make life easy for yourself and use an offtheshelf gap size.....otherwise it costs much to get the ungapped cores grinded down......(if you do get them grinded, then you simply have to specify your desired AL value and they will put the necessary gap in there for you....they won't even let you specify a gap size...[unless you really scream and scream])
But yes you do have to know roughly how big the gap will be because too big a gap is a problem with leakage flux (fringing flux).

The magnetic design tool software that FvM tells about is the one i uses for the TDK cores (search under EPCOS for it). Its good for getting gap sizes……in fact, if you scale by the same ratios, you can also use it for the ferroxcube cores as they are the same size and shape.

In theory you can use reluctance equation to calculate your AL value for a core with a given gap…..but in practice, its not accurate and so you need the Magnetic design software tool.

But as said, don’t use a custom gap, use an offtheshelf gapped core…and use two inductors if need be, as Easy Peasy said.

From the above common equations, you can figure out your Flux density etc.
If you want a feast of equations for SMPS…then here you are…

By the way. You need to get the Watts/Volume vs Flux density graph for your core so that you can calculate the core loss. This graph will have lines drawn on it for various frequencies.

And by the way, we got some great ferrite cores from a place in China. I think (not too sure) it was called “Pairui” or “Fuantronics”, but I’m not too sure.

BTW, here is a nice course on SMPS with stuff on LLC

**********************
Regarding heating of a resonant inductor in an LLC….i once took apart a 3Kw EV charger (from a reputable company) with a 3Kw LLC inside it. They were using a well coupled transformer and external resonant inductor and even an extra external magnetising inductor aswell. The core for the resonant inductor was the same core as the LLC transformer core (probably because it was same height and could be gap padded to the metal case top). It was a PQ40/40 or PQ5050. What surprised me was that it was also gap-padded to a aluminium heat sink (gap pad thickness approx. 5mm). The aluminium heatsink was a kind of a “tombstone” (50mm*40mm*5mm thick) on the PCB alongside the resonant inductor. The PQ4040 is quite an open core, and so I was surprised to see they’d put a metal heatsink so close to it..and alongside the “Open” bit of the core…as you’d have thought it could have interfered with the flux around the PQ4040 resonant inductor.
***********************
By the way, I thinks its already been said above…with an LLC, you wont need to worry about 400kHz….as you will be in very light load if the frequency goes that high.
With most LLC controllers, you can set a maximum frequency above which you will not go....and if the load goes that light, it just goes into burst mode
Last edited by a moderator: Dec 12, 2020
M

Stop worrying so much about AL and saturation and focus more on core loss and winding loss. Those are going to be your bottlenecks. But unfortunately they're trickier to model (especially winding loss).

I'd recommend looking at Wurth's REDEXPERT tool. It's a convenient way of estimating losses and temperature rise for all of their power inductors. You may actually find something that suits your needs. If not, it will give you an idea of what sort of size inductor you'll need.
Z

..you can use it to find the AL value for a given gap size. 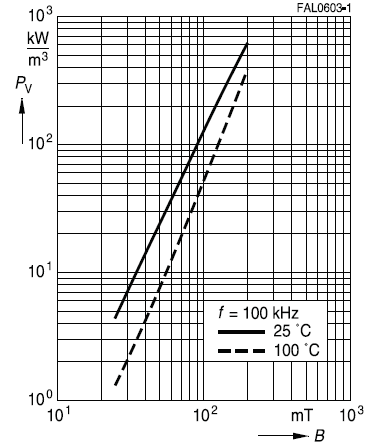 14.7 & 8.1 watts respectively for the total core losses - however these are best case with sinusoidal flux and applied volts - losses are higher for more aggressive edged drive volts ...
E

S
[SOLVED] How many turns On Coil

Z
Shielded switch mode power inductor can have thermal copper pour beneath it?

Dec 27, 2020
zenerbjt
Z
J
Is it a good idea to use rectifier diodes in series to reduce a power supply voltage?

To find Irms, Isat, RDC of an Inductor