I have a situation as below:

Please see the attachment. I am rising current in inductor from 0 to 4.2A peak over a period of 3.5microseconds as you can see in the attachment. I open the inductor at 3.5 microseconds and derive
an induced back emf of 150V .The value of the inductor is 4.7 micro henry. The particular inductor used has saturation current limit of 3.7A and as you can see, I am driving it beyond saturation current. The inductor is off for close to 150ms and again the cycle repeats .

I weighed the following while driving the inductor beyond saturation limit. Physically, when you are rising current through the inductor , the core saturates and even if you overdrive current through the inductor beyond saturation limit, there will very little further build up of magnetic flux in the core.AT this point in time if you withdraw the current and reduce it to 0 A, back emf will be induced in the inductor due to release of magnetic flux. And such backemf should be the same approximately whether you drive the inductor to saturation limit or even beyond. I have found the circuit giving me what /i wanted ..approximately 150V bakcemf at the end of every 3.5 microsecondsfor more than 2 days but suddenly after 2 days the inductor value seems to have come down..from 4.7 microhendry to 1.2 microhendry and I get much less backemf voltage now.

Though I am aware that I am using the inductor outside the saturation current limit ,

the theoritical question here is as follows:

Case 1. Drive inductor till saturation current (ex 3.7A)is reached..The core saturates .At this time , reduce the current to 0...Back emf will be induced to say V1 volts.

Case 2. Drive inductor to a higher current than saturation limit(say 4.2 A) .This should build saturation level flux only. If after reaching the drive current of 4.2A, if drive current is reduced to 0, what should be the back emf induced? According to me, it should be either V1 volts as in case 1 or a little more . Can there be irreversible changes in the magnetisatin characteristics of the inductor? If you need further clarifications on the question, I can provide the needed clarifications

What is your opinion and why

As any inductor with open magnetical path, the said bobbin core coil doesn't show a sharp saturation. Instead the inductance is gradually decreasing with current. The characteristic is well documented in the datasheet. 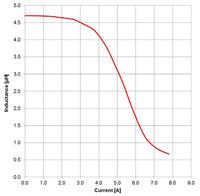 There's no thing like an irreversible change of magnetic characteristic of ferrite cores. If you actually observed a variation in component behaviour (and not an artefact of your measurement setup), it's likely that the high flyback voltage damaged the coil isolation, causing a temporary winding short. This shouldn't happen with 150 V, but there's no explicite voltage rating given for the parts.
W

The flyback voltage cannot really be defined, because once you interrupt the current, the voltage will rise very quickly until all the stored energy is dissipated somehow.

The stored energy might be dissipated by charging any inherent stray capacity, causing the circuit to produce a damped ringing.
Or the voltage may rise until the stored energy is dissipated in some shunt leakage resistance, perhaps even the instrument you are using to measure it.
Or the voltage may rise until the insulation breaks down at the weakest point causing a spark or a flash over.

It seems as though the internal insulation has now failed and you have some partially or fully shorted turns, which will both reduce the inductance and the flyback voltage.
M

HI Folks, Thanks..This is what I thought too exactly as the possible reason for the failure of the inductor in course of time,
an interanl short due to dielectric/insulation breakdown .When the authorised person for resolving the issue was contacted,
there was a claim that there would have been a change in permeability etc. It was said that the inductor uses UL certified
wires etc and would not failed on insulation.....The suggestion was that I should select another inductor with >6A saturation current for my application...That would have been costlier and there does not seem to be sufficient justification for higher current rated inductor taking up more pcb space and costing 3 times more!....I agree totally with both assessments given as that was my own original explanation..I did not find any clue how to limit DI/DT so that I can contain back emf within specific limits. But for insulation failure for which there is no related spec in component datasheet,I feel the design is ok ...Is it not
W

Rather a lot depends on the application.
Voltage rating has more to do with physical construction than anything else.

At only 4.2uH there cannot be too many turns, and the volts per turn might be rather high. A single layer winding would be preferable, with suitable separation between the two ends of the winding.

Perhaps a different brand of inductor, or something a bit physically different may be worth exploring.
Or it could be that the particular inductor had a latent fault in it, you were just unlucky, and a replacement with another identical part might work fine.
M

Replacement has worked fine but this is for product design...and production implementation. Actually, I have had 50 units aged for 2 days in the above condition and I had observed problem in only one unit so far..but it raises concerns on reliability and I am reviewing if design has to be altered. For the moment, I hope the particular inductor developed the defect and there is no issue on reliability. Need to wait and see.Thanks