how this result appear?

hello
I read this equation in a thesis but I cant understand with what assumption the result drive, can anyone help me? 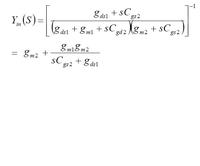 The method for understanding what assumptions the author made is very simple from the mathematic point. You can expand both the numerators and denominators of the original expression and the result. Then compare the two expressions and see which terms are gone and which ones are reserved.

By performing like that, you will see that if gm1 and gm2 are comparable, Cgd2 are small enough to be ignored, and the frequency is not high, the operation is feasible.


perado said:
hello
I read this equation in a thesis but I cant understand with what assumption the result drive, can anyone help me?

perado said:
hello
I read this equation in a thesis but I cant understand with what assumption the result drive, can anyone help me?


I have to agree that using the = sign in the above equation is quite a stretch, as threekingtiger points out you can fully expand the expressions and see what's to be tossed (and assumed!) for that equality to even hold as an approximation.

Plus to get there you need to assume gm1~gm2... very rough math

It looks a lot more straightforward this way...
P

Thanks in advance
I did some suggests of you but the operation frequency isnt very low and is in the GHz range, if its possible for you see this thesis from below link page: 89 - 92 and tell me your idea
**broken link removed**
D

apparently you were onto something because now equation 5.7 in that thesis has a different result - try downloading a new copy of it.

In summary the new expression 5.7 is still wrong
Of course I am assuming the initial form was correct (which I very much doubt now) and that I did not make a mistake in my calculation (very much possible)

I will double check later, you should do the same

It looks like our author (or myself - since I have not rechecked my math) was caught in a moment of mathematical weakness; I am getting from his circuit
Y(s) = s Cgs1 + (gm2 + s Cgs2) / (gds1 + s Cgs2)
which gives the same
Leq, Req, Geq
but
Ceq = Cgs1
which makes a lot more sense

no I was not onto something else, I read this thesis and the equation that I attached above is 5.7 but I deleted gds2 and SCgs1 because these are parallel admytances with Zin(S) in 5.6 ,if you attention, you can see these parameters arent in Zin(S) and then how it is possible to see them in the inverse of Zin(S) !!! 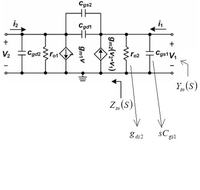 'being onto something' means having found something interesting, specifically you have found a mistake in that thesis... now I don't have my back of the envelope sketch in front of of me but your assumption that (5.7) is not the inverse of (5.6) might be correct, this might be one of the mistakes he makes; on the other hand in the final result I get gm1 in place of his gm2 as Geq (gds2 is negligible)... let's try here:

that placed in Y gives

Hopefully this is clear enough
P

thanks for your complete answer to my question, its so clear and sorry for my weak english language
I think the author of the thesis for calculation of 5.5 and 5.6 did not consider ro2 and Cgs1 and first calculate Zin(s) that is shown in the picture I have attached and after calculation of Zin(s) and inverse it, added them to final admytance equation (5.7) what is your idea about this? 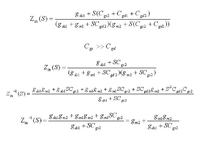 sorry my post sounded offensive to you initially, glad we cleared that out

As of your equations, notice that even if you want to consider the small signal analysis of only that part of the circuit (w/o ro2 and Cgs1), the final result should still be coherent with what I posted, you should end up with
Y(s)= gm1+ gm1 gm2 / (gds1+s Cgs2)
getting gm2 instead of gm1 (even though not completely off in terms of order of magnitude) is still indicative of excessive approximation -there is a factor of 2 between gm1 and gm2 in following sections of the thesis so that would be an unnecessary large approximation

I did not check your initial expression (I will later) matches the new circuit but it seems suspicious to me that
- the first factor on the denominator includes Cgd2 by itself as in the complete circuit impedance it only appear in parallel to Cgs2 and so it can be neglected
- you get no negative sign, which should results from the presence of the miller cap Cgs2

Also
- assuming Cgs>>Cgd w/o assuming gm>>gds is hard to justify as it is hard to have one w/o the other in practice, you should get rid of it in gm1+gds1 before expanding the expression
- neglecting the term in s^2 is hard to justify as we (you made this clear only after the initial few posts) are working with RF and are after a full-range model
P

yes I understand that you write in matrices form like:

now after calculation complete formula of Y1(S) from this matrices what assumption I shoud consider to drive your Y1(S)? (for example Cgs>>Cgd)
Last edited: Jun 12, 2011
D

perado said:
yes I understand that you write in matrices form like:

now after calculation complete formula of Y1(S) from this matrices what assumption I shoud consider to drive your Y1(S)? (for example Cgs>>Cgd)
Click to expand...

oh sorry I wrote wrong I mean Y(S)
ok then with this 2 assumption I can drive your final Y(S) equation, now Is this Y(S) valid for all range of frequency or it is valid just for low frequency?
D

perado said:
oh sorry I wrote wrong I mean Y(S)
ok then with this 2 assumption I can drive your final Y(S) equation, now Is this Y(S) valid for all range of frequency or it is valid just for low frequency?
Click to expand...


yes those are the only two assumptions you need (they should be equivalent specifying saturation as an operating region -unless you go to an extreme deep submicron process...) to derive the final equation for Y(s) valid over the whole frequency range
P

I use 0.18um for simulation, do you mean for this type of technology Y(S) is valid just for low frequency?
D

The approximations I gave you work for saturation and at all frequencies for a 0.18um process, where are you getting the impression I am saying anything about low frequencies?
P

from (5.13) at this thesis or you calculate the Q from the Y(S) that you drived with above two assumption, it seems that Q is proportional to Cgs2 but I see the picture that I attached here at a IEEE conf paper (of course has referenced to other journal papers) that shows Q is proportional to inverse of Cgs2, why is it? 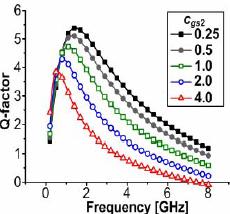 The thesis was very inconsistent from a mathematical point of view and even in the article he states he needs current i2 to calculate the impedance seen on the active inductor input which is clearly not true.

Then in the paper they come up with this mysterious expression that they simulate instead of running spice!? I think your best option would be to actually run spice on a behavioral model and see what happens

Clearly their plots seem to have nothing to do with the small signal model they use: e.g.
- the natural frequency does not depend on Cgs1
- Q factor decreases with Cgs2
and probably more stuff