I rigged up a simple test jig for a coworker for measuring force. It uses a force sensing resistor in the simplest possible circuit. The FSR is part of a voltage divider biased with a 5V reference (which is also the reference for the ADC measuring the output voltage).

I'm well aware that FSRs will have a great deal of nonlinearity in the force-to-conductance response. That's why we're using a load cell to calibrate the thing. However I have also observed that there is a large nonlinearity in the FSR's voltage-to-current response, and this was causing the measured resistance to depend on the reference voltage. I stripped away all the external circuitry so I'm applying a variable voltage directly to the FSR with a DC supply while measuring current with a DMM.

For example, I put a fixed amount of force on the FSR and get the following response: 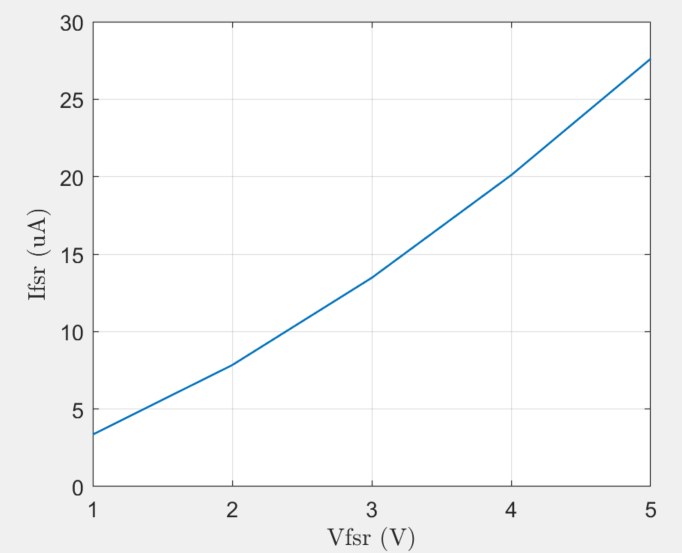 My instruments are calibrated, offsets are nulled, so I'm certain this is actually the FSR's behavior I'm seeing. As I increase the force, the nonlinearity seems even more severe, but I don't have a way to maintain larger constant forces while doing the measurements.

I've looked at various documents for FSRs, and none of them describe this. Many of them recommend the same circuit I'm using. Anyone see anything like this before? Maybe the FSR is faulty?

You know.... this is rathe vague information you give. Why not give more details, like:
* exact FSR type
* DMM type and setup
* schematic (voltage divider part names and values)
* test conditions...
******

If it´s not a measurement problem .... maybe a temperature problem?

What size is it and what tempco is specified?

A photo of your test circuit could give some new information.

You know.... this is rathe vague information you give. Why not give more details, like:
* exact FSR type
Click to expand...

Fluke 87 for measuring V/I. We're using an arbor press to apply force on the benchtop.

The voltage divider is out of the picture right now. I'm directly applying 0-5V with a DC PSU, and measuring current and voltage with the DMM.

KlausST said:
If it´s not a measurement problem .... maybe a temperature problem?
Click to expand...

The FSR is rated for 2.5mA, but the most I've put through it is 200uA. So self heating definitely isn't an issue. Ambient temperature isn't changing much, certainly not over the span of one set of measurements.

What does 'Input Voltage Range' mean in the specifications, please?
M

What does 'Input Voltage Range' mean in the specifications, please?
Click to expand...

Good question. AFAIK there's no reason to limit the voltage applied to an FSR, except for power dissipation. The 0.25-1.25V voltage spec and 2.5mA max current spec don't make sense together; at maximum load, the resistance is still around 20kohm. So you'd never get near 2.5mA while staying within the voltage range.

Honestly, I don't see a reason, either.
But I guess the manufacturer will have a reason.

The press, how do you know the force? Do you use a rubber pad or something similar to equally spread the force over the sensor area?

Does the sensor have 3 wires?

I don't see any specification of FSR resistance linearity in datasheets, e.g. from Interlink the owner of trademark FSR. In my understanding it's well expectable that the sensor element shows considerable nonlinearity due to its physical nature.
M

KlausST said:
The press, how do you know the force? Do you use a rubber pad or something similar to equally spread the force over the sensor area?
Click to expand...

We have a load cell on top of the FSR to get an accurate force measurement. Distribution of the force over the FSR is definitely an issue for the calibration, but I don't see why that would have anything to do with a nonlinear IV curve.

KlausST said:
Does the sensor have 3 wires?
Click to expand...

No just two. Never seen an FSR with three wires.

FvM said:
I don't see any specification of FSR resistance linearity in datasheets, e.g. from Interlink the owner of trademark FSR. In my understanding it's well expectable that the sensor element shows considerable nonlinearity due to its physical nature.
Click to expand...

Are you referring to nonlinearity in the R vs F, or in V vs I? The former is definitely expected. The latter I do not expect, but that's what I'm seeing.

I increased the force by a factor of ~4 and took another IV curve. Here's both datasets and a polynomial fit for each. 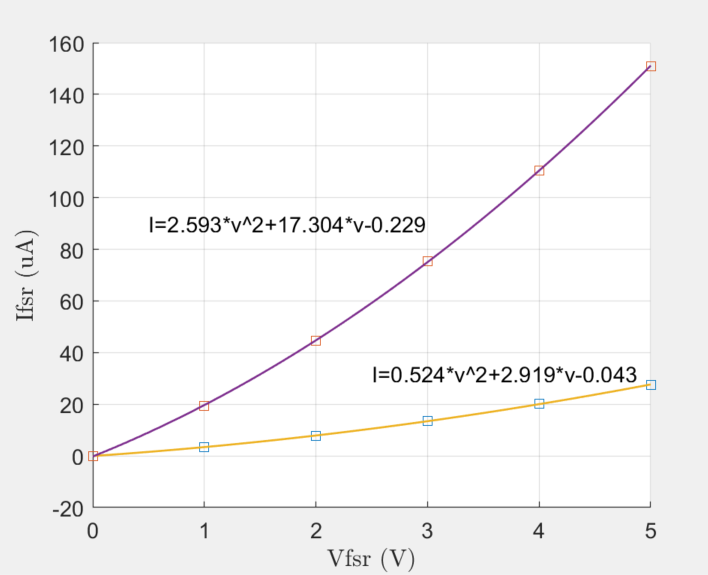 A second order polynomial fit seems to work well, and all the coefficients seem to roughly scale together when force is changed.
Last edited: Apr 14, 2021

Nonlinear resistor I/V characteristic due to its physical nature.
M

Sure, I have no trouble rationalizing an FSR being nonlinear. But I would expect that nonlinearity to be referenced in some literature or app notes somewhere (like nonlinearity in class 2 dielectrics). But every app note I've seen on interface circuits for FSR treats them as a simple variable resistance. Most of these circuits are ratiometric, but if the FSR is nonlinear then the ratio you measure depends on the supply/reference voltage, as I saw in my case. Seems like a big omission which would trip anyone up.