I recently won an online auction for a variac rated:

I don't know and can't really tell how good of a deal I made and I would be very happy with your opinion.
Directly after the auction I started to think that maybe I have missed something because I got it for 766SEK(89.08USD/66.26GBP/75.19EUR) which I feel is almost weird, isn't that a very good deal?

There are more pictures but I did't want to bother with them, I simply looking for you opinion regarding if you would regard this as a good deal or not.

Does it have isolated output?

I'm don't think so, I don't know if it refers to anything else but I know that this is in Swedish a "sparkopplad" transformer which appears to be translated simply as an auto-transformer.

I don't think so but I will ask the seller, I will include the other two pictures as well because it includes the spec. plate. Will probably not get an answer today though as its past midnight here. 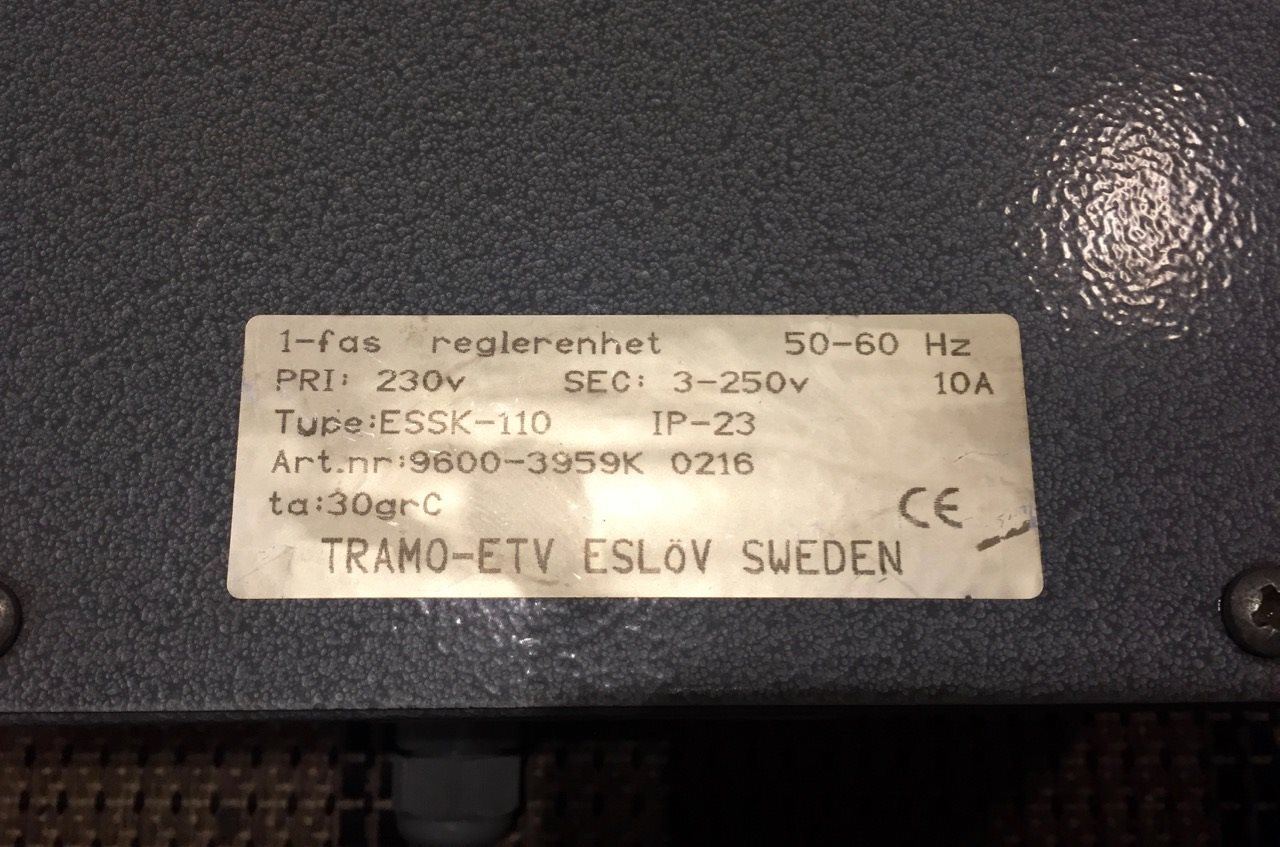 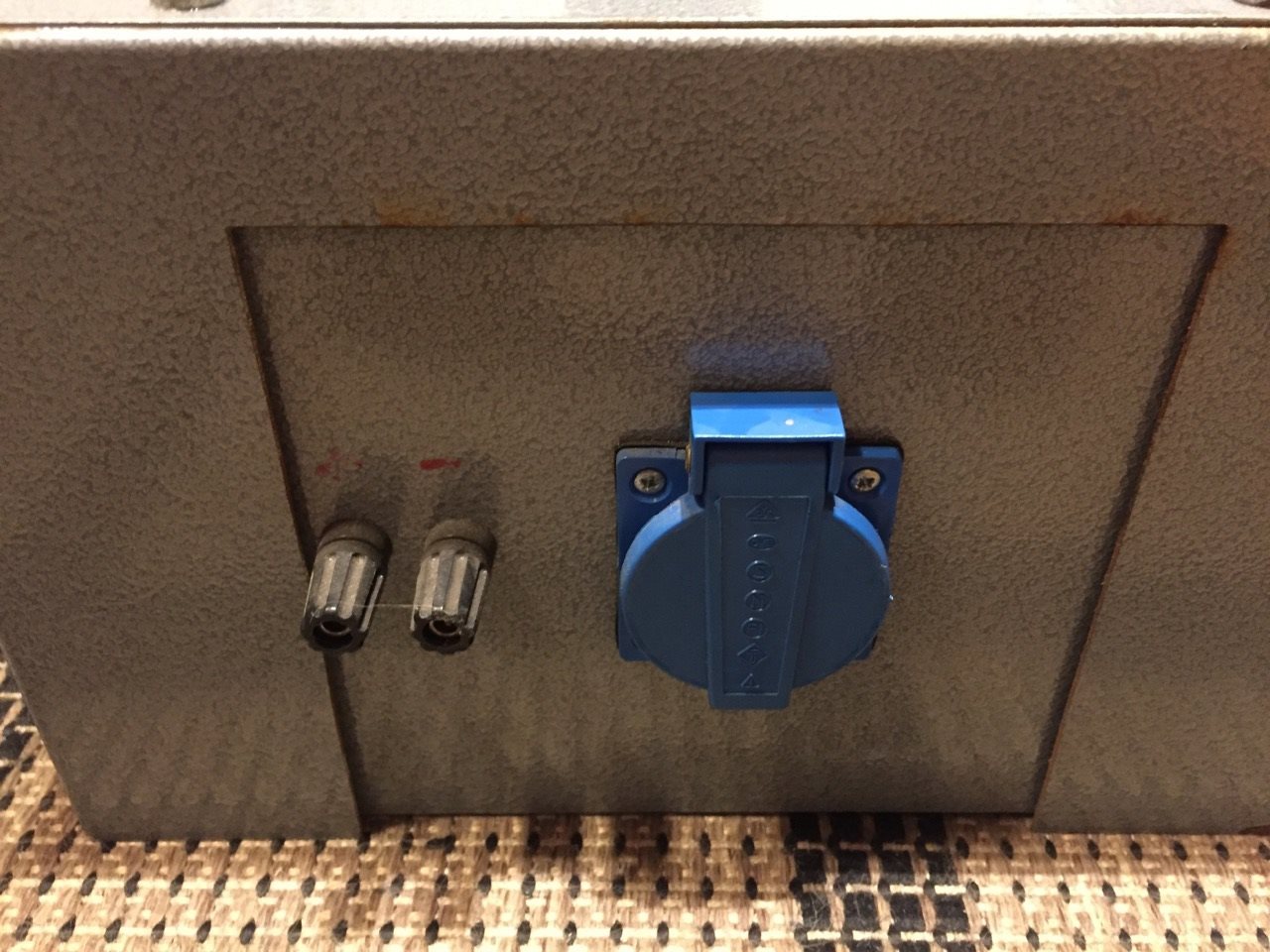 I can't load the PDF but I believe that this is a variety of the products shown on this page which doesn't indicate anything about any isolation.

The last row of the table on that page says "can also be supplied in a enclosure adhering to IP-23" which probably is what I am dealing with.

So to conclude, it most probably does not have isolated outputs.

Aha wait, I feel both rash and thick. But maybe the isolation you where asking about would be inherent in the transformer, a 230V primary and a separate secondary which is the output autotransformer...
C

I too have never seen a variac with a built-in autotransformer.

But I believe that transformers made in Sweden are of very high quality. I have a couple of 230V-120V 100W transformers (toroid wound) that are still good. Of course this is a personal opinion.

Do you know whether the rating of 10A is valid for 250V (high end or low end or middle end)- if the total output is 2500W, then it is an excellent buy. Even for a Chinese.

Why two terminals marked "+" and "-"? Very interesting!
B

I purchased a used variac through Ebay 15 years ago, about $10. 1.75 A max. No enclosure, no calibrated dial, no power cord. It has 3 terminals so it's an autoformer.

It was a bargain for the occasional needs I have. At all times I need to be careful about drawing more current than it's rated for.

Lately I discovered it has an interesting characteristic: variable inductor for use with low frequencies.

An ohmmeter connected to one input and one output should show if it is isolating or not.

Do you know whether the rating of 10A is valid for 250V (high end or low end or middle end)- if the total output is 2500W, then it is an excellent buy. Even for a Chinese.
Click to expand...

10A should be the rated output current. Independent of voltage setting.
2500VA is at 250V output voltage only.

c_mitra said:
I too have never seen a variac with a built-in autotransformer.
Click to expand...

Variacs of that capacity are expensive.

And although yours is used, it appears to be in excellent condition,

I would say it was a good buy.

schmitt trigger said:
Variacs of that capacity are expensive.
I would say it was a good buy.
Click to expand...

A quick check seems to confirm this. Based on the prices from a few sites a new 2500va varaic is more than double what you paid for yours and they typically aren't even in a housing like yours.

Location
In the sewers of the U.K.

The 2 terminals are probably extra output connections added by the previous owner so that wired\flying lead items can be connected to it.
I did similar when I built mine into an enclosure and I must admit - they are the most used connections out of all those I added.

+/- would be the wrong markings so maybe open it up and have a look.
Check the fuses are correct too. (if any)
D

It has been sitting on the floor of my lab/work room for a while now and I if I actually do what I intend to do today I am about to give it a good cleaning over. I can't stand dirty main cables... But it is rather clean as it is but I think that given how long this will be within my ownership I might as well open it up, cleaning the enclosure thoroughly while also discovering the state of the transformer and find out what it really consists of.

One question though, even if the transformer would appear to be in good condition(this question is centred around the unit I will go through today but I generally wonder about this sort of transformer), is there any maintenance that could be a good idea to subject it to?

Like some oil(or lubricant) or some other "treatment" that wouldn't hurt to perform in order to ensure that I really take care of it in the long run, that you are aware of?

About the quality of the transformer, neglecting the effects of the previous users usage of it, the company which produced it appears to be a very old very well respected company selling high-quality transformers and large coils/chokes.

I'm not sure if I would ever have realized the after the fact pretty obvious usage as a large inductor...

I will use my Mastech MS5308 LCR-meter to measure the L and R of the winding(s), I think I have asked this somewhere in some thread about something else before but I never managed to figure out the affect of measuring the winding inductance of an transformer while shorting/not shorting the other winding(in a two-winding transformer) or that situation in general, or for that matter what if I have some kind of SMPS transformer with possible core reset windings and what not, is there some general accepted rule such as "short every other winding except the one to be measured" or does the difference in inductance of winding #1 while winding #2 is shorted and not shorted reveal any information of value or interest(interest as out of curiosity)?
C

You do not need, ordinarily speaking, any special cleaning for the beast; but just a good wipe of the contact area plus a blow dry of the dust (they attract dust like magnets; ever wondered why?) from the inside is all that may be needed.

You should also inspect the connecting hardware, just to be sure. I do not suggest any oil or "other treatment"- the wiper is usually made of graphite and that itself is a decent lubricant (that reside may be needed to be removed with a paper towel).
E

The visual look and features assert it's a perfect deal. I encountered similar (sometimes much lower) features for more than $150.

Aug 2, 2002
FaLiRemo
F
J
where are cheap places to get multilayer PCBs made?

May 18, 2003
Olxx
O
B
Which is better, a transformer with a tap changer on its primary or secondary?