Blog entry Gallery Discussion
Small is a relative term. In the 1990's a small PC socket was a leaded device on 2,54mm pin centers, and miniature was a staggered 2,54mm grid.
In the past 10 years, small was considered 2mm pitch and miniature was 1,27mm pitch. During my time as a product designer of small precision interconnects, a product on 1,27mm was considered small, and a 1mm pitch machined interconnect was pushing the limit. Now I am studying a process called micromachining, which utilizes advanced multi-axis CNC equipment. This process utilizes machining tools as small as 0,4mm to create probe diameters down to 0,1mm. That size is hard to comprehend and is so small that a person is at risk of inhaling the parts.

Micromachined, sub 0,25mm parts, are typically manufactured from super hard alloys such as Palladium, Beryllium Copper, and SK steels. Palladium, although expensive, is the alloy of choice since it does not require plating. Examples of microminiature components are microprobe pistons and caps which are assembled along with a drawn barrel and compression spring to create micro spring probes used to perform in-circuit testing of PCBs and semiconductors. The microprobe pistons even have varied head geometries: Crown, cup, round, square, and needle which serves to pierce oxidation layers on conductive surfaces.

Besides current applications in testing, I can see so many potential miniaturization applications in technologies such as electric vehicles, medical electronics, satellite, robotics, industrial automation, and micro-battery recharging systems. 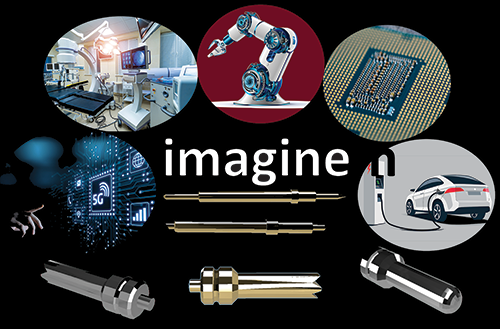